Artist: The Cranberries
Released on: No Need To Argue (Track #5)
Duration: 3:26

Something has left my life and I don’t know where it went to a-a-ahh
Somebody caused me strife and it’s not what I was seeking
Didn’t you see me, didn’t you hear me
Didn’t you see me standing the-ere a-a-ah
Why did you turn out the lights
Did you know that I was sleeping 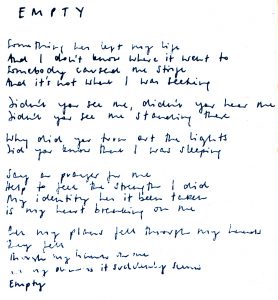