You are here: Cran World » Music » Songlist A-Z » Everything I Said

Artist: The Cranberries
Released on: No Need To Argue (Track #6)
Duration: 3:53

But you have your heart oh
Don’t believe it, and you will (…??)
Waitin’ on
Everything I said, oh, well I meant it
And inside my head, holdin’ on

‘Cos if I died tonight
Would you hold my hand, no
Would you understand

And if I lived in spite
Would you still be here, no
Would you disappear 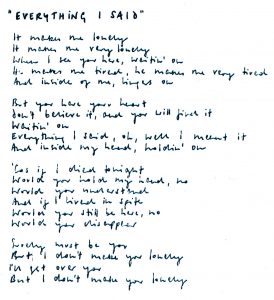