You are here: Cran World » Music » Discography » Are You Listening? 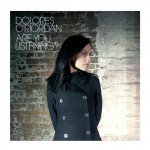 Firstly I would like to dedicate this album to Denise Burton who sadly died in the month of May 2004. Denise Burton – she’s a beautiful woman, I loved her too much.
I would also like to remember:
Mrs Moore (Gil Moore’s mother)
Mrs O’Rourke (Bernard O’Rourke’s mother).

But remembering, but living through the journey that is life. My daughter Dakota (which means friendly). She has inspired me to continue through the darkness, and only inspire brightness.

I want to thank all of you for being so patient with me because a true artist has to breathe. I would also like to thank my mother, Taylor, Molly, Donny my husband and my family for putting up with my absent mindness. They are the ones I truly love. They make me truly happy. Finally, I would like to apologize for my like of contact, and how I have isolated myself. But these are the only means where upon I can grow. I respect you and I love you, and I hope I will not let you down.

Matt Vaughan, wonderful man, wonderful experience. Dan Brodbeck, what can I say, mad in the head, brilliant producer, engineer and doing anything possible to make this album happen (did stupid ever make this album?). Gil Moore, the beautiful man I worked with for two songs as he bereaved his mother. Stu Youg, an amazing man that visited during my journey and brought so much “joie de vivre” into recording. Rich Chycki, who started to make sense out of the whole equation with his amazing touch for, recording and producing and also his eastern European demeaner.

Malcolm Dunbar: Sign Me – Frightened – Freaking out – What the fuck did I just do? Dolores: Sanctuary? – Why? – When? – What?