You are here: Cran World » Archives for January 2000

MTV is offering some CK downloads in conjunction with thier show, House of Style. Each artist has a corner of the page, featuring some cool downloads including high-res Dolores backgrounds and a screensaver. Be sure to check out Dolores’ section here. (LINK NO LONGER AVAILABLE) 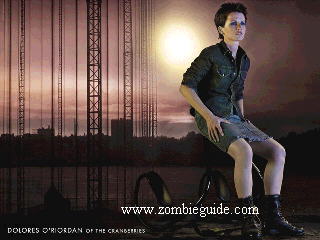 We have some better-quality EPOK scans with smaller tags, too! Check them out:

The CK ads featuring Dolores have been printed and distributed. Below is one of the first of them — a CK promo postcard featuring Dolores sporting Dirty Jeans. I’ve also been told that there are billboards of this image in major US cities! If someone could get a picture of that, that would be great!

Check out this news from the official page of Noel’s new-found fatherhood, and recording for the next album!

The Cranberries have confirmed their first festival appearance this year on April 15, at Esparrago 2000, which is located Jerez (Cadiz area), Spain. This is Soto Grande, Beach. The festival will also include Dover (Spanish), Fabulos Cadillacs (Argentian), Lou Reed (American), Asian Dub Foundation (UK). For more information, go to www.esparragorock.com

Hello there all ye Cranberry heads!

I would just like to thank all you guys for your loyalty and support on our “Loud & Clear” tour.

The American leg was quite good, but Europe blew me away. Just some amazing receptions. I was totally impressed. I loved Spain, Italy, France, etc.

Noel is a dad now and Ferg is expecting in the next month or so. They will busy for a while.

We are going to rehearse and write the 5th album. We won’t record it until August and will do some festivals during the year. Our first is in April in Spain at Esparrago 2000 – So we are going to do ass kicking again – Oh I love Rock n’ Roll.

Hope to see you later this year and hope you had a great Millennium and Xmas!