You are here: Cran World » Archives for February 2017

Good news for those of you who, like us, have been really enthusiastic about D.A.R.K. (Dolores’ side project with Andy Rourke & Olé Koretsky):

Musicradar.com just published a fresh new interview of Andy Rourke ahead of his performance at London Bass Guitar Show on March 5th, 2017.

Asked if the D.A.R.K. project would remain a « one-off » or if there would be more coming from the band, Andy answered :

« In terms of the D.A.R.K project, we are in writing mode at the moment although our schedules are all over the place. Dolores is busy with a Cranberries tour and I’m here working in LA [on a project with Kav Blaggers, former guitarist from Happy Mondays and Black Grape]. But we have a few ideas already. Watch this space is all I can say. »

Let’s hope for new tracks, and that we’ll get to see these folks live one day, ‘cause their rehearsal videos were really promising!!!

We taped one of our rehearsals last year. Which song on the album would you like to see played live? @andyrourkemusic @doubleole #doloresoriordan

Another round of Italian dates this summer

There were rumors band would play at Firenze this summer… this is now officially confirmed!
Festival Firenze Rocks just announced on their website that The Cranberries would join Eddie Vedder to headline the festival on June 24th 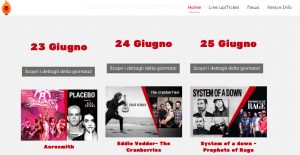 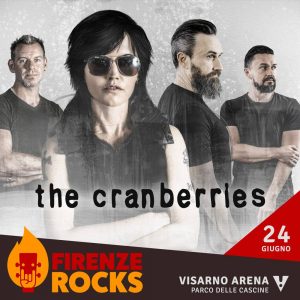 There’s very little doubt this festival performance will be an electric one, like Trollrock (Norway) and Landerneau (France).

UPDATE#1: the band also confirmed 3 other shows on their socials:

It is yet unclear whether those will be acoustic or electric. We’ll keep you updated as soon as we get more info.

Tickets will go on general sale this Friday morning at 11:00 am.
Be warned, there will be a pre-sale this Thursday 10:00 am on Livenation.it!!!

Thanks to Massimo on Cranberries Italia for noticing, as well as Dolores from Croatia 😉

UPDATE#2:
These 4 performances will be ELECTRIC. Livenation Italy just confirmed this info to us by email.
Thanks to them for being so fast!

The suspens is over!!!
Since The Cranberries had announced summer festivals dates, some fans were wondering whether these performances would be acoustic with the string quartet, like the indoor tour announced for May & June 2017, or if they would be regular “electric” shows.

The Cranberries World team contacted festivals Trollrock (July 29th), Marbella (August 5th) and Landerneau (August 11th) to shade light on this, and Trollrock has just answered to confirm the band will be giving an ELECTRIC SHOW in Norway on July 29th.

We’re still awaiting feedbacks from Marbella & Landerneau, though it now makes almost no doubt that these summer festivals won’t be acoustic shows.

We’ll let you know as soon as we hear back from other festivals, Poland included.

Last but not least, thanks to Atle, from Trollrock, for this information.

UPDATE#1 (Feb.21):
LANDERNEAU answered us to confirm the band will be giving an ELECTRIC PERFORMANCE at their festival too on August 11th!
A major THANK YOU to Carol, from Landerneau.

UPDATE#2 (still Feb.21):
Same for the FOUR ITALIAN SHOWS in Piazzola sul Brenta, Firenze, Roma and Cattolica.
Livenation Italia just confirmed these performances will be electric.
A major THANK YOU to Andrea, from Live Nation Italia.

Some new summer European shows for The Cranberries

Seems like the summer will be very intense for the band as some more dates are being added every week on The Cranberries summer 2017 tour:

Yesterday, the band announced they will be playing Guitar Guinness Record (Thanks Jimi Festival!) in Wrocław, Poland on May 1st, as you can see on this link.

A new date was just confirmed this morning at Expofacic Festival in Cantanhede, Portugal on August 3rd.

Just like Marbella (Spain), Landerneau (France) and Trollrock (Norway), none of these festivals are mentioning a string quartet. It is thus yet unclear whether these performances will be performed acoustically or not, though we can note the concert on May 1st is taking place indoor.
Our team is trying to get in touch with these festivals to shade light on this.

BREAKING NEWS: “Why” is the new The Cranberries single! (well, probably)

Yesterday The Cranberries did a press conference before their first show in Cancún, Mexico. During that press conference, Dolores O’Riordan revealed interesting information!

According to Dolores, the first single from the upcoming acoustic album is going to be called “Why“, and The Cranberries are going to film the video for “Why” in Europe!

IMPORTANT NOTE: the sound quality of press conference video is quite poor, so it’s possible that Dolores’ words were misheard.

Dolores also mentioned that the new photoshoot the Cranberries did in Mexico is going to be used for the album’s sleeve (it’s something we’ve already reported before here).

Since yesterday morning, all concerts that are part of the acoustic European tour have gone on sale; a good occasion to review the situation, especially as some shows sold out within few minutes/hours.

BREAKING NEWS: the cover of the next album almost revealed (UPDATED)

During the first show in Cancún tonight Dolores announced before the last song (Dreams) that the band did a photo shoot yesterday, Thursday February 9th in Puerto Morelos, and the picture will be used for the cover of the next album. It is unclear whether this picture will be used as the cover of the greatest hits album with the Irish Chamber Orchestra or the completely new one that is expected afterwards?

Amazing fact, earlier today, an amateur photo of this photo shoot appeared on the internet. Facebook user Cesar Enrique Vera, the guy who took it randomly, didn’t know what was at stake when he captured this moment, he was just there at the right place, at the right time. Masterpiece!

Listen to Dolores’ speech starting at 07:12 on the video below recorded by Cranberries Mexico

UPDATE Feb.11:
Cranberries Mexico was lucky enough to talk about the photo shoot with Fergal, who mentioned that the picture was taken by none other than Andy Earl (who’s very famous in The Cranberries world in case you don’t know) and that they’re not sure whether the photo will be the cover or not, though it should definitely be part of the artwork.

The Cranberries are about to take the stage in Cancún, Mexico
2 days ago they rehearsed for the show: 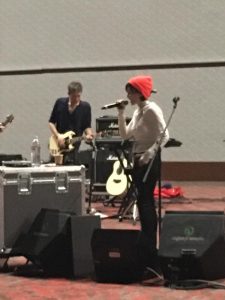 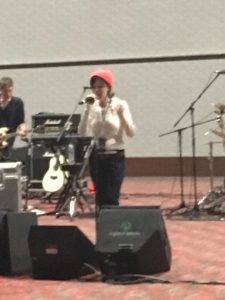 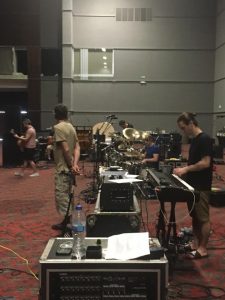 and yesterday they had a photo shoot in Puerto Morelos.
A non professional and behind the scenes photo surfaced today posted by Cesar Enrique Vera on his Facebook account who just was at the right place on the right time: 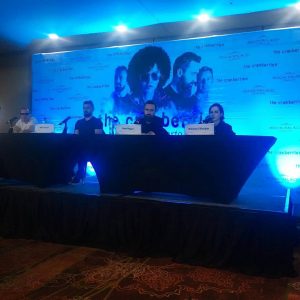 (There is a periscope video on this link)

and before that (or just after? unclear!), there was a Meet and Greet with a few lucky fans who won the official meet and greet contest: 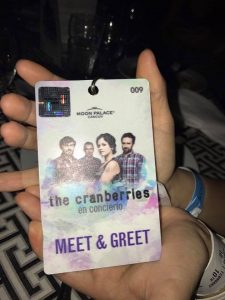 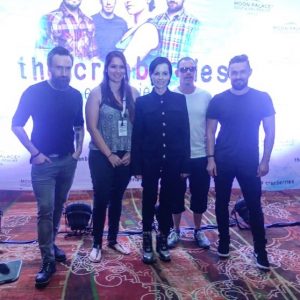 Now time for the show, fans just entered the venue and the first pictures inside are appearing: 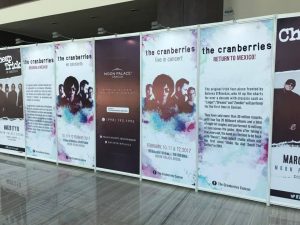 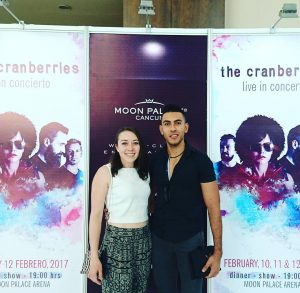 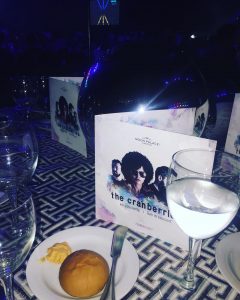 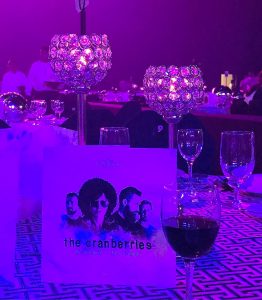 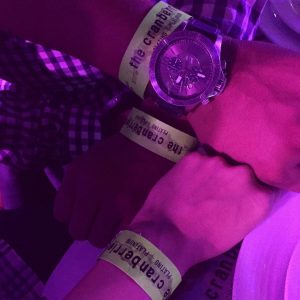 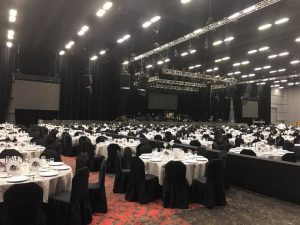 Remember it is a dinner-concert around tables and everyone seated! Quite weird!
Our friends at Cranberries Mexico will try to video broadcast live on CranMex YouTube starting hopefully very soon. 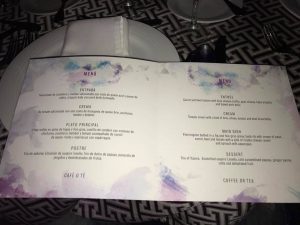 Will you succeed to read tonight’s setlist? 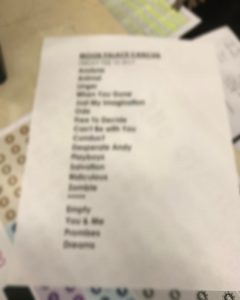 8:58 PM (local time)
There is a live feed on periscope on THIS LINK

9:20 PM
CRANMEX PERISCOPE
When you’re gone, Just my Imagination, Ode To My Family…

10:05 PM
Zombie. Encore: You and Me (it seems that Empty as seen on the setlist was skipped)…

10:15 PM
Promises, Dreams. Outro (Exodus by Bob Marley) END OF SHOW total length 75 minutes
BREAKING NEWS: before the last song Dolores announced that the band did a photo shoot yesterday and it will be the cover of the next album. 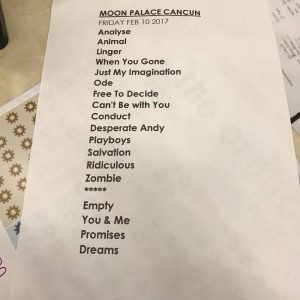 Not a surprise for this one, The Cranberries will play festival “Fête du Bruit dans Landerneau” in Landerneau, France on August 11, 2017.
As you may remember, The Cranberries had to cancel their show last year and the promoter wanted to have them back.

This show deserves a separate news mostly because tickets are not sold through the French promoter’s website (yet?) and is not presented as an acoustic performance like the May/June tour. The artwork does not include any violin. Same thing for the very first show that appeared online last week in Marbella, Spain: it is unclear whether or not these shows are part of the acoustic tour, but we have reasons to think they are not.
So… what’s your opinion? Do you believe these 2 shows are gonna be acoustic with the string quartet or electric ones? 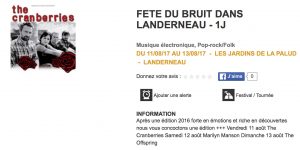 Ticket presales: when and where

As you may know ticket general release for the European shows is set to this Friday, February 10.
However a lot of different presales will happen every day until Friday.
And it started this morning with France, on the promoter’s website where a pre-presale is still available right now. The French shows will then have a presale tomorrow on Ticketmaster and then general onsale on Friday 10.

Here below, in order date by date, presales known so far (when there is), and we’ll try to keep you updated as much as we can.

If you have more info let us know!
All other general onsales can be found on the cranberries official website
All seated, even front row, at all shows.

The Cranberries in concert with a string quartet, European dates announced (UPDATED)

Posssibly more dates will appear soon.
Tickets will go on sale next Friday, February 10 except Italy Feb. 9
Presales: Feb.8 (for a few shows!)
Here is the artwork for the Paris shows: 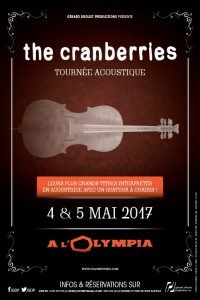 …and the one for Barcelona and Madrid: 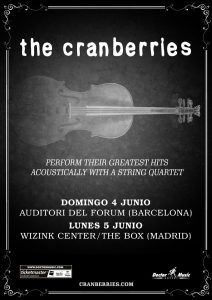 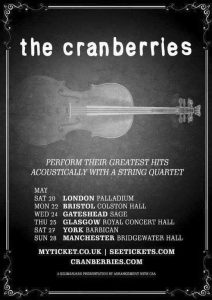 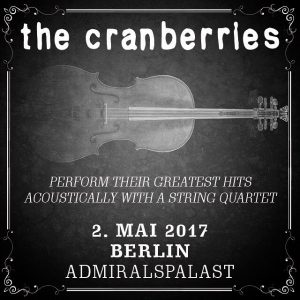 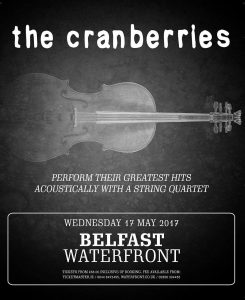 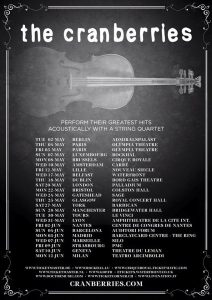 We all were expecting this, it’s finally confirmed!
The Cranberries will be touring Europe this summer following the release of their “Greatest Hits” album with the Irish Chamber Orchestra, due late April, early May 2017.

Festival Starlite, in Marbella (Spain) indeed confirmed a moment ago that the band will be playing on August 5th. Tickets are already on sale, price range varies from €34.10 to €223.96 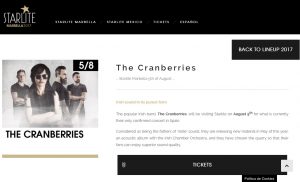 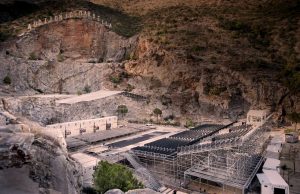 It is unclear, when reading festival statement, whether or not the band will be touring with the Irish Chamber Orchestra, although they’re emphasizing the quality of the sound on festival site, which could mean there might be chords on stage (?)

Chances are quite high we should soon hear from festival Fête du Bruit in Landerneau (France) where The Cranberries canceled their performance last summer. The festival mentioned several times they would be very happy to welcome them for their 2017 edition, and had already started discussing with their agent this autumn.