You are here: Cran World » Archives for January 2007

The attempt by the Heart FM media group to win Limerick’s 10-year radio license, currently held by Live 95, has failed, as the Broadcasting Commission of Ireland announced last Monday that it would award a renewal to Live 95’s license.

The Heart FM group was funded in part by Cranberries members Noel Hogan, Mike Hogan, and Fergal Lawler, among others. Mike Hogan was poised to become a director for the new radio station if it was approved.

Thanks to Thomas for the news.

January 30, 2007  |  Comments Off on Rare Cranberries interview from 1990 surfaces  |  by Zombieguide Archives  |  The Cranberries 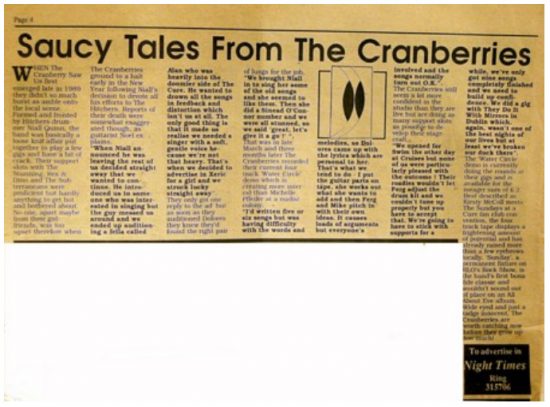 Niall Quinn today emailed us a very rare piece of memorabilia indeed — an August 1990 Night Times newspaper interview to promote Water Circle, The Cranberries’ first demo tape released in 1990. You’ll recall that Niall Quinn was the lead singer for The Cranberry Saw Us, the precursor to The Cranberries. Niall writes, “I was doing some archiving of my own at the weekend and came across it.”

The interview is one of the earliest (if not the earliest) known Cranberries interviews to survive. In it, Noel Hogan talks about the trouble the band went through to recruit a new singer after Quinn left to concentrate on his other band The Hitchers:

When Niall announced that he was leaving the rest of us decided straight away that we wanted to continue. He introduced us to someone who was interested but in singing but the guy messed us around and we ended up auditioning a fella called Alan who was heavily into the doomier side of The Cure. He wanted to drown all the songs in feedback and distortion, which isn’t us at all. The only good thing is that it made us realize that we need a soft, gentle voice because we’re not that heavy. That’s when we decided to advertise in Xeric [Studios] for a girl and we struck lucky straight away.

The girl who responded to that ad, of course, was Dolores O’Riordan.

We brought Niall in to sing her some of the old songs and she seemed to like them. Then she did a Sinead O’Connor number and we were all stunned, so we said, ‘Great, let’s give it a go!’

Niall says that the interviewer was probably Stuart Clark, who is now an editor for Hot Press, Ireland’s largest entertainment magazine.

Niall writes that he may also have a video of The Cranberries broadcasted on Irish TV in June 1990: “I know thereâ€TMs also a VHS cassette in my parents house that I have to get my hands on — it contains amongst other (hitchers) stuff — a very brief glimpse of The Cranberries, They Do It With Mirrors and The Hitchers all busking together (Iâ€TMm not kidding â€“there was about ten of us!!!). Thatâ€TMd be dated about July 1990 and was broadcast on an Irish TV show called PuirÃnÃthat Autumn. As soon as I have it digitised I’ll let you know.”

The Cranberries’ classic 1994 performance on the Jools Holland show on the BBC will re-air next weekend on German network ZDF: Theaterkanal. The band performed “Dreaming My Dreams,” while Dolores performed “No Need to Argue” with Holland on organ and a string quartet. The show that features The Cranberries, Crowded House, the Auteurs, and Aswad will air February 3rd at 23:00 local time on ZDF: Theaterkanal (schedule). 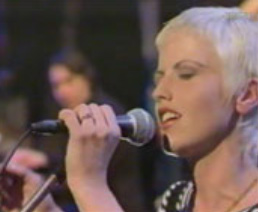 Thanks to dominestar for the tip. Screen capture taken from Cranberries Shows.

“Zombie” on last night’s episode of “The Office”

The Cranberries’ “Zombie” was used on last night’s episode of “The Office.” Andy Bernard, a character in the series, is evidently a fan of the song. If any watched the show, tell us about it in the ZG Forums.

January 11, 2007  |  Comments Off on “Zombie” quartet arrangement in “Teen Strings”  |  by Zombieguide Archives  |  The Cranberries

The January/February 2007 issue of Teen Strings magazine carries sheet music for a string quartet arrangement of The Cranberries’ “Zombie.” This version was arranged by John Reed, and it appears to be the same arrangement that Strings Magazine published in their February 2006 issue. You can view a sample PDF here. (LINK NO LONGER AVAILABLE)

Notorious radio shock jock Howard Stern played the live MTV Unplugged version of The Cranberries’ “Zombie” on his Sirius satellite radio show on Monday. He played the same live version last May on his show. Stern sang along with most of the song until co-host Robin Quivers told him to shut up because she was having a “good time” listening to the song without him. Artie Lange added that it was a “good tune.”

The repeat of the MTV Unplugged performance is no surprise since Stern has repeatedly professed his, er, certain fondness for Dolores O’Riordan’s short- cropped hair.

Thanks to ZG’s venerable founder John for the news.