You are here: Cran World » Archives for April 2014 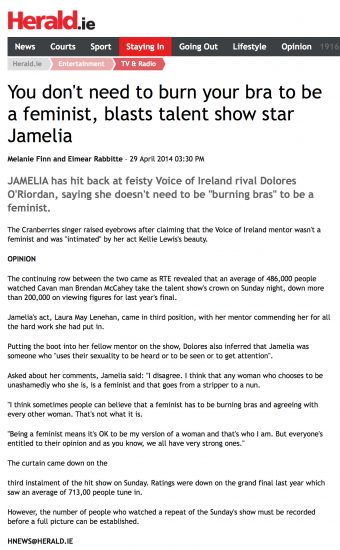 A new interview entitled “Dolores O’Riordan: I’ve no regrets about The Voice, but I NEED a break” was published today on Sundayworld.com showing that Dolores did overall enjoy her experience on the TV show but is quite happy that it is now reaching an end

She reveals that it was all about doing something different to have a good laugh – which got her closer to Kian Egan with whom she should stay in touch – but in no way to make money nor to promote herself to a new, younger, audience.

She told the Sundayworlds that Kian Egan “is just as bonkers as me and we have the craic. I don’t have the same relationship with Jamelia and Bressie. They would be more stiff than us […] I think I will stay in touch with him but probably not with the other two.“

The journalist then explains that Dolores has actually been spending most of the money she received from the production company to commute back and forth between Dublin and her home in rural Ontario. A weekly schedule which she admits was exhausting, hence the fact she was in a hurry “to fly home after the final and not have to worry about saying goodbye to my family within a day or two“.

This article also comes as a confirmation that Dolores was not willing to perform at any time on the set of The Voice: “And, no, I will not be performing at the final. I just don’t want to. I’m not there to sing. I’m there to coach“.

She even confesses that she did not like the idea of having her contestants singing some her songs too much: “One of the girls at one point wanted to sing one of The Cranberries songs but it didn’t work so we dropped it. I don’t really care if they want to do it. But if they are doing to do it, they’ll do it right” she said, laughing.

Dolores O’ Riordan to collaborate with The Smiths’ Andy Rourke

April 27, 2014  |  Comments Off on Dolores O’ Riordan to collaborate with The Smiths’ Andy Rourke  |  by Luc  |  Dolores O'Riordan, The Cranberries

In an interview on RTÉ 2fm on April 18th, Dolores O’ Riordan told Nicky Byrne that she is to collaborate with Andy Rourke (The Smiths, Morrissey).

“I have written a bunch of new stuff“, told Dolores.

She also told Byrne that she’ll go to Los Angeles to meet some casting agents as she is interested to get some cameos or small roles there. For O’Riordan, her experience on The Voice was to see if she liked doing some TV. And she did.

Dolores also indicated there is no plan for a Cranberries reunion right now. “You know I just did a reunion tour a couple years ago, and then I did another album, Roses. It just started to be predictable again. It’s nice to move on, different shores, different expriences…“

Dolores and ex-Westlife member Byrne also remembered about their duet in 2001 at the Vatican Christmas Concert with “Little Drummer Boy”.

You can listen to the interview on our interview section on CW.
Dolores interview starts around 1:36:00 (podcast no longer available)

Seems like Dolores doesn’t choose any journalist to speak about her old demons: Barry Egan just published a new exclusive interview this morning in the “Sunday Independent” (in print and online) entitled “You get to the point where you want to die just to get peace” in which the Limerick woman and her mother Eileen discuss about the music business pressure the singer had to handle in her career back in the 90s.

It’s one of the first interview of this kind, with Eileen explaining how worried she was for a daughter back then: “I was very worried about her. She was unable to tell me or explain or communicate very well” adding that she once told a prominent music business executive “if anything happens to her, I will kill you.“

Dolores then explains: “You get to the point where you want to die [… ] because you think that you’ll get peace when you’re dead and you can’t get any worse than you are”, thus shedding a light on the troubles she went through during the “To The Faithful Departed” era.

Once she concludes “I realise now that life isn’t about money, fame. Actually, all that crap. It’s simply love that’s important“, Dolores then talks about her experience on The Voice of Ireland, again mentioning how Jamelia and her are just the opposite, Jamelia using “sexuality to be heard or to be seen or to get attention” whereas, as a feminist, Dolores feels like they should go against “misogynistic elements” that exist “in the pop industry internationally as well as sexual inequality in Ireland“. 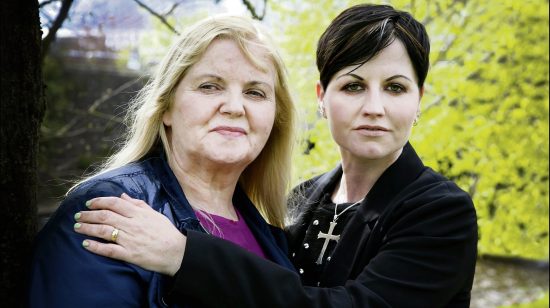 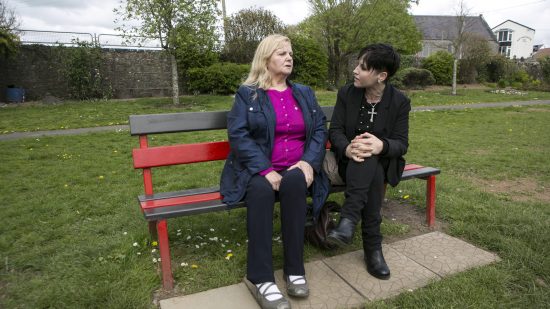 About “The Final” on TV tonight, Dolores says that she will be surprised if her candidate, Kellie Lewis, doesn’t win. She describes her as “as a kind of a suffragette kind of a woman. She is a feminist. She doesn’t have her boobs hanging out. I love her for that. She has self-esteem and respect. That is good for women.“

So good luck to Kellie for this final step!

Last but not least, as a web extra The Independent published a 7+ min. video of the interview. How great!

Last weekend some members of the CW team went to “The Voice of Ireland” semi final.
It was quite an interesting show even if Dolores didn’t perform with her team as all other coaches did on the previous shows. Of course, Kellie being the only one left in the team, it would have been reduced to duet instead of a team performance, but we were secretly hoping that the 2 girls would perform “Zombie” together, which could have been quite enjoyable… well, it didn’t happen and it seems it won’t be happening either next Sunday as some unofficial sources mentioned Dolores should not be performing AT ALL on the show.

As a member of the audience, we can tell that the show was very pleasant to watch, Dolores appeared to be in a great mood and had a killer new look including great new haircut: she shaved her hair on the sides and had red highlights pretty much everywhere. She also had new rings in her ears, which made her look very rock and roll like in 1993. Great great great!!!
She arrived quite late at the Helix as she was suffering of pleurisy (as you probably noticed on TV) but it didn’t affect her good spirit as she seemed quite happy to be here and stole the show like she usually does. Who didn’t like her “I do what I want” pose during a big part of the show? She even clowned around off-camera during commercial breaks and talked to many members of the audience. 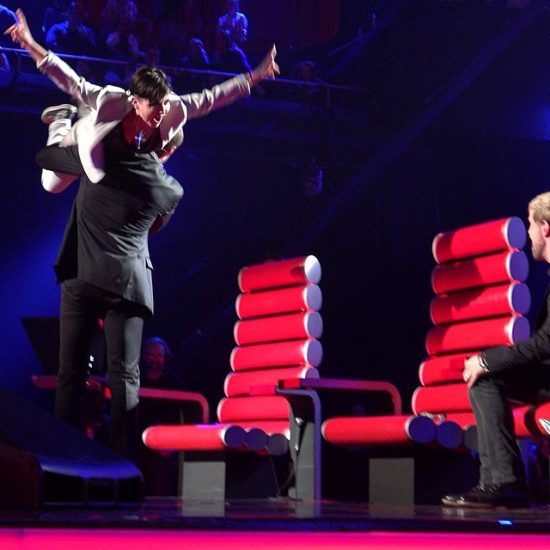 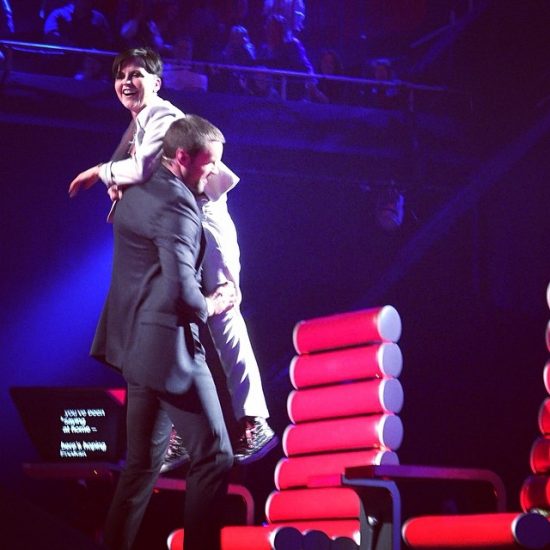 Dolores and Bressie clowning around during commercials

Dolores actively supported Kellie all along the show and was the only coach who got up to hug her candidate and wish her good luck before her performance. She also wore a crown of flowers at some point to show her some support, which apparently worked well.
Good karma!

Similarly to the previous season of “The Voice of Ireland”, the last 4 candidates should be meeting their coach in their hometown the week before the final. It seems that this special film report already took place last Monday with Kellie’s family and friends and it should be broadcast during the show next Sunday. It had to be done just before Dolores leaves Ireland to go to New York City where she should be playing a concert tonight with Zucchero.

Last but not least, good luck to Kellie.
The final round shouldn’t be easy. Indeed, it seemed quite clear at The Helix that the fight would be tough against Brendan… unless the under the radar girl Laura May or even the very outsider rocker Jamie steal the crown! 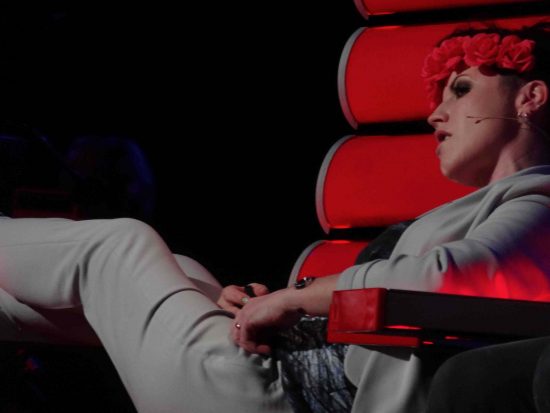 A crown made of roses to support Kellie 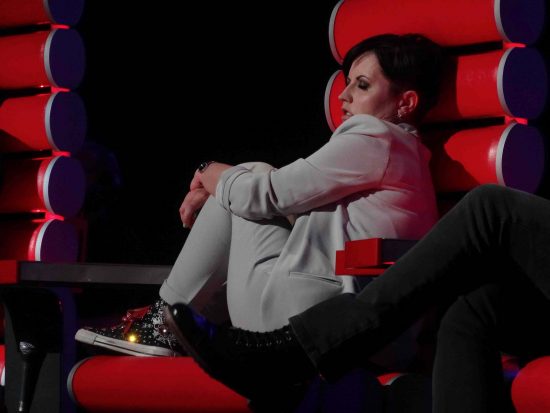 Dolores is suffering of pleurisy and was a bit tired