You are here: Cran World » Archives for November 1999

According to Mercury Records (the division of Universal in Germany), the upcoming Paris concert, the last concert in the area, will be broadcasted over the Internet by the official page. Not only that, but the concert will be recorded and released on VHS and DVD early next year! This is great news to hear that the old Live video (now out of print) will finally get a new addition.

Ok, so it isn’t from “Bury the Hatchet”, but there’s a new single coming out from the Berries! According to Mercury Records, the “Ave Maria” duet with Dolores and Pavoratti will officially be made a single. In case you haven’t heard of it, Dolores did a benefit concert back in 1995 with called “Pavoratti and Friends for the Children of Bosnia”. The concert was recorded and released on VHS and CD under that title. Also, if you attended any Cranberries concerts this year, and heard a Cranberries song playing at the end, this was that song. I don’t have tracks or dates right now, but when I more info, I’ll let you know!

Sometimes you have to laugh at a bootleg because they don’t get the songs right. But this is beyond pathetic… 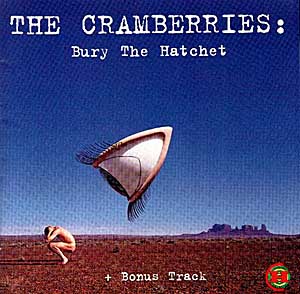 Need I say more? And once you’re done laughing, you can look at the back of this “import”. 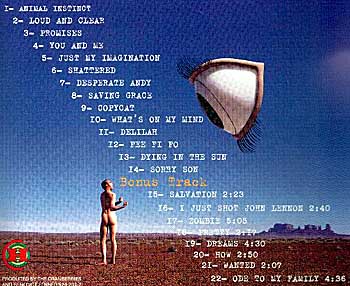 According to a few sources around newsgroups and mailing lists, the worldwide release of “Just My Imagination” may be postponed until NEXT YEAR. I haven’t heard any official news on this, but Europe has been the only area to see this single thus far, which is unusual. However, I have also heard that the UK release got cancelled, although I’ve seen copies of it floating around on eBay. The release may just be limited, and not cancelled. However North America, Asia, and the rest of the world haven’t seen it yet. (Can you say “import”?)

According to various online import stores, a sequel to the EEIDISWCW and NNTA 2-pack has been released in Europe. The set has been dubbed “Double Must” and includes TTFD and BTH. It seems odd to me that they would package these two albums together, as according to the band, BTH is the start of a new “trio” of albums.

November 8, 1999  |  Comments Off on Gold CD Contest Winner  |  by Zombieguide Archives  |  The Cranberries

The band has now officially chosen the winner of the Gold Disc of BTH. From the official page:

…and the winner of the competition for the Gold Disc is….Yvette Johns Putra, from Selangor in Malaysia. We sent Yvette an email yesterday, and her response was ” I want to say thank you so much to The Cranberries, the best band in the world. I am overjoyed at being the winner of the contest. I hadn’t expected this at all!”

November 8, 1999  |  Comments Off on COMPETITION WINNER  |  by Zombieguide Archives  |  The Cranberries

The competition for the signed Gold Disc ended a long time ago, and only now have we sifted through the entries, picked out the right answers, and drawn a winner. If you remember, the question was “What does Mike like with his Turkey?”. Well, the answer to that was “Cranberry Saw Us”, which is a little play on words as well as being the original name of the band. This answer was the only correct one to go into the hat and be drawn by myself (Fergal). We printed off each correct answer, crumpled the paper into a ball, and just drew one piece of crumpled paper out of a hat at random. The winner will be informed today, and until we get a response via email, we won’t announce the winner on this website. Fair is fair. So, check your email folks! Bye for now,

I have the tracklisting for the UK versions of “Just My Imagination”. It is:

November 5, 1999  |  Comments Off on New Album Recording  |  by Zombieguide Archives  |  The Cranberries

A few days ago, Dolores went on a French radio station to answer different questions by the fans. Most of the questions were minor, but there was one that was certainly newsworthy. In response to a question about the next album, Dolores said that the band was going into the studio in January of next year to record the next album! (Hey, that’s only two months away, people!)

News from the official page:

It’s the 4th of November and I’m at home on a day off. Dolores and myself have been flying home to Ireland because she isn’t bringing her son Taylor with her on the road for this tour, and I want to spent time with my wife because she is pregnant. Noel is flying over and back to London as he and his wife are having their baby there. Poor old Mikey is travelling on the bus because he doesn’t really like flying.

It is a much different way of touring for us but the cool thing is that you get to spend your day off at home. Although I must admit we were talking last night and we all agreed we must stay out on the bus a couple of nights for a good old party!!!!!

Anyway, enough rabbiting on. We played our first gig of the European tour on Monday in Rotterdam. It was a bit of a tough gig to be honest as we have two new sound guys, and everything sounded a bit swirly, but the audience was mega, so we just ignored the sound problems and got stuck in. Last night we played in Lyon and everyone agreed that it was one of the best audiences we’ve had. So if anyone that was there is reading this, thank you and we hope you enjoyed it!

I’ve just spent the last hour reading some of the stuff that different Cranberry fans have been chatting about on the Internet. It’s really cool to read things from your perspective and it gives us ideas of what you do and don’t like. Also I just want to say, DON’T WORRY, we are NOT going to retire after we finish our 6th album. We want to keep the Cranberries going for as long as possible !!!

I just heard the other day that there are talks of some Australian and Asian shows in March 2000. As soon as I get confirmation I’ll let you know.

That’s it for now ,
Talk to you soon.