You are here: Cran World » Archives for December 2003

December 29, 2003  |  Comments Off on eBay Shuts Down 237 Auctions for Cranberries Rarities  |  by Zombieguide Archives  |  The Cranberries

eBay shut down approximately 237 auctions for Cranberries rarities when they suspected that their seller, Danny Kronstrom, may have engaged in shill bidding. We told you last week that Kronstrom, one of the biggest Cranberries collectors in the world, had decided to auction his entire collection. By Saturday night, eBay closed all of his auctions and suspended his account. The goodies up for auction included a French “Hollywood” radio promo, a Brazilian “I’m Still Remembering” radio promo, countless European live bootleg CDs, and some promos that we’ve never even seen before.

In an email to Zombieguide, Danny denies all accusations and claims no wrongdoing. “‘Patheticsenses’ is not me, Alex. I don’t know who has made this rumor, began this story, but I only want to sell my items and quit [my interest] in The Cranberries…”

“I feel so bad.. I want to write my real emotions, but my English is not good.”

Zombieguide estimates that Kronstrom must still pay at least $60 in lost eBay listing fees for the closed auctions.

Thanks to Paul for keeping an eye on this situation for us.

The exclusive “Ritz London Magazine” has finally published their long- promised interview with Dolores O’Riordan in their Winter/Spring 2004 issue. This is the first interview with Dolores published since The Cranberries announced their “temporary hiatus” in September of this year. The article covers 5 pages in “Ritz”, making it the most comprehensive interview that Dolores has done in 2003.

The interview was done this past July with Hot Press editor Stuart Clark. Hotpress.com published excerpts from the same interview over the summer, although none of the quotes from that article are repeated in the “Ritz” printed article.

Hot Press editor Stuart Clark asks Dolores about a number of topics, including singing for Pope John Paul II in 2001 and 2002, touring with the Rolling Stones in 2003, her childhood experiences with the Catholic church, and, most intriguing, The Cranberries’ ”taking time out to pursue solo projects.” 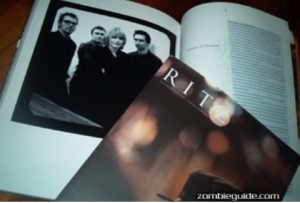 Dolores also talks about living in Toronto, where she has been living for the past several months to record her debut solo album, and she says, where she will continue to live this winter. “Having two rugrats — well, three, including Don [Dolores’s stepson] who’s a big kid – it’s still a magical time of year. We’re going to be in Toronto, which means a lot of running around in the snow and hot whickies afterwards. There are bears in the woods near us, but they’ll be hibernating. God, I can’t wait!” she says in the interview, evoking images of a Canadian Winter Wonderland.

Zombieguide has an extra copy of Ritz available for auction on eBay. We’re also throwing in one of our extra copies of the new book From the Cradle to the Stage by Alan Swan.

This is the last interview that we know Dolores to have given, but honestly and unfortunately, it could be the last one we see for awhile. Cherish it while you can.

In the meantime, Zombieguide will keep you informed of any new Cranberries interviews, sightings, or rumors from “a friend of mine who is a friend of the janitor of the building where a friend of Noel’s cousin works part-time.”

December 21, 2003  |  Comments Off on Major Cranberries Collector eBay-ing His Collection  |  by Zombieguide Archives  |  The Cranberries

Longtime Cranberries collector Danny Kronstrom has made the hard decision of parting with his collection.

Danny and I have a long history together, as we ran The Cranberries Gazettetogether before I was invited by former webmaster John Armijo to join Zombieguide.

When asked why he is selling his collection, Danny told me, “I fear it’s the end of The Cranberries and it’s no longer as important to me. I love it, but not enough to buy everything about them. I have some rare stuff and I think it’s important to share it. Some people have shared rare stuff… it’s my time now!”

Danny will be listing his collection piece by piece on eBay over the coming weeks and months. Click here to view Danny’s eBay items. (LINK NO LONGER AVAILABLE)

Norbert from over at Zombieguide Europe has dug up an interview with Noel, Mike, and Fergal recorded backstage from this summer’s Rolling Stones Fourty Licks World Tour, where The Cranberries opened for several European dates. This marks the first, and probably only, video interview of The Cranberries that we’ve seen online in 2003.

“It’s been amazing,” Noel says about the band’s summer outing with the rock veterans. “I guess every band, when you begin, you dream that someday you’ll have this kind of opportunity. I think it’s been everything we hoped it would be. Everyone’s been really nice. We’ve played to an audience that maybe wouldn’t have known us before. I really couldn’t say a bad thing about any of those things. It’s been a really good experience.”

He goes on, “When we used to be teenagers, we used to go to alternative discos and stuff, and they used to play–”

“‘Sympathy for the Devil,’ was it?” Fergal interrups. “That was the big one.”

“There was a collection that they used to play every Friday night,” Noel continues. “When I was watching the show and listening to some of the songs, it kind of reminded me of when we were growing up and hanging out at places back at home.”

Fergal then recounts a story regarding The Rolling Stones’ frontman: “There was the Curse of Keith,” he begins, exchanging mischievous glances with Noel. “There was a pub in New York, and we were sitting down, a bunch of us for a night out. And there was a big picture of Keith in the background with a light on it. So we ended up having a [drinking] session all night until like 5 or 6 in the morning, or something like that. Then we were in some other pub down in Australia. This was like a couple of weeks later. There was another picture of him in the corner. That ended up being another session ’til like 5 or 6 int he morning. So over a few stages, these pictures appeared and it ended up in a drinking session, because of the Curse of Keith.”

Noel was admittedly impressed by the sheer size of The Rolling Stones’ tour: “It’s amazing to see, when you see the scale of it, the size of the whole setup, you know? I think we thought we had a big setup with a few trucks and a few buses, and then you see this… It’s like a town moving across Europe, it’s amazing to see.”

Click here to download the 2 minute interview. (LINK NO LONGER AVAILABLE)
The video should soon be available in the the ZG Videos Section. 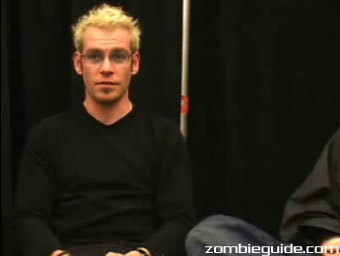 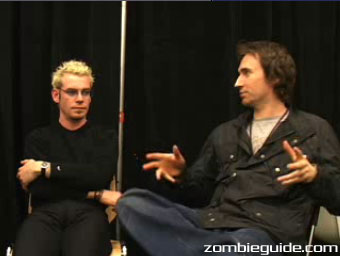 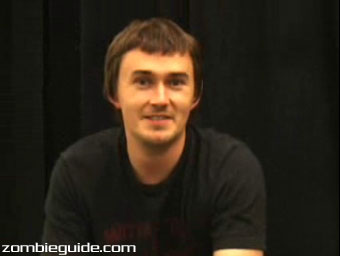 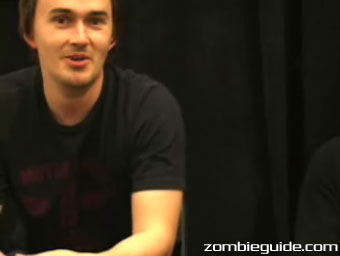 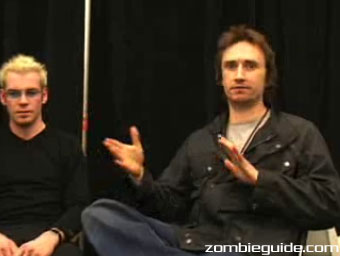 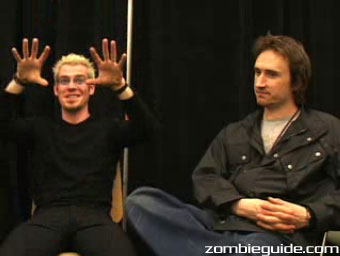 December 14, 2003  |  Comments Off on Special Edition “Stars” to Release in Japan  |  by Zombieguide Archives  |  The Cranberries

Japan is finally getting their hands on the Special Edition 2CD version of “Stars: The Best of 1992-2002,” thanks to Universal Music Japan.

Japan initally only received the 1CD version of the greatest hits album when it was released there in September 2002. The new 2CD version will release on January 28, 2004 at a price of 2427 Yen, the same price as the original 1CD version. Universal Music Japan also gave the “Stars” DVD a low-price re- release last month, though no changes were made except new stickers on the outside.

No word yet on whether the re-release will contain anything new not included in the international 2CD special edition version. Zombieguide will keep an eye on the new release and let you know if there are any new additions.

Patience has always had to be a virtue near and dear to the hearts of Cranberries fans. And now, it appears that it’s time once again to exercise the inspiring (albeit annoying) quality of patience as the January 5th, 2004 release date of Jam & Spoon’s upcoming CD Tripomatic Fairytales 3003 gets postponed.

Now, it seems that fans of The Cranberries will have to wait until the vague day in “early 2004” to pick up the Jam & Spoon album that includes “Mirror Lover,” the track that features guest vocals by Dolores O’Riordan. Because no exact date has yet been given to the delayed release, it’s not clear when Tripomatic Fairytales 3003 will finally hit stores.

As more information becomes available, we’ll bring it to you right here on Zombieguide.com

The advance Promo CD (CD: 2003 DE (Polydor / Island / Universal; 51446259) is in circulation now among key industry professionals, but is not sold in stores. Could it be time to go eBay-ing?

Head over to JamAndSpoon-Fan.de to check out the scans and more info.

December 2, 2003  |  Comments Off on Streaming Performance of “Salvation” on MTV UK  |  by Zombieguide Archives  |  The Cranberries

Even if you have to wait two years before getting a chance to catch The Cranberries live in concert, you don’t have forfeit the thrill of watching The Cranberries live. Thanks to the power of the Internet and a slew of live performances from the past, MTV UK has posted a streaming video performance of “Salvation” live available for download. The only strand of red tape is you’ll need to download RealOne Player and obtain a subscription to RealOne SuperPass…both available now with a limited time free trial period. So logon to MTV UK, power up your pc’s speakers and enjoy.