You are here: Cran World » Archives for October 2019 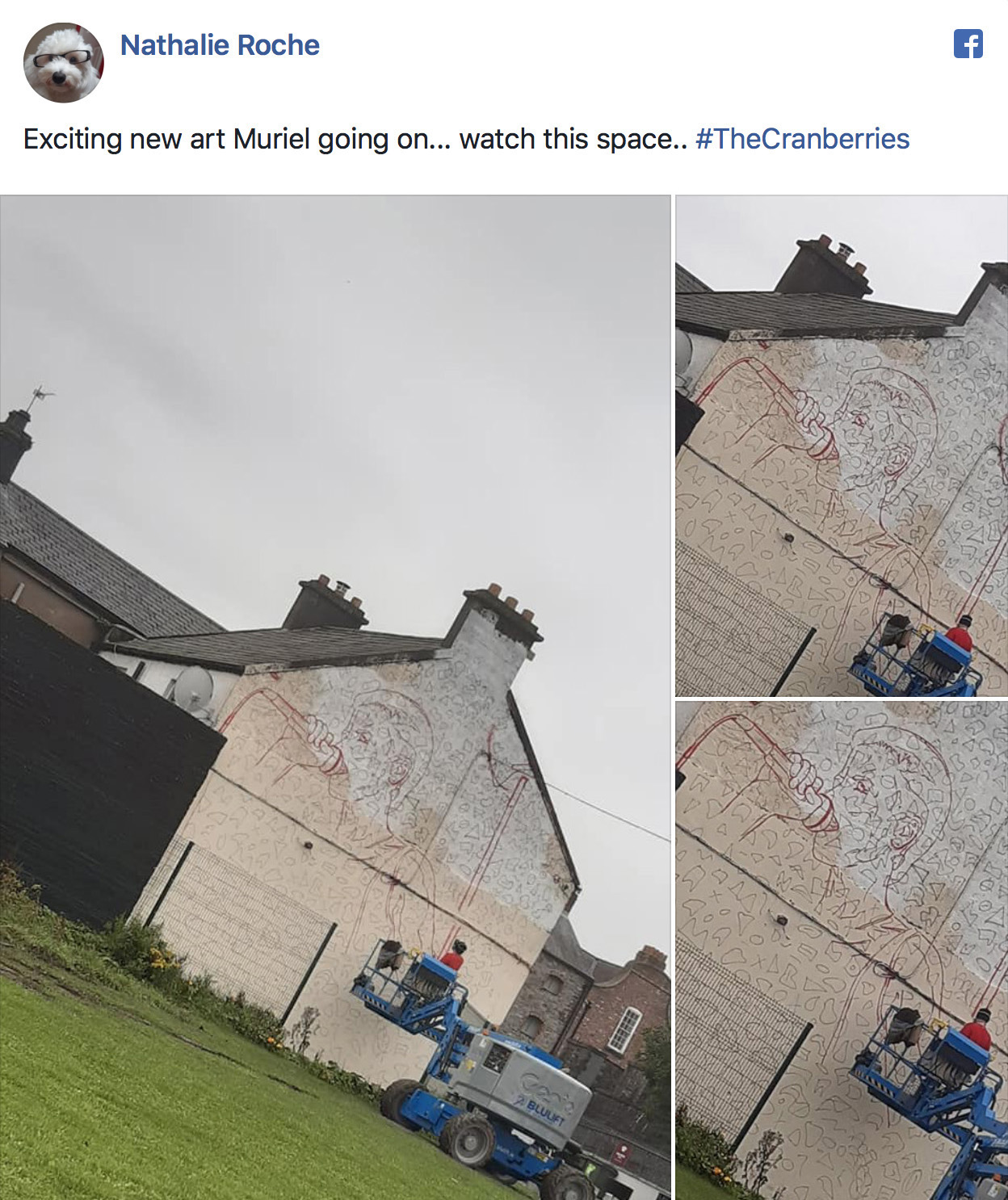 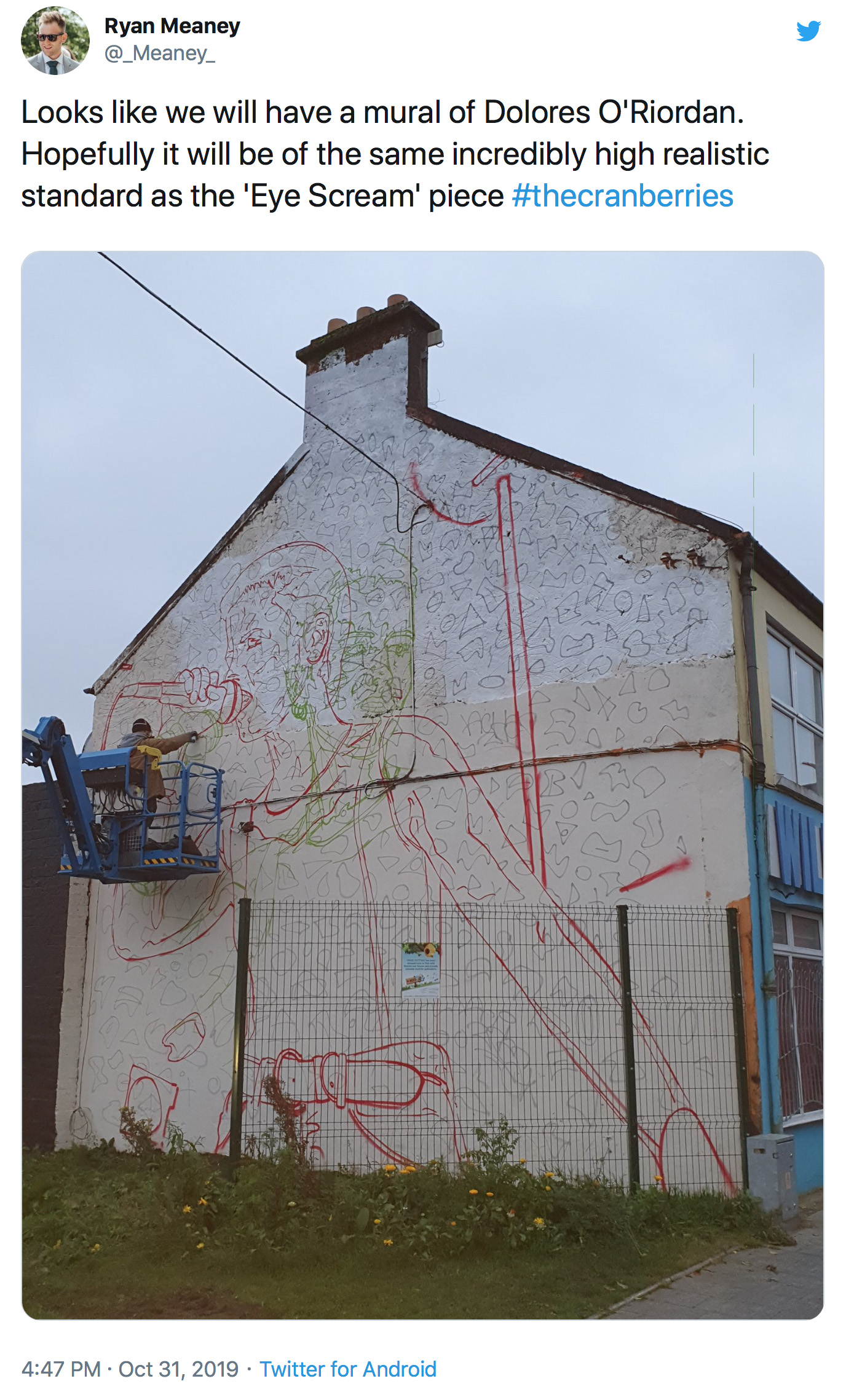 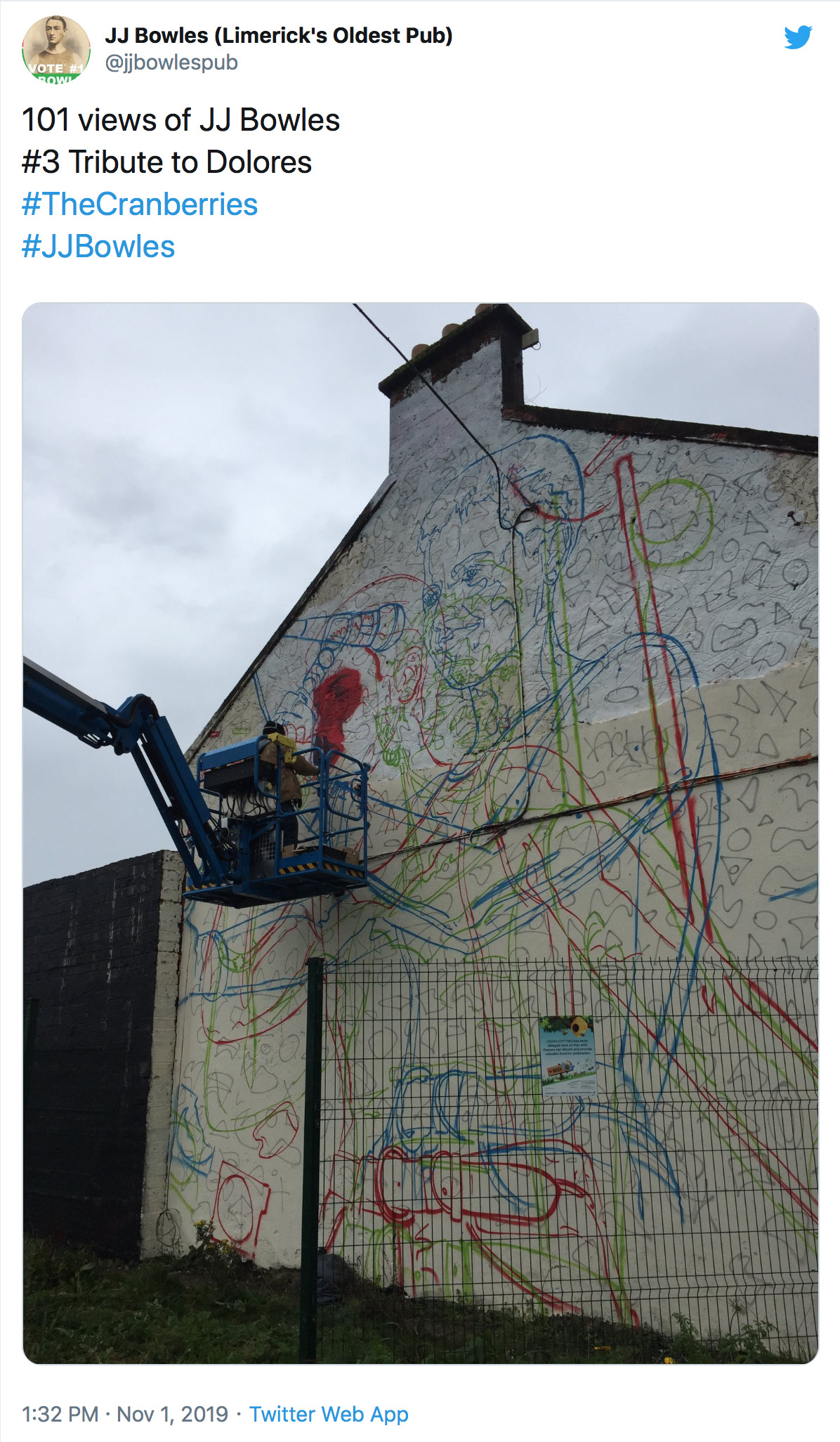 It seems the artist took as a reference 3 photos from The Troubadour in Los Angeles on the 15 July 1993. Have a look at the original pics by photographer Donna Santisi on Getty Images by clicking here, here and here. Thanks to DORSpain for noticing!

It looks like the name of the artist is Aches from Draw Out – Urban Exhibitionists.
Have a look at the video-teaser posted last week on Facebook where you can recognize the exact wall: 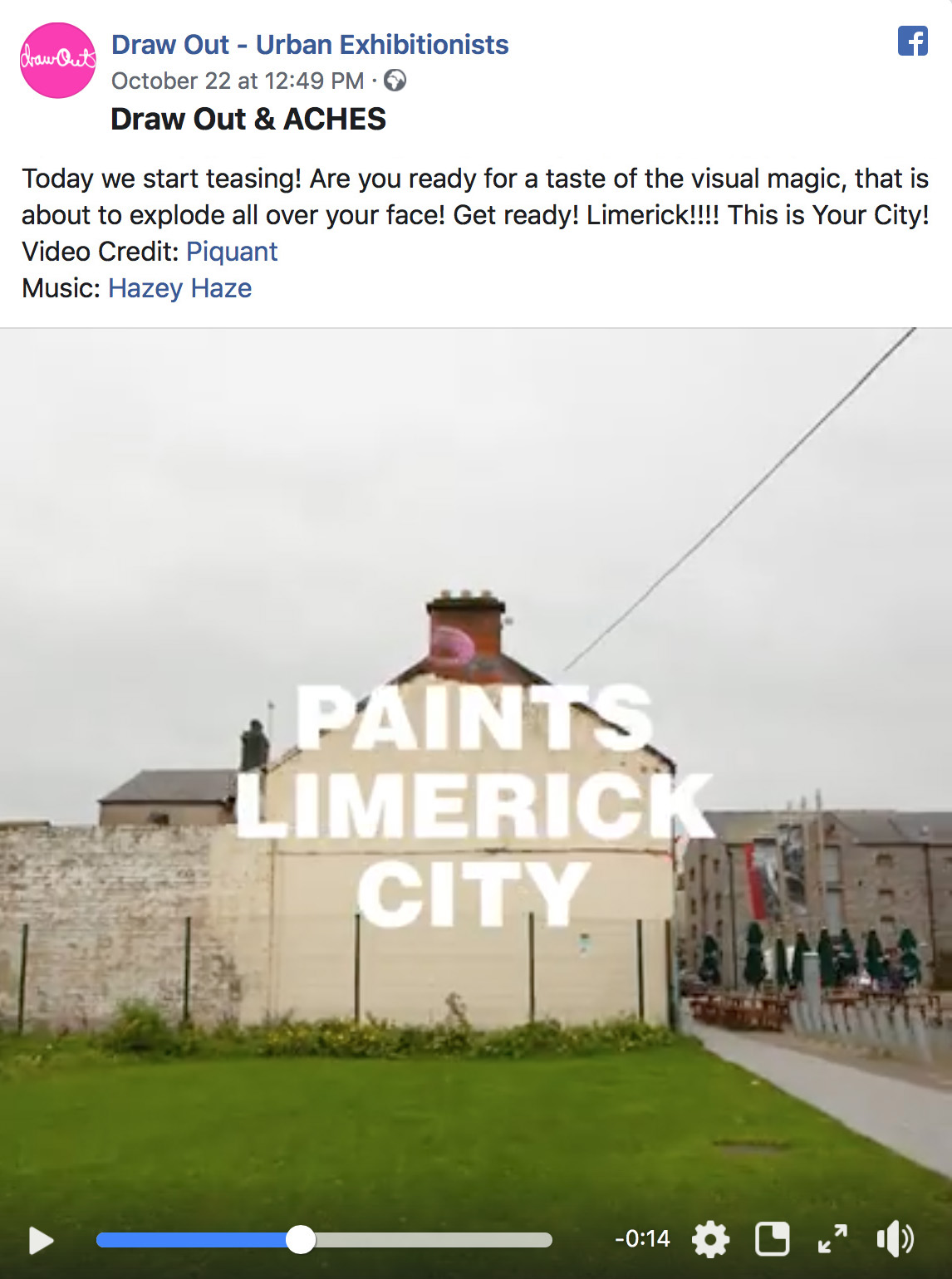 Earlier than expected… once again!
The official “Dreams” music video remastered in HD is now online: 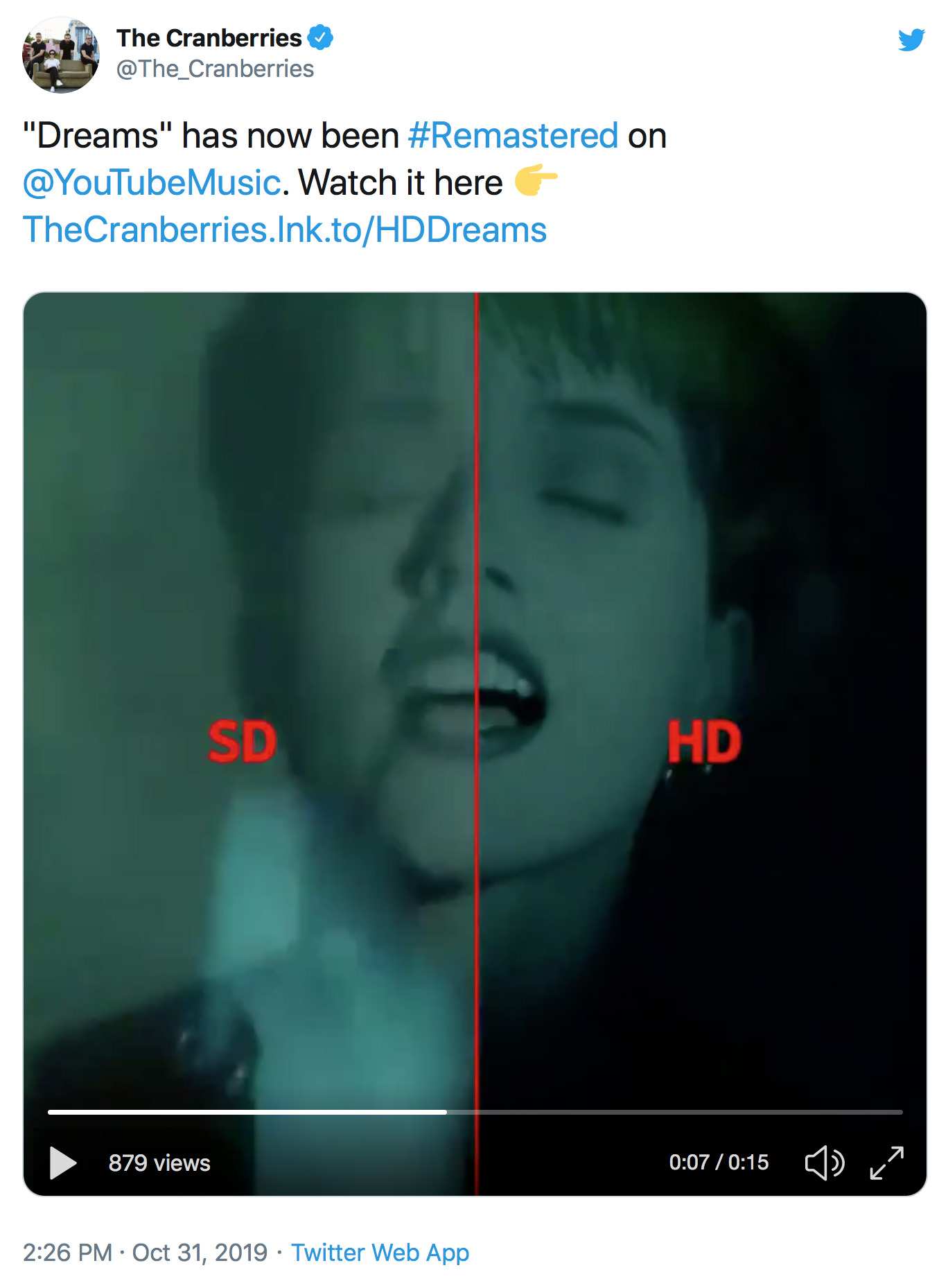 Earlier than expected… once again!
The official “Linger” music video remastered in HD is now online: 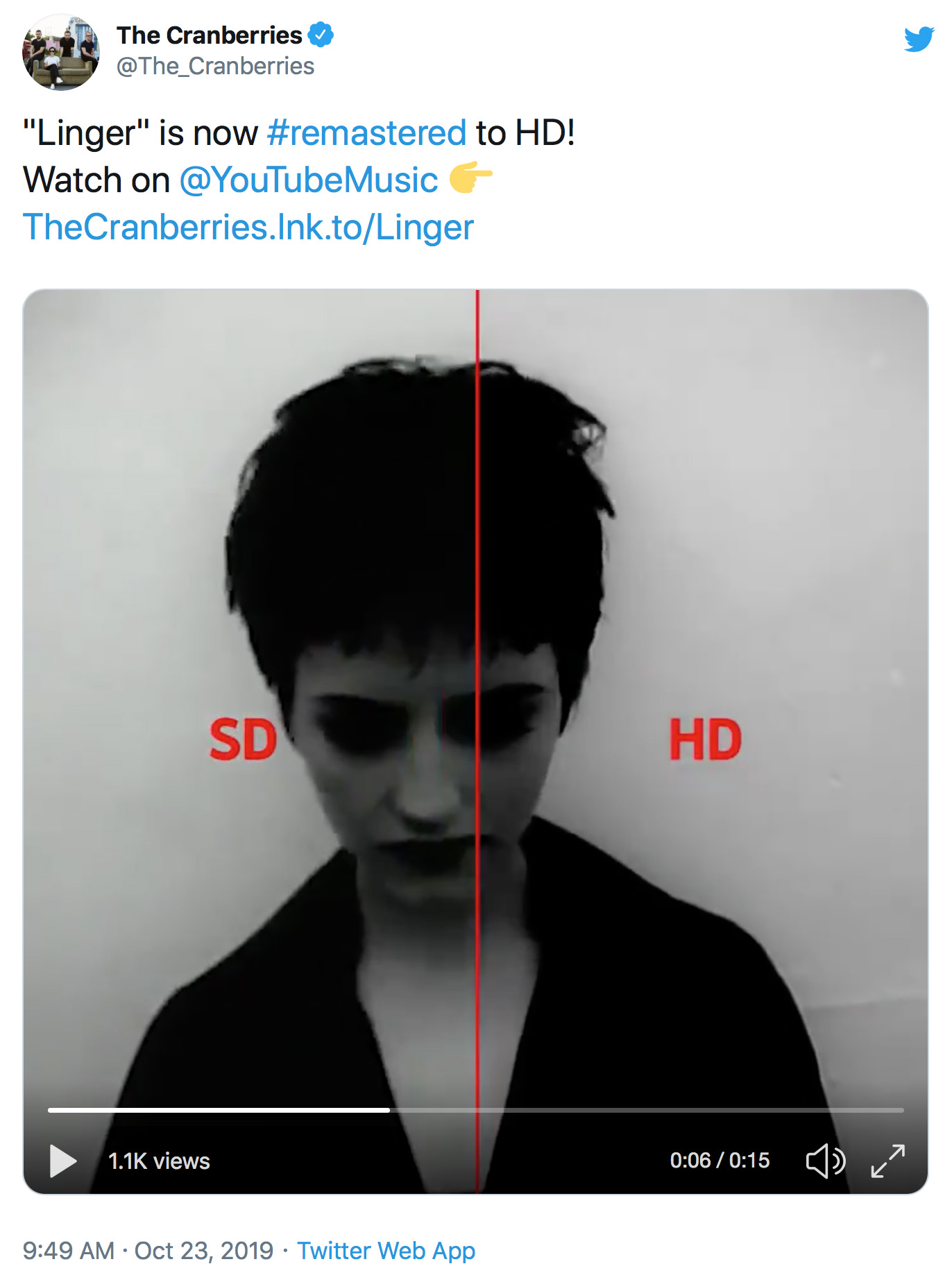 The Chat – with Dan Murphy
Episode 12: Noel Hogan – The Cranberries

Also available on iTunes and Spotify 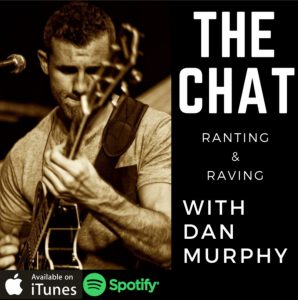 Thanks to The Cranberries Newspaper on Facebook for the find.

On Instagram today, user murphantastic posted a 50sec video where the sound is a glimpse of the interview and the image is a photo of Noel and Dan Murphy during the recording this week (notice the photo on the wall): 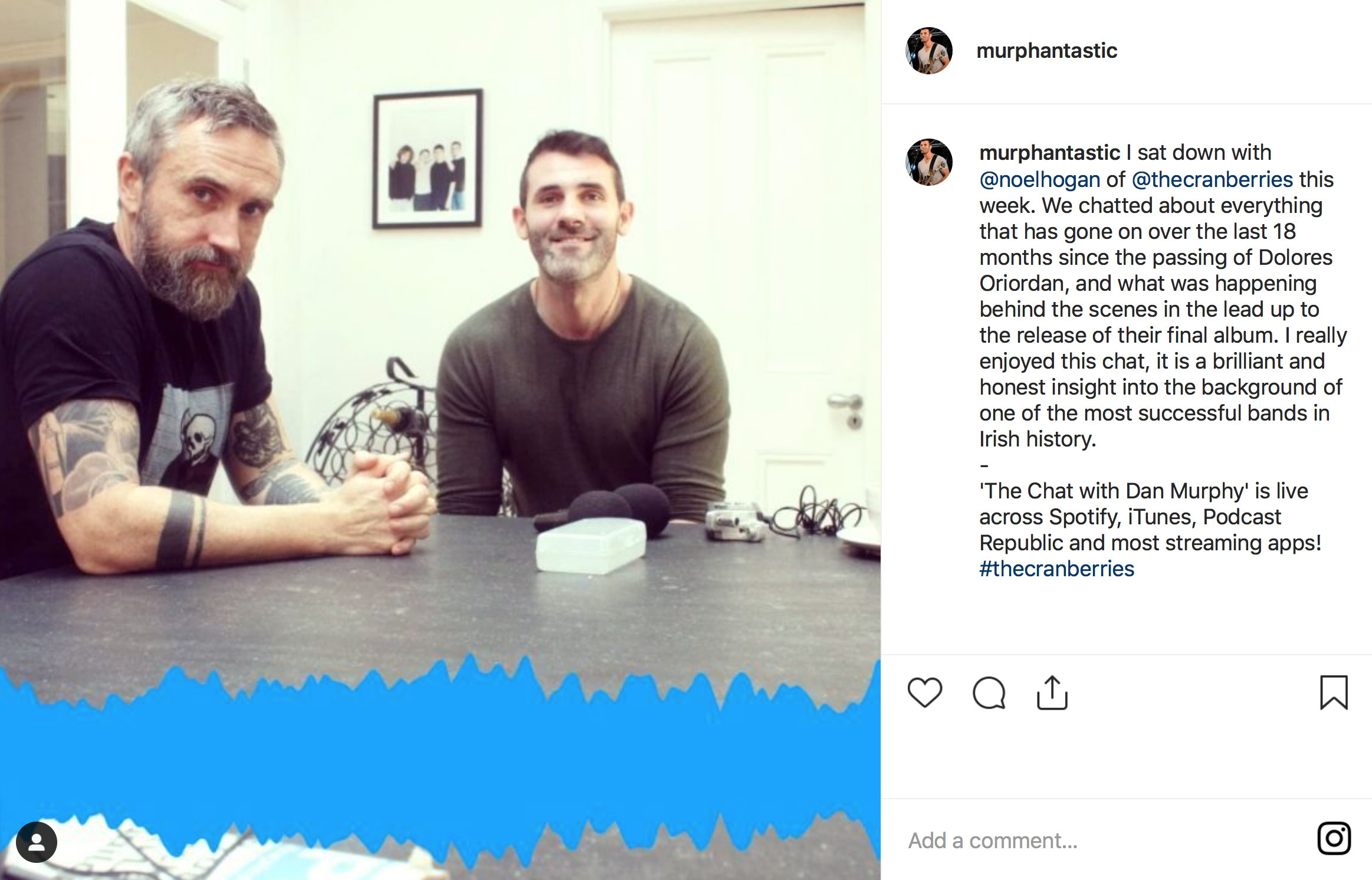 Music videos HD replacement: “I Can’t Be With You”

Earlier than expected…
“I Can’t Be With You” HD treatment, now online: 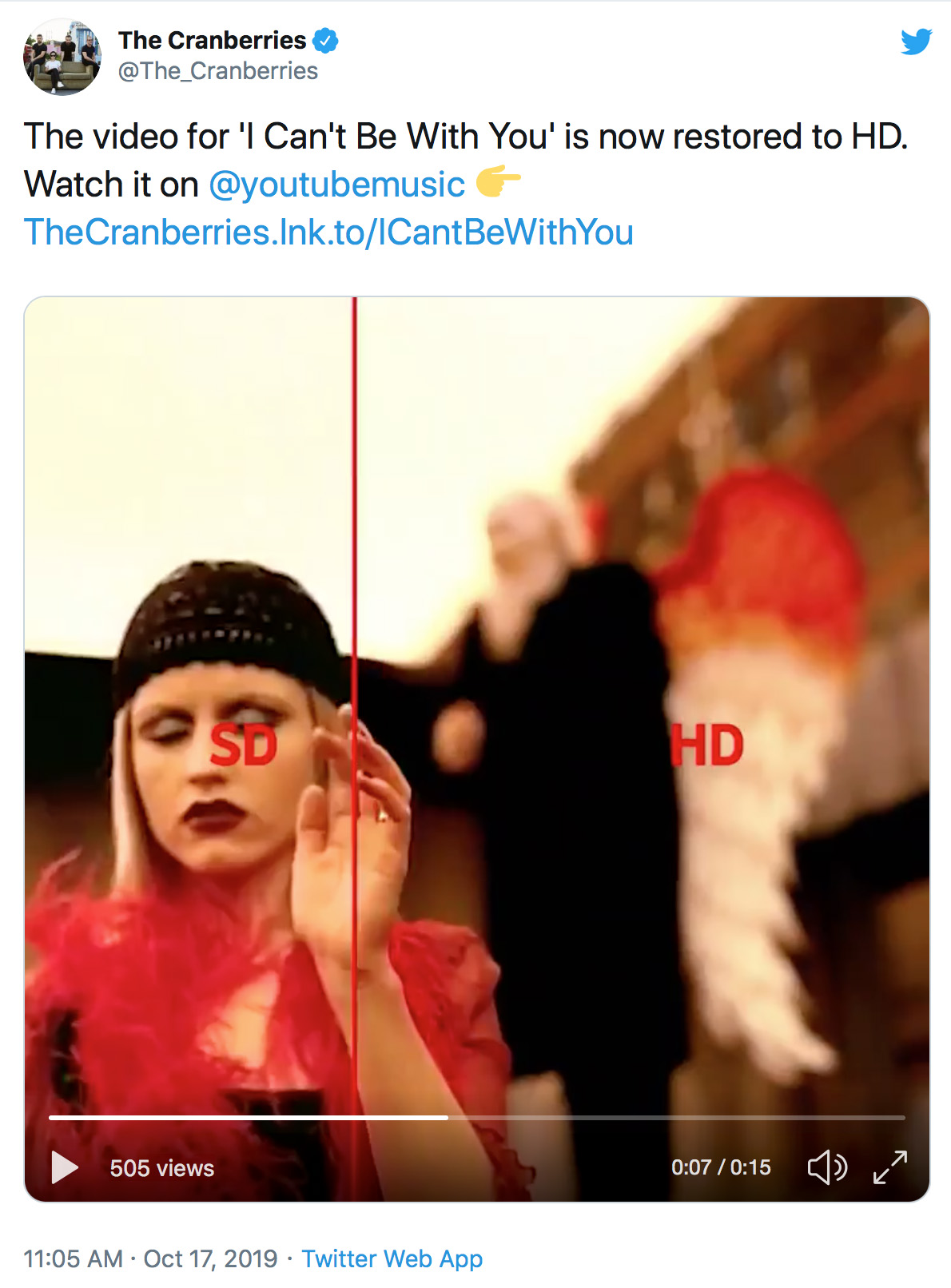 Only on Facebook, they also posted almost the same 15sec video in a different format (mobile phone): 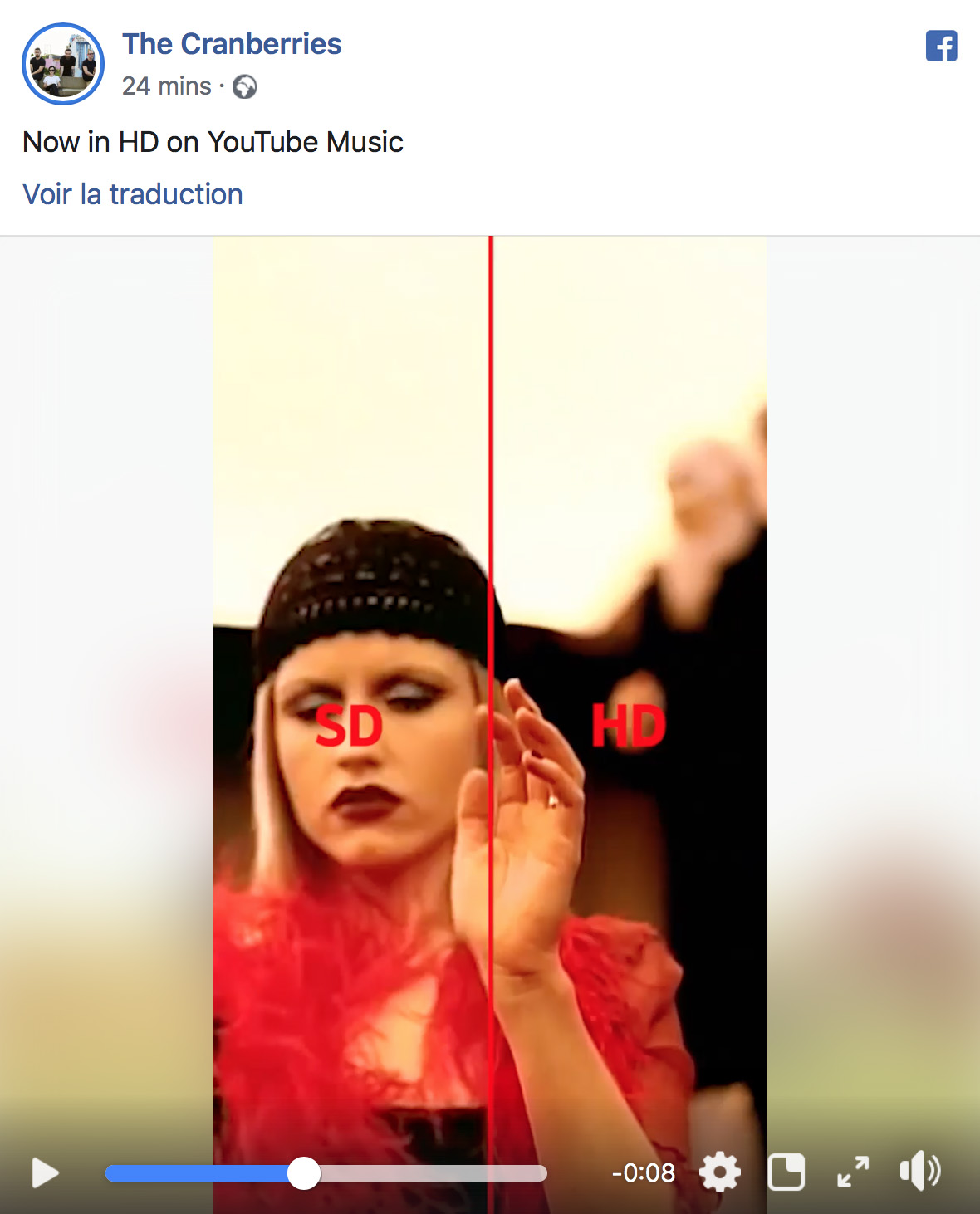 The wait is (almost) over. The cartoonist theHand just announced on the dedicated Facebook Public Group and Instagram that his “CalenDolores 2020” in loving memory of Dolores O’Riordan will be available on www.doloresoriordan.it on 21 October 2019. 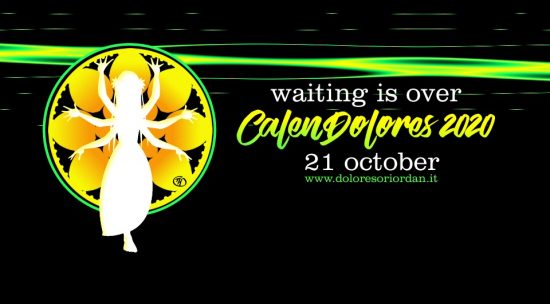 There is no more information for now, like price or expected delivery, but it should appear pretty soon. The countdown has now started… 5 days to go!
Stay tuned.

Due to technical difficulties setting the storefront, the release date has been delayed. Also the website www.doloresoriordan.it moved to www.calendolores.it

Read the article directly on irishtimes.com 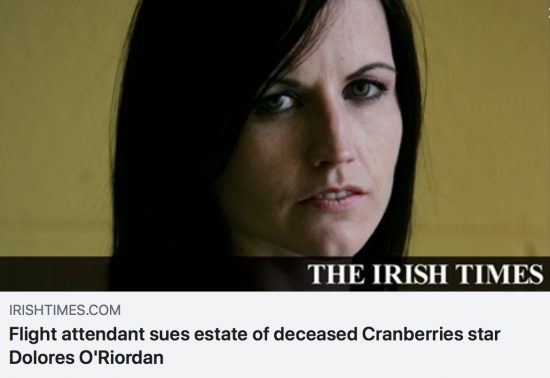 October 10, 2019  |  Comments Off on limerickleader.ie “Family of DOR launch music bursary for Limerick musicians in memory of rock icon”  |  by Axl  |  The Cranberries 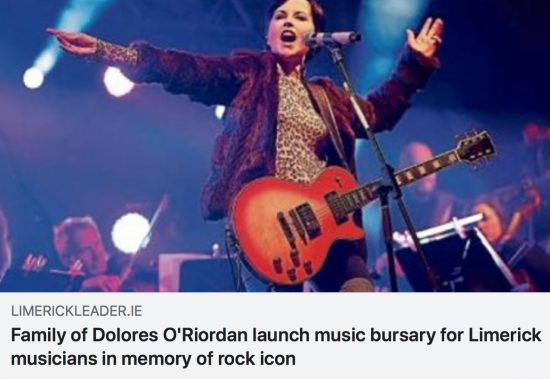 Dolores O’Riordan’s collaboration with Eric Alexandrakis will finally get a release on vinyl as a special Record Store Day Canada’s Black Friday item on November 29.

The LP titled Electromanic will most likely include songs recorded in 2014 and 2015, such as “La Fine/Trust” and “You Got What You Wanted”.

It looks like Record Store Day’s Black Friday won’t feature this item in the UK nor in the US.

This is an error, it is on hold.
Eric Alexandrakis posted an update about it just a few minutes ago on Facebook: 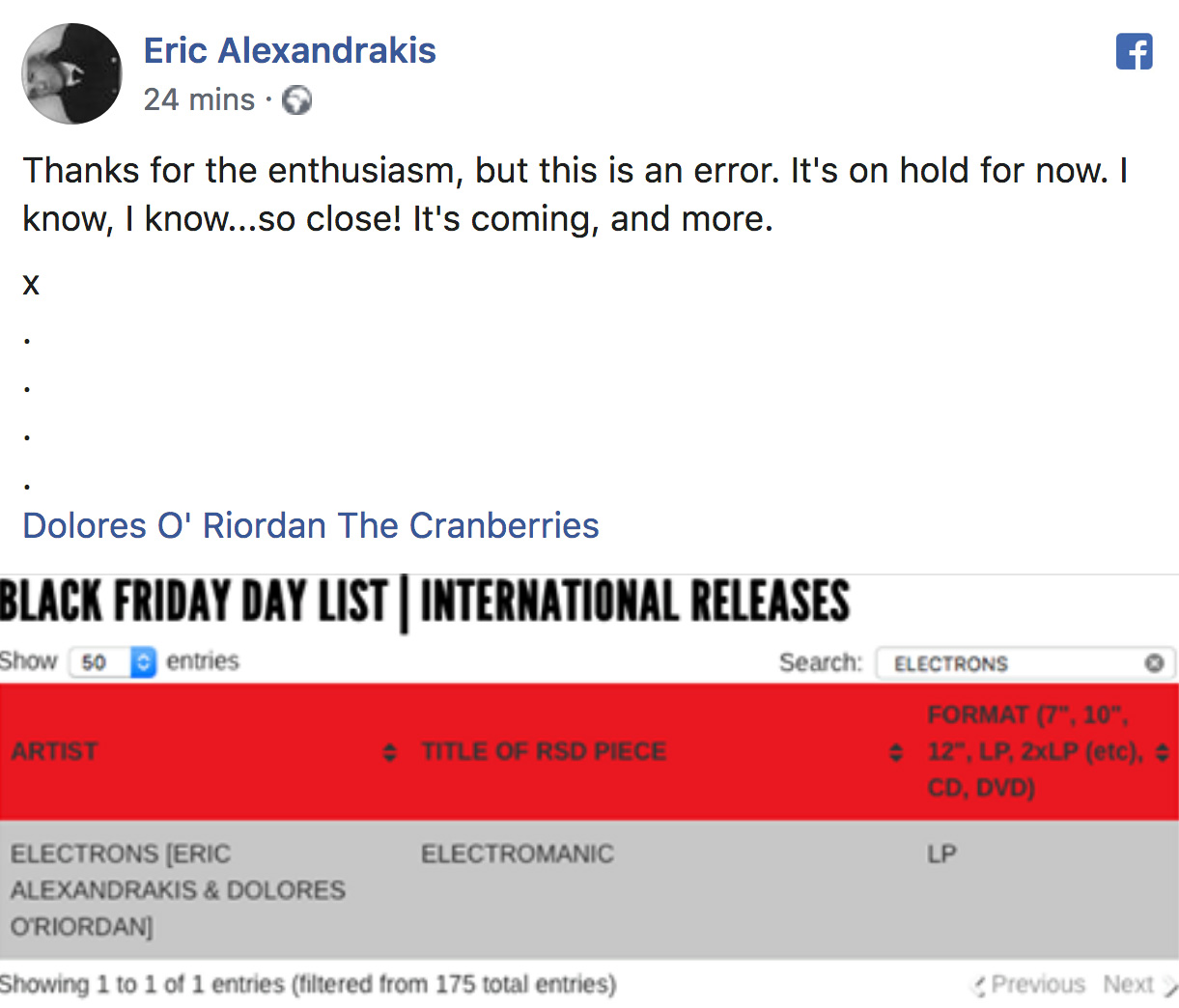 VIDEO: Behind the scenes interview (2002)

44min behind the scenes interview (recorded in 2002) published on YouTube by user The Lost Tapes.
RARE!!

Thanks to The Cranberries Newspaper on Facebook for the find.

EDIT: the video is no longer available to the public.

Over the coming weeks, The Cranberries will be replacing everyone of their music videos on YouTube with HD versions. It starts today with “Ridiculous Thoughts” and the band just posted a 15sec SD/HD video comparison on their socials (Twitter, Facebook, Instagram) to announce it: 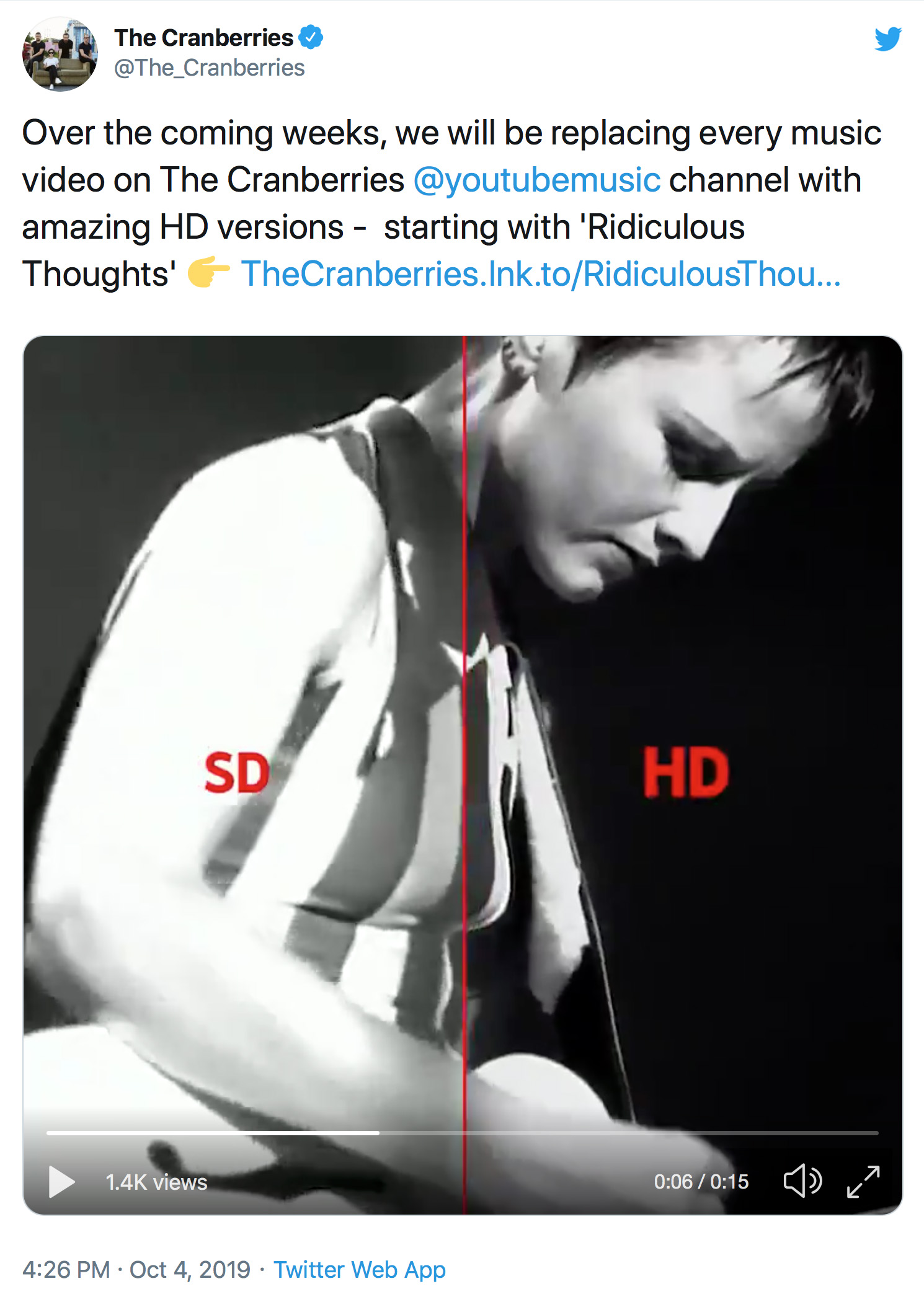 Read the (almost) full chat with Fergal Lawler from yesterday’s video countdown. Only missing a couple of lines of fans chatting together at the very beginning, before Fergal was here.

There was also a bug/freeze in the chat window during the countdown before the launch of the video and a couple of lines might be missing there as well, or more likely appearing in the wrong order. 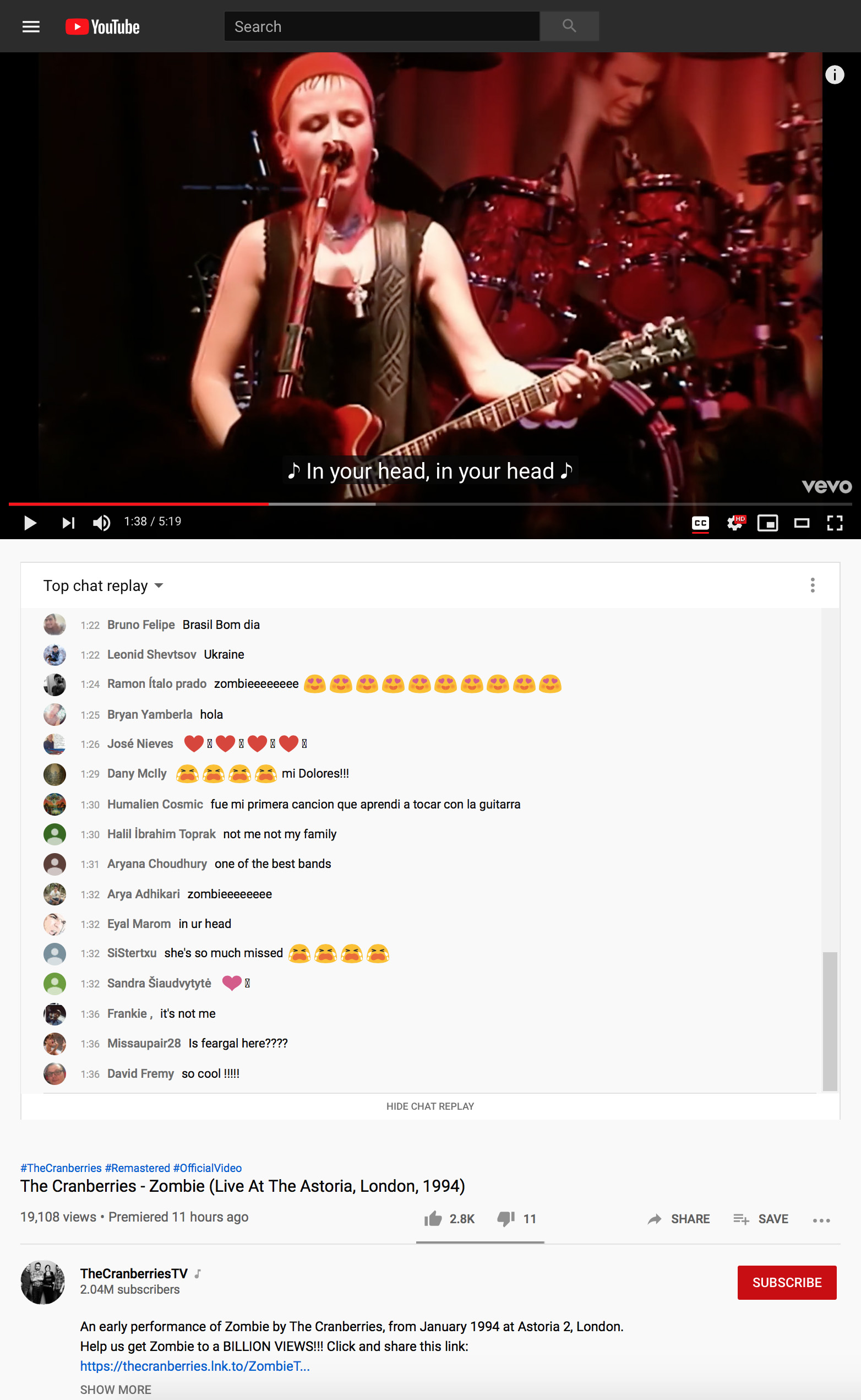 #ZombieToABillion – “Be one of the billion”

Soon after the video premiere of “Zombie” (live at Astoria), The Cranberries posted on their socials (Twitter, Facebook, Instagram) a 28sec video to officially launch the #ZombieToABillion campaign: 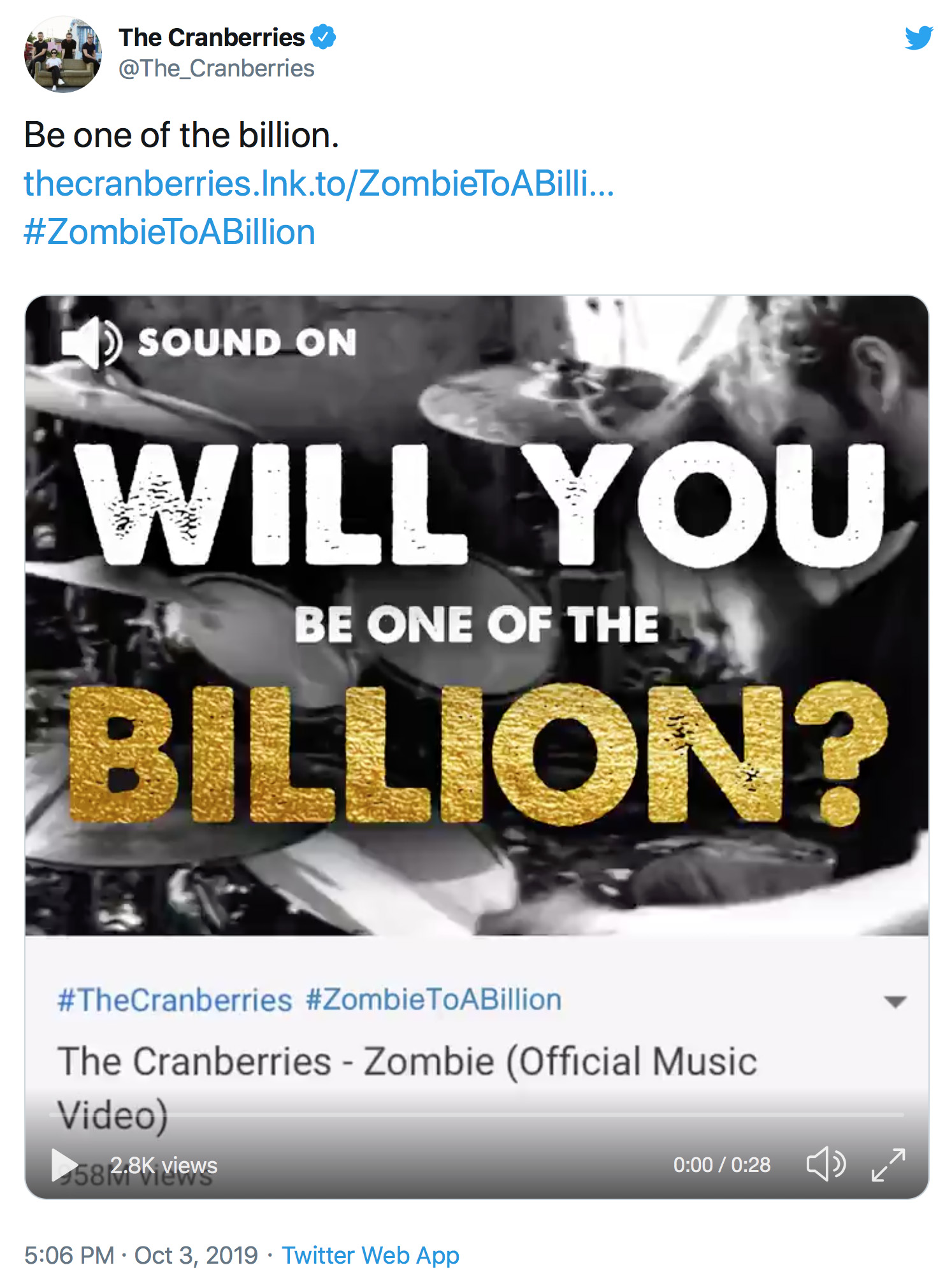 They also updated their Facebook and Twitter accounts with the new banner, “Be one of the billion #ZombieToABillion” 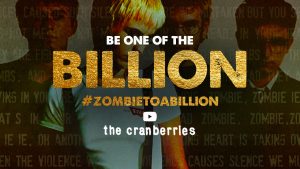 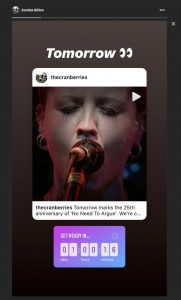 For those who still don’t know what the #ZombieToABillion campaign is all about, just know that once the official “Zombie” music video reaches a billion views, a remastered 4K version will be released on YouTube. Still something like 42 Millions to go!!

It all started earlier today with The Cranberries posting on Twitter and Facebook asking fans to head to YouTube to live chat with Fergal before the Zombie (London Astoria ’94) premiere. A 20sec video was posted with it: 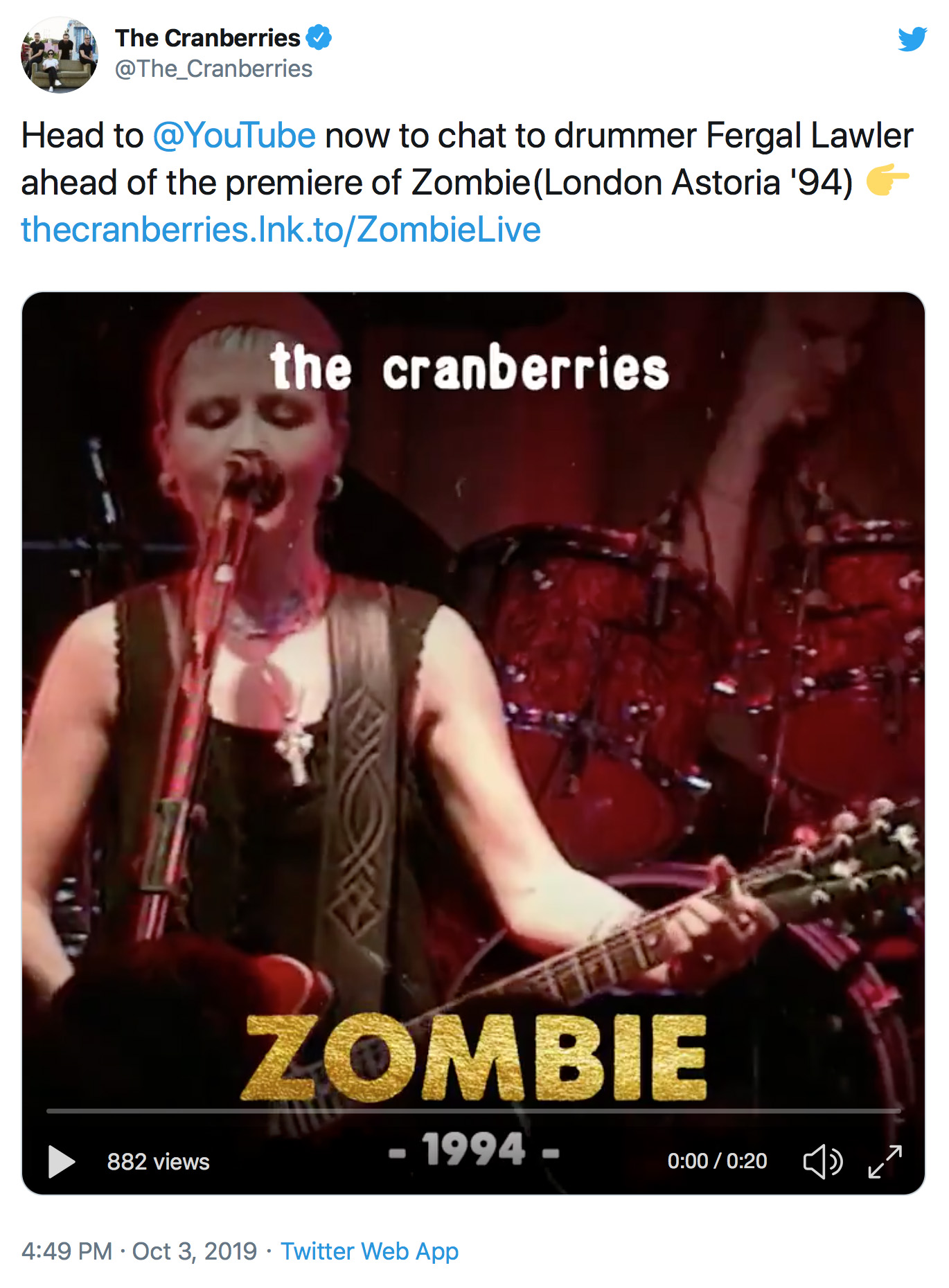 When The Cranberries posted this message, the live chat had already started and Fergal had already introduced himself. Chat started more or less at 4:30pm (BST), 30 minutes before the HD video premiere: 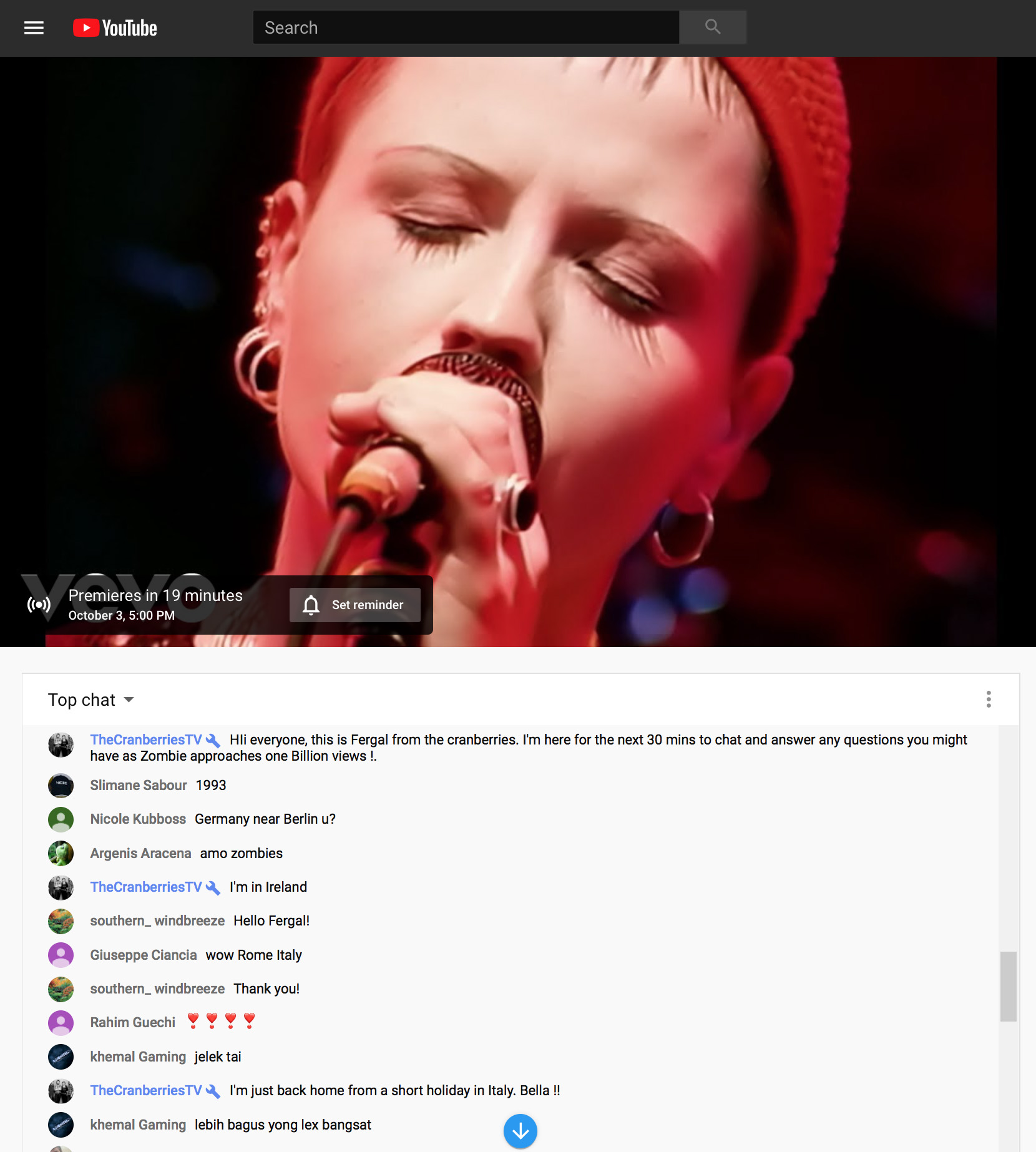 After a few minutes Fergal posted about the boxset, “we are working on a boxed set of NNTA which will be out early next year” 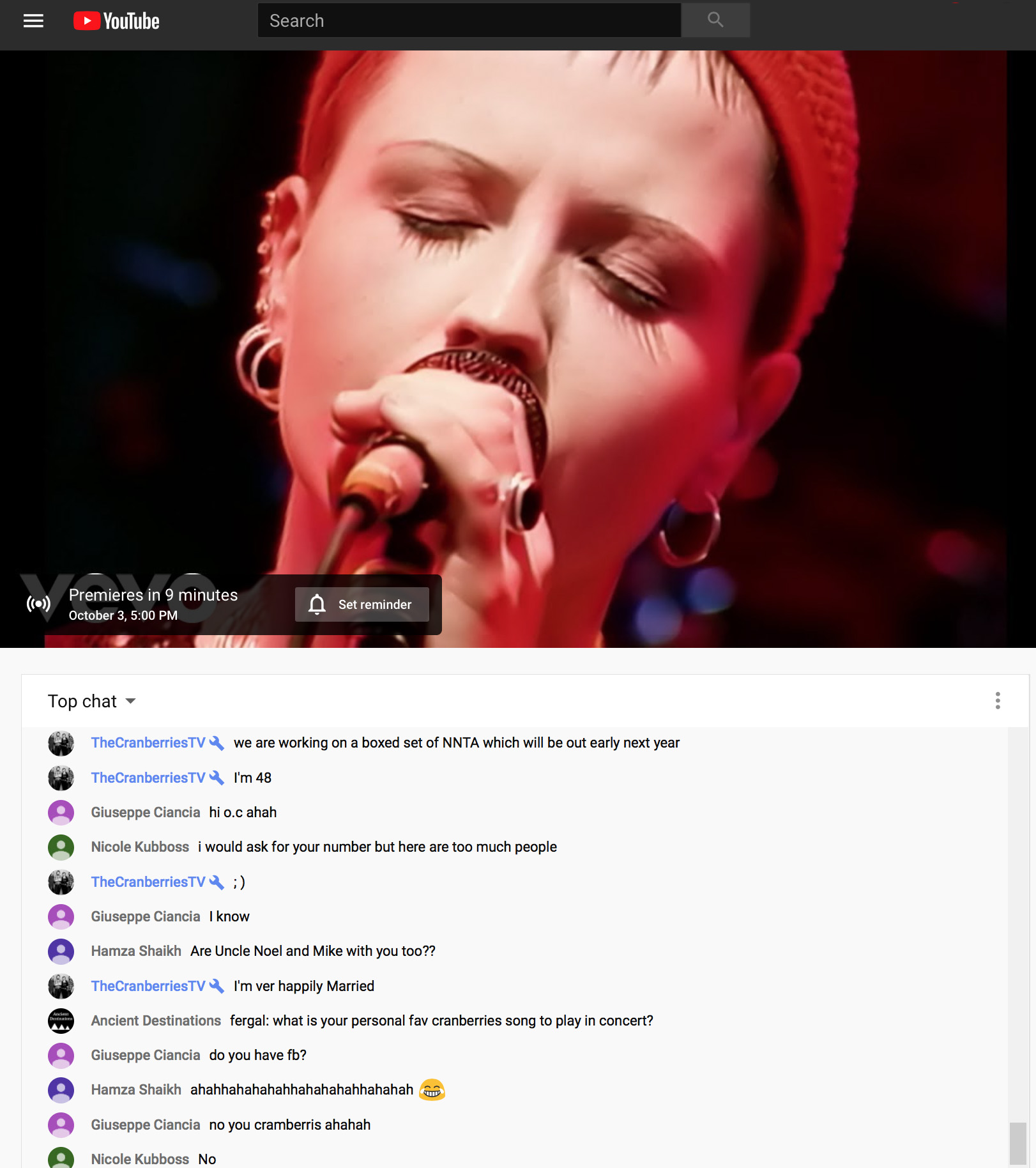 …and if you still haven’t watched the Astoria HD video yet, go to YouTube now, quality is AWESOME!!!

October 3, 2019  |  Comments Off on Engaging countdown with band member participation  |  by Axl  |  The Cranberries

According to the webzine The Music Universe, The Cranberries fans will be able to tune onto the band’s Youtube page for an engaging countdown to the music video’s worldwide debut WITH BAND MEMBER PARTICIPATION at 11am EDT / 4pm BST 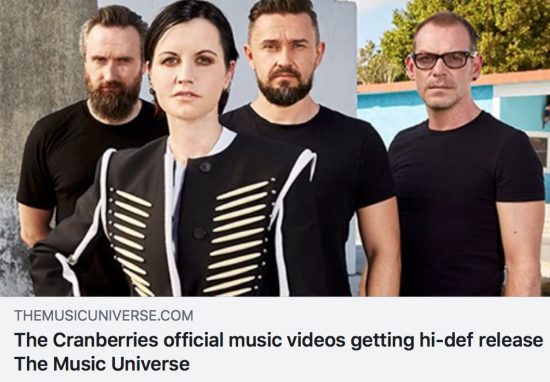 “No Need To Argue” was released 25 years ago today in many countries, and the following day in the rest of the world. Happy 25th Anniversary to The Cranberries most successful album! 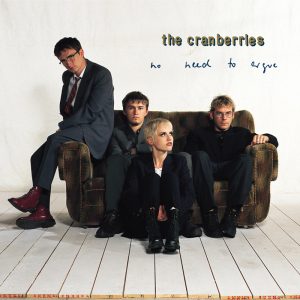 A special 25th Anniversary Edition should be released soon. [Edit: early 2020]
In the mean time, The Cranberries just announced that several of their music videos will be released in HD throughout the upcoming weeks, beginning later today (5pm BST) with the remastered version of “Zombie” recorded live at the London Astoria 2 in 1994 (already available in standard definition on “Live” VHS/DVD). 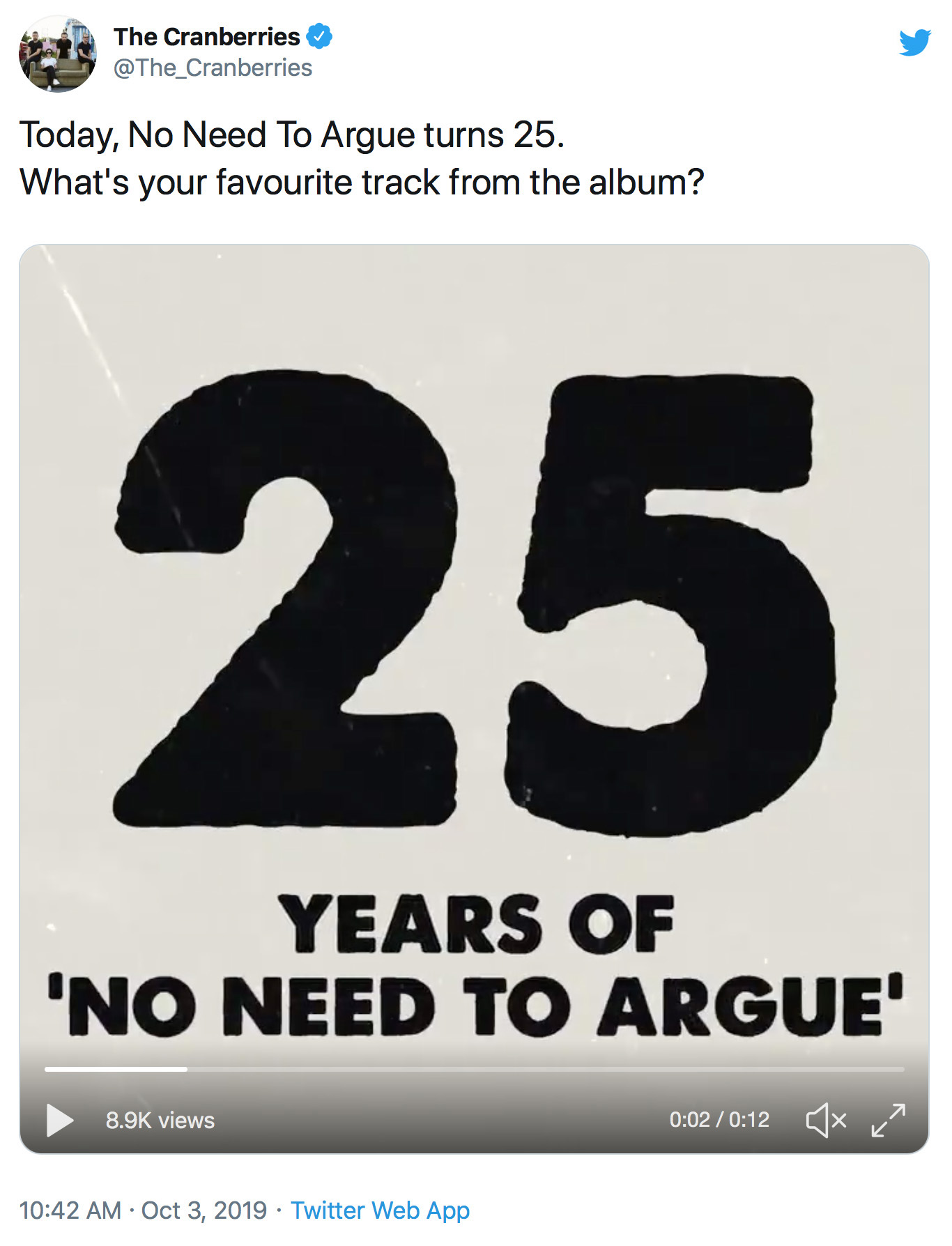 According to The Cranberries YouTube channel, the band is going to premiere a remastered high definition version of “Zombie” filmed at the London Astoria 2 show in 1994. The video will be released tomorrow, Thursday 3 October, at 5pm (BST). 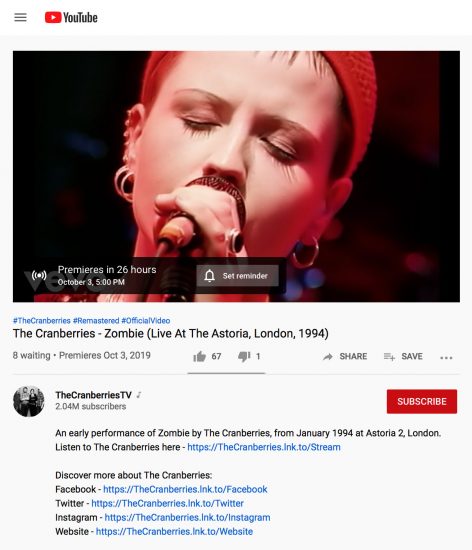 Additionally, udiscovermusic.com and prnewswire.com have also announced that, starting Friday 4 October, the remastered HD versions of The Cranberries music videos will be released exclusively on the band’s YouTube channel throughout the upcoming weeks:

There is also more information about the “Zombie” video that should be available in 4K very soon:

As you all know, the album “No Need To Argue” turns 25 tomorrow, we can thus expect more news in the upcoming days, especially as the band is to release an anniversary edition later this year; we shall thus learn more about the content of this boxset very soon now. Will it include a Blu-Ray version of the Astoria’s “Cranberries Live” (?) Time will tell…

The Cranberries just announced on their official website as well as their socials (Facebook, Twitter, Instagram) that an original test pressing for “In The End” will be up for the National Album Day/BRIT Trust white label charity auction this Saturday, 5 October.

Full auction details on omegaauctions.co.uk
The Cranberries (lot #38) on this link
All lots on this link

100% of funds donated will be used to contribute directly to mental health related projects and initiatives supported by The BRIT Trust. 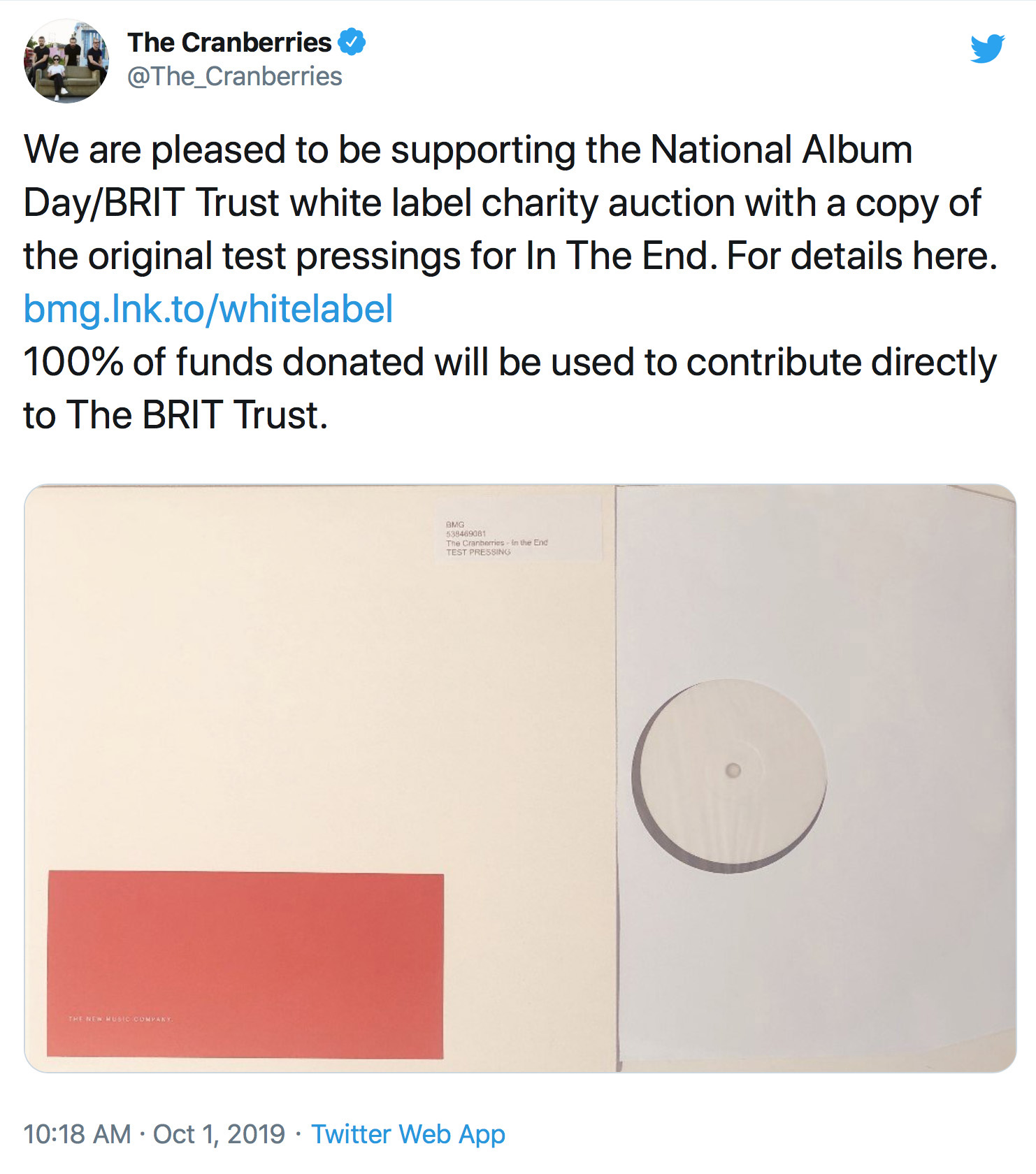