You are here: Cran World » Archives for February 2014

Dolores to join Zucchero on stage in New York

It seems that Dolores O’ Riordan will be joining Zucchero on stage in New York City at the Madison Square Garden on April 23rd. The Italian singer will indeed start his Americana Tour 2014 in March, though it seems only the New York City concert should include some featuring appearances under the name “Zu & Co.”

As usual, Dolores should be performing the song “Pure Love” which features on Zucchero’s album “Zu&Co.” released in 2004. 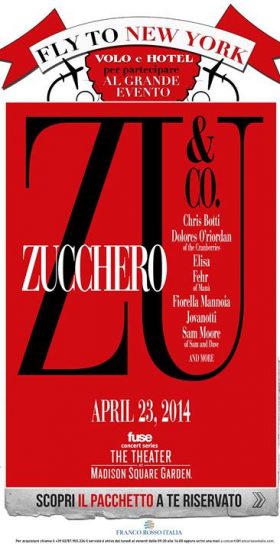 Tonight was the sixth and very last session of The Voice of Ireland’s Blind Auditions.
For this final round, coaches were expected to complete their team with at least 10 artists to go to the next stage.

With 9 candidates, one could thus think that Dolores wouldn’t hit the button much tonight, which is not what happened as coaches are actually allowed to go up to 12 artists if they want to. Hence the fact that our “talent magnet” fought twice during this show and managed to add 2 candidates to her team.

Peter Whitford was the first talent to get through this round with Dolores.
He actually managed to have all four coaches in a spin by revisiting the Spice Girls’ song “Viva Forever”. Coaches unanimously acclaimed Peter, which, as Bressie mentioned, doesn’t happen too often but was indeed well deserved here, as shown by the standing ovation Kian gave him. They accurately described his performance as unusual due to his rich tone and the uniqueness of his voice.
While Jamelia advised Peter to “maintain his own artistic integrity and make every song his own” as he had just done during the audition, Kian went as far as stating that he was “the best artist on the show this year“.
From her part, Dolores compared the uniqueness of Peter to that of David Bowie (!!!), explaining that his voice was as characteristic of his own alternative sound as he was reminding her ultimately of himself, which is a “massive potential to do something on a global scale“.
Like Jamelia, we thus hope we’ll see Peter go very far into the competition and are VERY happy of his coach choice. Very warm welcome to you, Peter. #TeamDolores

With a very different genre, Anna O’ Hanlon also seduced Dolores tonight with her lovely cover of “Cry My A River” by Justin Timberlake. Funnily enough Dolores didn’t fight much for the girl at first saying her vocal style was closer to that of Jamelia, which led other coaches to laugh at her saying words like: “that’s Dolores reverse psychology” or “was that a pitch, Dolores?“
Dolores eventually argued that joining her team would be a great opportunity for Anna as none of her candidates has a similar voice, she then used a secret weapon “see the ball, be the ball” to make sure she would convince the girl to join her team, bringing her to a total of 11 candidates. Welcome to you, Anna. #TeamDolores

Next round will thus see team members battle against each others in groups of 2 (or 3) by singing the same song. Time to tell us who are your favorites, and who you think will fight against each other 🙂 ….
Let the battles begin!

Dear all,
Sincere apologies for the delay in debriefing last week’s episode (#4) of “The Voice of Ireland”, we’ve been a little scarce lately and thought we should rather kill two birds with one stone tonight by reviewing the last two shows.

It’s fair to say that episodes #4 and #5 were rather centered on other coaches than Dolores as she obviously had the most on her team with 8 talents following the 3rd Blind Audition. Our favorite singer thus didn’t spin her chair much recently, although she did manage to add one candidate to her team at both shows:

Jamie Stanton made it through the 4th Blind Audition with his strong rock male voice which successfully convinced Dolores to turn for him. An interesting choice indeed which we approve here at CW as some of us, rock fans, enjoy the fact that Jamie will hopefully add “some decibels” to the TV show.

As for tonight concerning episode #5, Dolores was the only one to turn for Nella Dwyer and her surprising cover of “Best Song Ever” by One Direction. Although one could question the choice of her song, her brilliant “quirky” rendering should make everyone eye-to-eye: Nella’s unique signature thumbprint indeed really is beautiful and interesting.

Congrats to both of them for joining #TeamDolores
Now, let’s show Dolores’ team is “la crème de la crème” as she rightfully stated!

….as well as our major favorite Sarah Sylvia and her breathtaking performance of “Joga” by Bjork.
Although we do wish Sarah had followed her initial choice by picking Dolores (if ever you read this Sarah, what the hell crossed your mind ahah?) we do think the girl deserves a big shout-out on here as her blind audition will probably remain as one of the most mind-blowing of this whole season. Have a look: