Zombieguide has discovered the title of what could possibly be an unreleased Cranberries song titled “When I’m 21”.

The song was officially registered by The Cranberries through the Irish Music Rights Organisation and is listed in The Cranberries’ repertoire of written songs in BMI’s database.

The BMI registration number for “When I’m 21” is 5509119, which chronologically puts it around the time that songs for “Bury the Hatchet” were registered (“Desperate Andy” is 5700000). However, registrations for older songs like “Still Can’t” were also renewed at the same time.

The registry includes several obscure listings for long-forgotten Cranberries songs (“Like You Used To,” “False,” and “Yesterday’s Gone”), and also credits for songs used in TV show backgrounds for MTV’s “Fanatic” and “Undressed.”

The registry also provides another piece of the puzzle for the Gaelic song played at the London Underworld in 1991, commonly known among fans as “Iosa” (Gaelic for “Jesus.”) The official registered name for the song is “Atosa”. With this information in mind, Zombieguide will from now on refer to the song as its official title, “Atosa.” (If someone can give us the Gaelic translation for that, we’d appreciate it). “Atosa” was registered alongside many songs recorded for “No Need to Argue.”

Other songs are curiously missing from the database: the early song “The Same Old Story” and the unreleased “Wake Up” B-side “Seven Years” are nowhere to be found.

In other rumored news, the blog Dolores – para Iniciantes e Iniciados claims that The Cranberries surpassed 40 million in worldwide album sales in April of this year, but does not cite a source. We couldn’t contact the webmaster for confirmation, so if he/she is reading this, please send us an email.

We tried to contact Lindsey Holmes Publicity last week to confirm this news, but we got no reply. For the past year, Zombieguide has had no official contacts, and thus we cannot independently confirm many of the rumors popping up. If someone “in the know” is reading this and could help us in this regard, please contact me, as we’d very much appreciate it.

João Faria, who worked at last month’s Rock in Rio in Lisbon, has sent in some exclusive photos of Dolores’s surprise appearance there on May 28th. João was General Coordinator of the Better World Forum, where Dolores made her appearance in support of Amnesty International and performed with 1 Giant Leap.

João filled us in on more details about the event, and so we’ve updated our previews news story with his additions (corrections are in italics).

The photos are below. The people pictured onstage with Dolores at the roundtable disccusion at the Better World Forum are Michael Havas, Ivo Meirelles, Bill Shipsey and Margarida Pinto Correia. Photos 7, 8, and 9 are from Dolores’s soundcheck with One Giant Leap before the conference.

Thanks João! And if anyone else has more media from Dolores’s appearance at Rock in Rio Lisbon (or any of her other recent appearances), please email it to us to put up! 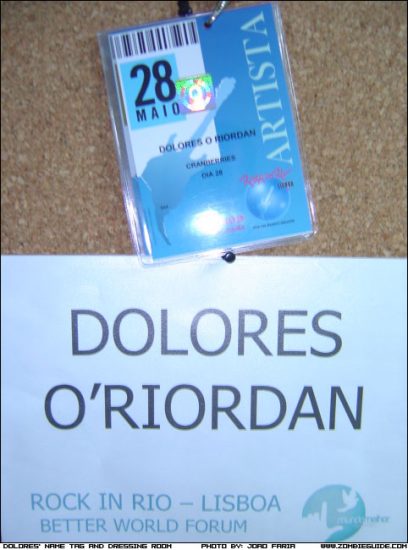 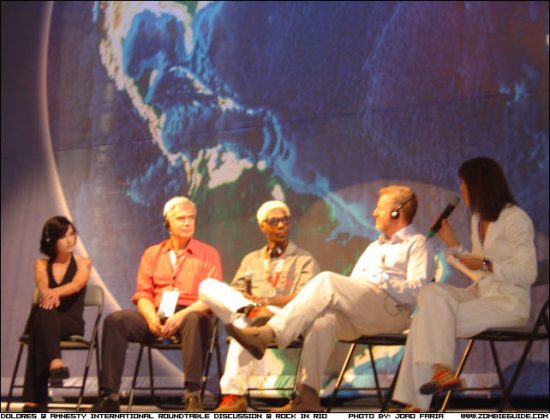 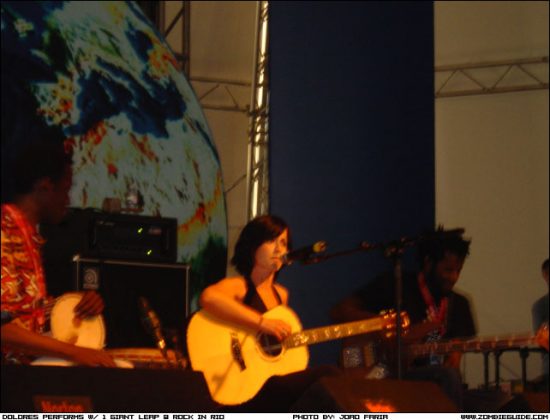 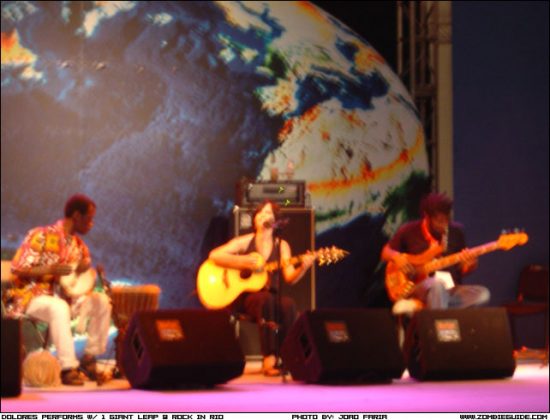 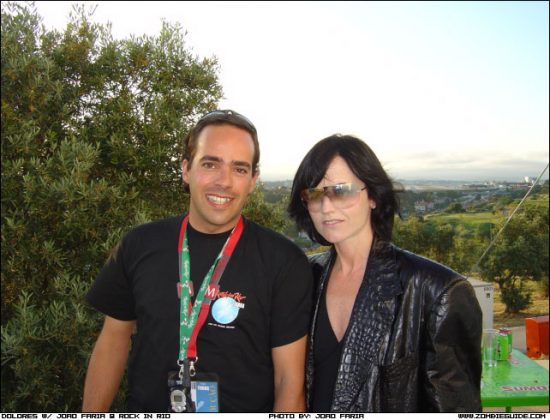 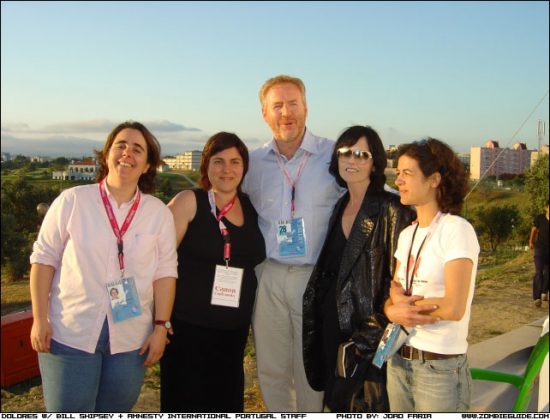 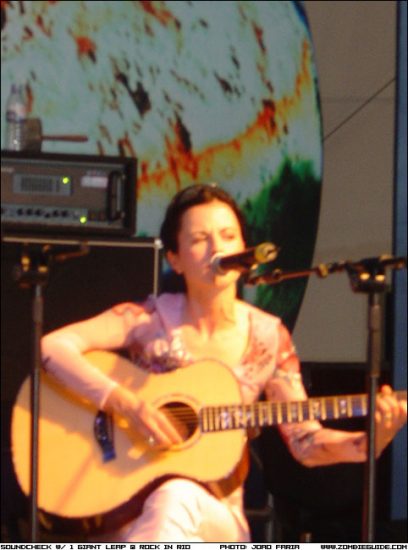 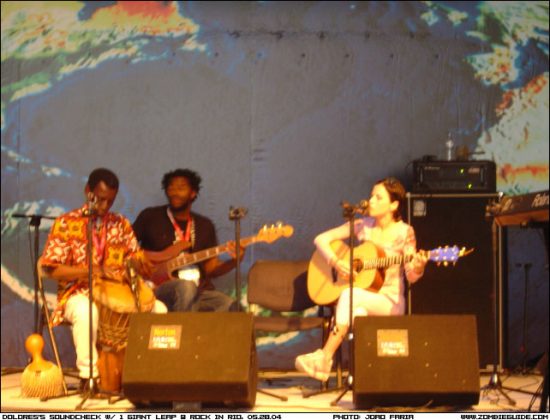 June 24, 2004  |  Comments Off on EvilEnko Soundtrack to Release in Late Summer  |  by Zombieguide Archives  |  Dolores O'Riordan

Zombieguide Forums member cranberry_india took the intiative recently to inquire about the status of the EvilEnko soundtrack, which was supposed to be released in Italy in April, but was delayed.

The response he got was from Phil Mann of Wide Black Sky. Mann spent last fall in Italy working with Angelo Badalamenti on the score for “EvilEnko.”

Mann tells us, “About the Evilenko soundtrack… There’s some good news: it’s going to be released by an Italian record label. I believe that the label is called ‘Minus Habens’ and it should be out later this summer.” He also mentioned that the question was passed onto Badalmenti himself: “Thanks for asking! I’m glad you liked it and I mentioned your post to Angelo, who loves to hear from his audience.”

The EvilEnko soundtrack will contain two versions of Dolores O’Riordan’s “Angels Go to Heaven”: the original “synth mix” from the film version and a “full band mix.” If you can’t stand the wait until the end of summer, you can download preview clips over at the special section at CranberriesItalia.

Of course, thanks to cranberry_india for the news. Zombieguide will have more on Dolores’s solo projects very soon, so keep it tuned here.

In the June 2nd issue of The Daily Telegraph, editors for the British newspaper put together their list of the “Top 10 Break-Up Tunes” of all time. The article reads, “Breaking up is hard to do. Or if you’re Eamon, it’s downright blasphemous. We all cope with the end of a relationship differently. Women tend to cry their weight in tears while men tend to drink their weight in alcohol and plan a trip to Bali with the boys. But those of us who are musically inclined are able to vent through song. SLM’s Penelope Cross looks at 10 of the most memorable break-up tracks.”

The Cranberries’ “I Can’t Be With You” got into the list at #10. Here’s what they had to say about the song:

The songs on the album from which this track was taken were all written after singer Dolores O’Riordan broke up with her first “big love”. As a result, No Need To Argue has hurt written all over it and is a very personal piece of work. Not that it bothers Dolores: “I’m not ashamed of the way I feel, why should I be?” I Can’t Be With You has a slightly faster pace than some of the other album tracks but it’s the singer’s enunciation and emotion that make this song about missing someone so great. It includes lyrics like “Thinking back on how we were/And how we loved so well/ I wanted to be the mother of your child/And now it’s just farewell”.

Leading the list are “Lovesong – Amiel,” “Last Goodbye – Jeff Buckley,” and “Cry Me A River – Justin Timberlake” at the 1, 2, and 3 spots, respectively.

June 22, 2004  |  Comments Off on Sony to Release 11 Different Versions of “Music From and Inspired by Spider-Man 2” Worldwide  |  by Zombieguide Archives  |  Dolores O'Riordan

Zombieguide exclusively reported last October in our interview with Cranberries sound engineer Mike Plotniko that Dolores O’Riordan recorded a song entitled “Black Widow” which was to be included in the “Music From and Inspired by Spider-Man 2” soundtrack this month. Unfortunately, the song didn’t make the final tracklisting for the American version of the soundtrack.

However, Scifi.com today relayed the news from Variety magazine that Sony plans to make the unprecedented move of releasing 11 different versions of the soundtrack throughout the world, each with a di erent tracklisting. Each tracklisting will be tailored to appeal to each region’s audience; which is good news, considering that Dolores O’Riordan’s o ering would be much more appealing to a, say, mainland European audience, than an American one.

Update 12:22 AM: We just got a chance to read the full article from Daily Variety and it appears that Dolores O’Riordan will not appear on any versions of the soundtrack. The article lists most of the international “bonus tracks,” all of which are by Sony artists. I suppose we’ll have to wait until a future release to hear “Black Widow.”

Thanks to Icicle Melts for the news tip.

The new Jam & Spoon album “Tripomatic Fairtyales 3003”, featuring Dolores O’Riordan on “Mirror Lover,” has been moved back yet again to Monday, June 21st and not June 14th, as previously announced. The album has received many delays since it was first scheduled to release last October. This release date only applies to Germany and surrounding territories, but of course, you can buy it online from your favorite e-tailer (The Cranberries O cial Site should have it available soon).

You can view RealVideo streams of the first two singles below:
[LINKS NO LONGER AVAILABLE]