You are here: Cran World » Archives for August 2019 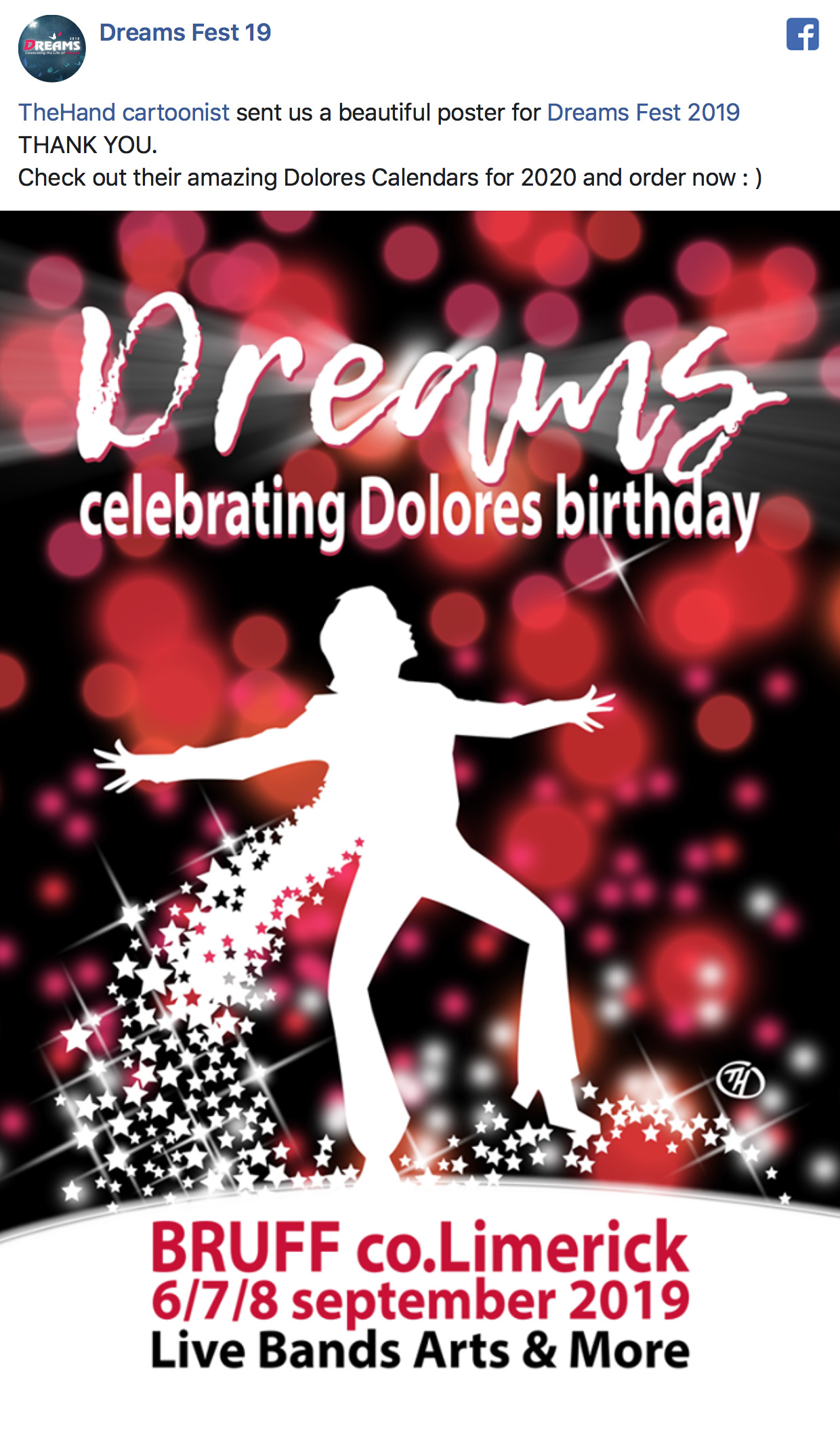 limerickleader.ie “Rugby stars Hayes and Steed are on hand for Dolores tribute in Limerick village”

August 24, 2019  |  Comments Off on limerickleader.ie “Rugby stars Hayes and Steed are on hand for Dolores tribute in Limerick village”  |  by Axl  |  Dolores O'Riordan 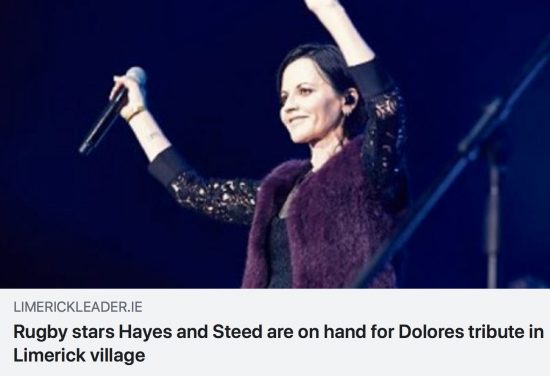 The full Dreams Festival 2019 line up was published this morning, including stages and timings (except for Mary Howards). You may notice a few changes than what was originally announced: 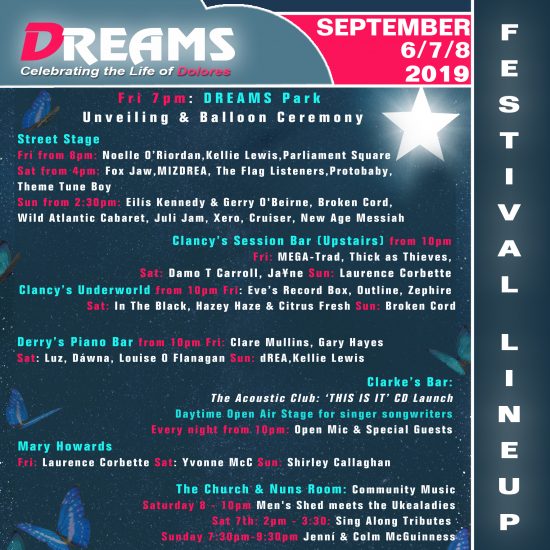 Another tribute concert to take place in September in Galway

August 21, 2019  |  Comments Off on Another tribute concert to take place in September in Galway  |  by Webmaster  |  The Cranberries

Tickets are €12 and can be purchased online (roisindubh.net) or on the door. 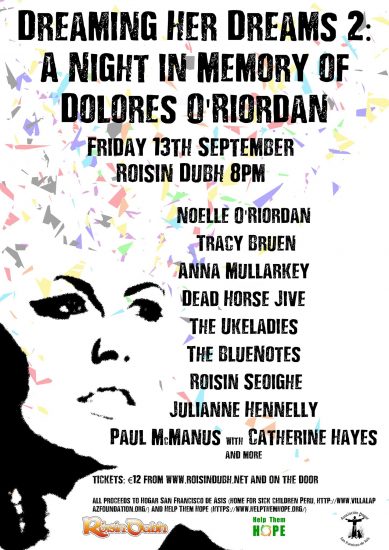 All the money raised will go towards two charities helping sick kids and young adults with disabilities in Peru:
villalapazfoundation.org/
helpthemhope.org/

Short film “Told You” to feature an OST by Fergal Lawler

It looks like the short movie “Told You” funded by Limerick City Council & Limerick Arts Office, and which was just completed, is featuring a soundtrack written by our very fav drummer Dr Fergal Lawler.
We have no info yet as per when this short will be released. 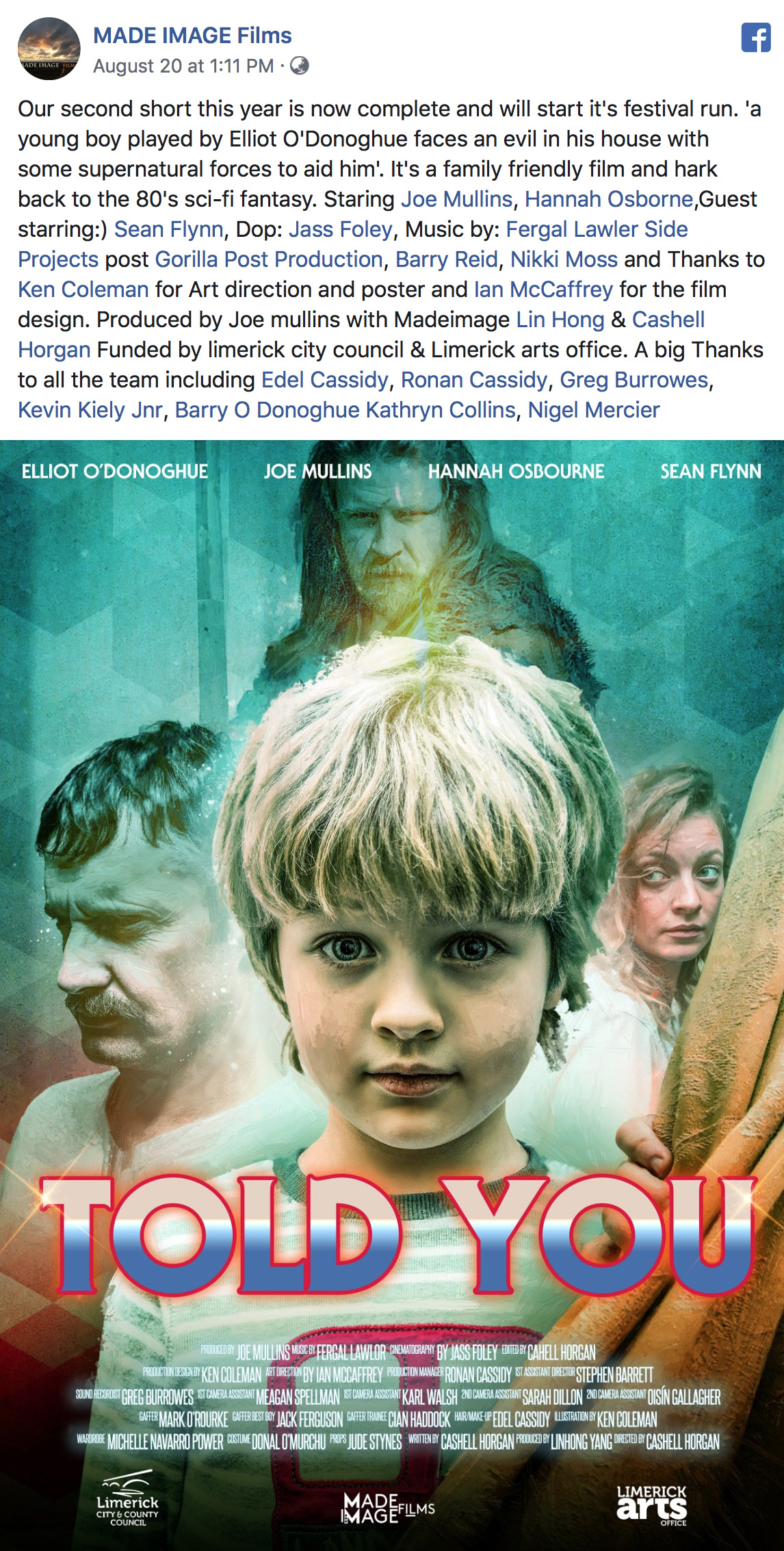 Thanks to Sigma for grabbing our attention on this!

The iconic Windmill Lane Studios where The Cranberries recorded some of the tracks of their most famous albums (Everybody Else Is Doing It, So Why Can’t We?,  To The Faithful Departed, Bury The Hatchet, Wake Up And Smell The Coffee, as well as some Are You Listening? tracks when Dolores went solo) have announced they’re now open for exclusive tours for the public!

This one-hour tour “presents visitors with an unprecedented opportunity to understand the creation and production of some of the most iconic albums and songs of the past 40 years […] using a balance of technology, audio-visual media and intuitive storytelling“ 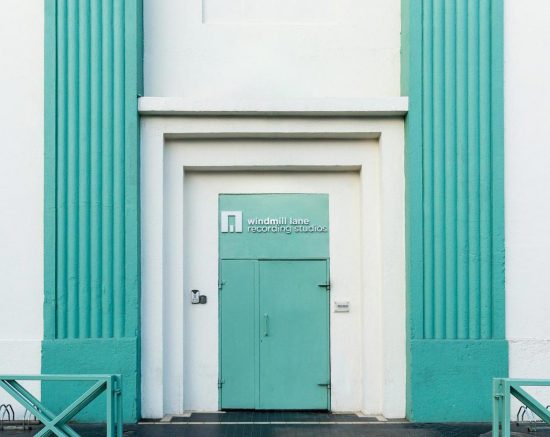 Walk-in is not possible, fans who want to attend the tours need to book in advance on their website.
More info on windmilllanerecording.com

Dreams Festival coordinator, Julianne Hennelly, revealed most of the line up on Limerick City Community Radio earlier today. Podcast is already available below, for those who’d like to listen to the show:

As we know, the festival focuses on bringing the local rural community together, celebrating original artists music, which explains why a number of the announced acts are unknown to foreign people, but some of these will definitely ring a bell for Cranberries fans:

Indeed, one of the first act to be announced was Kellie Lewis, Dolores’ candidate at The Voice of Ireland 2014, but we also learned today that a former member of The Cranberry Saw Us will be playing at the festival as none other than Niall Quinn was announced (playing with his band Theme Tune Boy) !!!
Fans are also familiar with artists such as Jane Fraser (Ja¥ne & Eves Record Box) or Sarah Croker, who were part of the I Heart Cranberries tribute concert last year, and will be performing this year in Bruff.

Here’s below a list of the acts who will be performing at Dreams Festival 19:

The launch ceremony will take place on Friday 6th at 7pm in the park by the River Morningstar where Dolores & Eileen gave an interview to Barry Egan on April 27th 2014. Children will be invited to write their dreams on balloons, that will be released during the ceremony.

Julianne also announced that the festival will feature a Church place at Kennedy Rooms where people can go and sing along.

limerickleader.ie “Park in County Limerick village to be named after Dolores O’Riordan”

August 17, 2019  |  Comments Off on limerickleader.ie “Park in County Limerick village to be named after Dolores O’Riordan”  |  by Axl  |  Dolores O'Riordan

Read the article directly on limerickleader.ie or click image below to open pdf file. 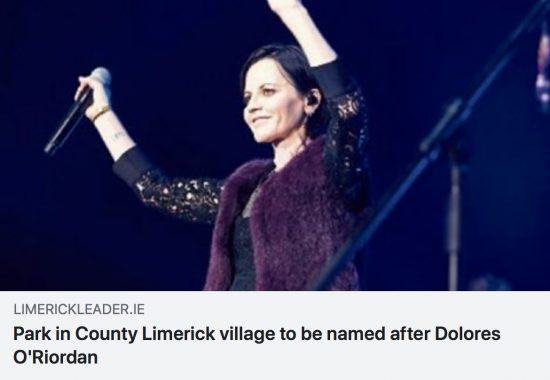 AUDIO: “In The End” Album Launch Party & interviews at Dolan’s

YouTube user Munster Multimedia published yesterday the audio of the “In The End” album launch listening party that took place at Dolan’s Warehouse in Limerick on 25 april 2019.

Thanks to The Cranberries Newspaper on Facebook for the link.

A few days ago, the artwork of a new festival dedicated to celebrating the life of Dolores O’Riordan called “Dreams Festival” was shared on socials.

Today, the Limerick Post reveals more details on this event that will take place in Bruff, co Limerick (Ireland) – in the area where Dolores was born and raised – on September 6 to 8 this year to celebrate her birthday and musical legacy.

Full line-up will be announced on August 17, but it is already known that Kellie Lewis – Dolores’ 2014 Voice Of Ireland’s contestant – will be performing! 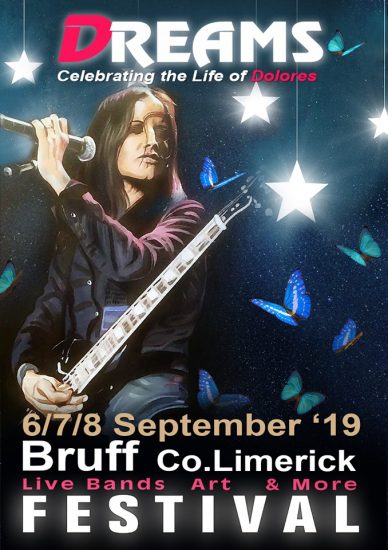 Journalist Eric Fitzgerald explains that “the town will also re-name its iconic park where Dolores was famously interviewed with her mother during her time as a judge on the Voice of Ireland. There will be a very special unveiling ceremony at the park on Friday 6” referring to the Barry Egan interview given on April 27th 2014 for The Independent.

Promoters hope that the event will become an annual event to take place in Bruff on the first weekend of every September to celebrate original artists music as well as her homeland, and bring communities in rural Ireland together.

Read more about this celebration of Dolores and her memory on the Limerick Post’s article.

Here’s below their press release :

‘Dreams’ Festival
The community of Bruff are coming together to celebrate the birthday and life of one of their own. Born and raised near the town in county Limerick, she is regarded as one of the worlds greatest female artists: Dolores O’Riordan.
Dolores, who tragically passed away in January of 2018, was the lead singer with The Cranberries, a band who rose to international success in the early 90’s, selling over 40 million albums worldwide. Dolores was a prolific songwriter and also enjoyed a hugely successful solo career in the early 2000’s.
The Festival, which is taking place on September 6th, 7th and 8th will showcase an eclectic mix of exciting artists. With a focus on original music, the festival will also host talks, community music gatherings, comedy, cabaret and spoken word acts.
Rainer Lindheim, Co-Promoter and Stage Event Manager and close friend of Dolores said ‘We hope that this years event will be a seed-planter for an annual event to take place in Bruff on the first weekend of every September. It’s spirit is to celebrate original artists music and in some way to help showcase their own dreams’
The town will also re-name the iconic park where Dolores was famously interviewed with her mother during her time as a judge on the Voice of Ireland. She will have a very special unveiling ceremony on Friday the 6th.
The festival committee comprises of members of the business, arts and music communities in Bruff. Committee member, Jack Clancy, who is the proprietor of Clancy’s bar and music venue commented, ‘We hope it will be a great weekend for the village and everyone both in Ireland and across the world who loved Dolores and wish to celebrate her legacy’
Brendan O’Riordan, brother of Dolores has said, ‘we want to celebrate Dolores and her memory. I have spoken to so many people who she inspired with her music, her songs helped them cope through the dark times and encouraged them to write and play, many of them will be performing for the weekend. People in rural Ireland are often isolated and music helps bring communities together and that’s what we aim to do on Dolores birthday’
Festival Coordinator Julianne Hennelly stated ‘as an artist who works in the area of mental health I am honoured to be part of this project. Dolores has helped so many of us struggling with depression in Ireland and throughout the world, we want to celebrate her homeland which inspired her art and kind nature. Rural Ireland is the most beautiful healing place to be, with it’s friendly, easy going way of life. Bruff has it all, lakes, historical sites, rivers, parks, cafes, big music venues and most importantly a very strong community spirit’
Full programme and information on events throughout the weekend will be launched on August 17th.