You are here: Cran World » The Cranberries » Chunky News Bits

The pretty Cranberries has posted a nice set of news bits, coming from a recent chat of the band at the Mexican page El Foco (“The Center”). The following has been confirmed:

-Album #5 is currently slated for a June 2001 Release
-The fifth album will include a 4-string quartet, as seen in the first few albums
-The band has finally gained full rights to the “Uncertain” EP and is considering including the tracks in an upcoming B-Sides/Rarities compilation (Can we say “Odd Bits & Hits”?)
-There has been quite a stir recently (ie “The Cranberries Revolution”) about MTV’s refusal to play “You and Me”. The band is not concerned, as there are many other ways to present their music.
-Dolores is still considering making a film when she gets time off from touring
-Fergal is in favor of MP3’s on the Internet, but Dolores is against it (Interesting… we all know Fergal can’t afford the real CD’s!)
-Fergal is very happy with the birth of his son
-They do not consider their music Celtic
-The band doesn’t think they are competeing with U2, as the only thing they have in common is their origin
-Dolores is planning on changing her hair again…. (so what’s new?) 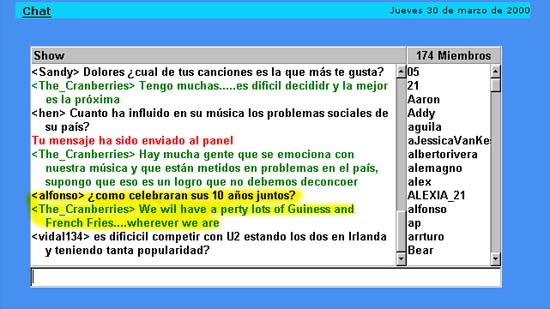