You are here: Cran World » The Cranberries » ShowBiz’s interview with Dolores

January 10, 2001  |  Comments Off on ShowBiz’s interview with Dolores  |  by Zombieguide Archives  |  The Cranberries

ShowBiz Ireland, a premier entertainment source around Ireland, recently had an exclusive interview with Dolores shortly after the band’s gig at Vicar Street for the MTV Awards party. 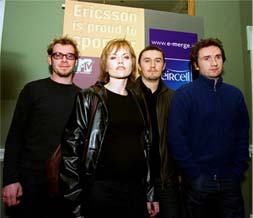 Shortly before the show, Dolores, six months pregnant, said that she was looking forward to it. “It’s something I always wanted to do. I felt it would be an experience to play a concert while I was pregnant…. I’m really looking forward to playing at Vicar St. It’s a real treat, it’ll be a little different for a couple of reasons not only because I’m pregnant and I won’t be able to perform my usual stage gymnastics – it’ll be a completely different stage show but also it’ll be the Cranberries first really intimate gig since the early nineties when we played much smaller venues.”

When asked why they were going to play at the small Vicar Street gig and not at the awards themselves, the band responded, “We were not asked to play at the awards. We have in the past but as well as this it may be a bit too much to travel to Sweden and play a big gig with Dolores as pregnant as she is.”

Interestingly, ShowBiz talked long enough with Dolores to squeeze some social commentary out of her. “The state of our planet is something I’m getting concerned about. There will always be political problems; it’s our human nature. When I was younger I didn’t give a toss about the planet. I was a teenager and I was too busy partying. But the older I get the more I’m concerned about the planet, [even] more so again since I became a parent.”

Hmmm… perhaps we have some thematic structure for Album #5? We’ll have to wait and see.