You are here: Cran World » The Cranberries » “From a Whisper” cover art, info

“From a Whisper” cover art, info

As previously reported, a new DVD title will be released on Tuesday, titled “From a Whisper to a Scream”. The documentary covers over thrity years of Irish music history, including of course, The Cranberries. We now have the self-description of the release, from its back cover:

“Ireland in the 1950’s was a gray and conservative place. Elsewhere, it was the decade that heralded the birth of rock ‘n’ roll. But as the ’50s accelerated into the ’60s, an emerging generation began to turn on to the revolutionary sounds that were changing musical expectations and values around the globe. Irish songwriters and musicians embarked on an adventure that, in time, would lead to an explosion in creativity and achievement unparalleled anywhere in the world.

“Ireland, a small country off the Western coast of Europe, has succeeded in producing some of the most popular and acclaimed music of recent decades. It has done so to an extent that is completely out of proportion to its size. From a Whisper to a Scream focuses on the extraordinary individuals behind this story. It traces the evolution of the music, from its humble beginnings in overcrowded dance halls and beat clubs to the glittering venues where it is performed today. Featuring rare archival footage, exclusive interviews and live performance clips, this electrifying film presents thrilling highlights from over 30 years of Irish popular music.”

The documentary appears to be a limited release, so if you’re eager to watch it, you may want to try some online retailers. 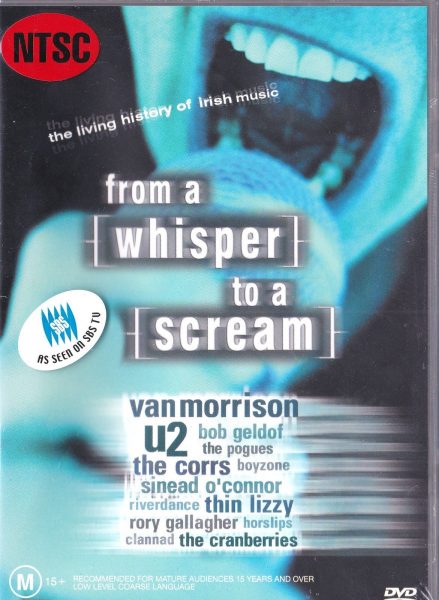