You are here: Cran World » The Cranberries » Album recording to restart in 2 weeks

Album recording to restart in 2 weeks

The Cranberries’s official page has updated, relaying the current status of the album-in-progress. As planned, the band minus Noel met last week with producer Stephen Street. Dolores and the rest of the band have been writing several bits and pieces since the group adjourned their last recording session in September. Street says that he “loved” the new pieces, which is a good sign for us all.

The band will once again return to Dublin’s Windmill Lane Studios on April 16th to record the second batch of tracks for the yet-unnamed fifth album. As you will recall, the band’s first batch of songs were mixed last December in Dublin.

In other news, congratulations to guitarist Noel Hogan on the delivery of his second daughter, Sophie Hogan, on March 26th, 2001, in London. As you probably know, Noel was absent from last week’s rehersal due to his wife’s pregnancy.

And finally, we have a photo of Stephen Street from last week’s session. 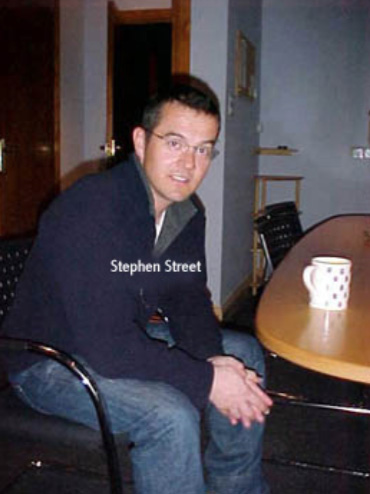