The episode of “Ireland’s Greatest Hits” featuring “Zombie” is set to air tomorrow, June 11, at 8:30 PM local time on the Irish Network RTÉ 1. This is the seventh episode in the series. Here’s a summary of The Cranberries portion:

At the time of releasing the song in 1994 Dolores says she was young and naïve. It was 11 weeks in the charts and reached no 4…

Dolores was over in London reading an article about a woman pushing her baby in a pram when a bomb went off . The baby died but the mother survived. The song is about the feeling of terror that the mother must have suffered to see her child die, how twisted the world is and how politics affects ordinary people’s lives.

There was a lot of speculation about the song at the time – it was seen that the young band were meddling in politics and terrorism. Dolores is the youngest of 7 daughters. It was really inspired by the fact that Dolores was a woman. At the time she was getting married there was alot of controversy.

The song was taken from the Album No Need To Argue which sold over 15 million copies worldwide. Dolores was painted gold in the video to neutralize her sexuality, and yet make her stand out. It was quite a biblical song: imagery of the cross, children representing innocence around the cross.

The song opened a lot of doors for the band – it gave them an edge. In 1995 the band won an MTV award for best song with `Zombie’.

Dolores never thought she would be 29, mother of two children and still recording, touring [and] currently recording an album in Windmill Lane.

Dolores recorded the segment on April 20th, in the midst of finishing production on “Wake Up and Smell the Coffee”. Other artists and songs to appear tomorrow include COME BACK TO STAY – Dickie Rock 1966, DADDY’S GIRL – TR Dallas 1981, and N17 – The Sawdoctors 1990.

And, saving the best for last, we have a small photo of Dolores from the segment, albeit tiny…. 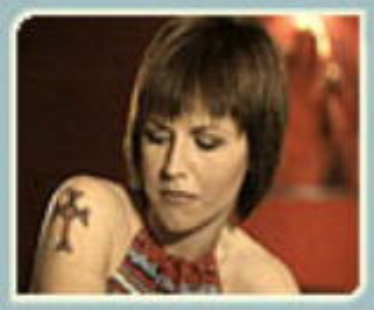