You are here: Cran World » The Cranberries » MTV Asia: “Cranberries Smell The Coffee”

MTV Asia has posted an interesting news story about the Crans. Although most of the information is previously known, it does feature an “insider” quote of why the band left Island. Also included is another new photo of the band — which resembles another photo you may remember from the official site. This one, taken on the last day of mixing “Wake Up” also includes MCA President Jay Boberg on the far left. That makes the people in the photo, from left to right: Jay Boberg (President/MCA Records), Noel Hogan, Stephen Street (producer), Dolores O’Riordan, Mike Hogan, Fergal Lawler. 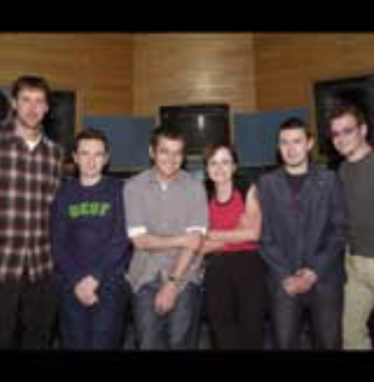 Irish rock outfit Cranberries have signed a new record deal with MCA Records and are planning to release the group’s fifth album titled “Wake Up And Smell The Coffee” on October 23, 2001. According to WENN, the band have decided to switch labels when their contract with Island ended after their last album “Bury The Hatchet” failed to do as well in America as their previous releases.

A music source says, “The band feel there is a lot of lost ground to be made up in order to attain the same level of success that they once had again.”

The band have also engaged the help of producer Stephen Street (The Smiths, Morrissey, Blur), who also produced the band’s first two mega- selling albums in the early ’90s.

To promote the band’s new album, Cranberries will go on a global promotional tour in early August to December 2001, after which, a world concert tour will follow in Spring 2002. — Lennat Mak