You are here: Cran World » The Cranberries » “OH LORDIE” WE MET FERGAL! Part 1

As we posted here earlier, Zombieguide editor Cranguy made the pilgrimage yesterday to Baltimore, MD, to the Mistletoe Meltdown 2001. Sure, the concert was incredible beyond description, but that wasn’t the ambrosia of the night. Pictures, setlist, all the good stuff is coming soon.

Weeks before the event, I had planned to meet Paul (aka “YeatsGrave”), an internet veteran of all things Cranberries. The plans somewhat fell apart, but I had told him approximately where I was sitting, and by stroke of luck, he found us.

Several bands after The Cranberries, Alanis Morissette was in the midst of her gig, after a tedious and buzz-killing hour-long setup. It was then that Paul rushed over to me, yelling as best as he could over the speakers, something about, “If you want an autograph…”. I really didn’t know where he was going with that, but I grabbed my coat and followed. We went back near where he was sitting, very close to the mixing area.

Step #1: First Encounter With Angry School Bus
Behind the flimsy barricade stood a starkly familiar face that I caught with several eye scans. It was Fergal! He stood beside Russel Burton, the band’s backup keyboardist. I took a slow step toward the railing, when a chunky, intimidating woman in a yellow event shirt (who I mistaked for a school bus for a second), yelled with a blunt grunt, “No walking through here!”. I point at Fergal, and she jiggled her head from side to side in a commanding, “NO!”

Step #2: Negotiate with Angry School Bus
I walked away disappointed, but not beaten. I looked back and saw the creature had returned to her aluminum chair. She stared at me. I walked back towards her. “Can I please get an autograph from The Cranberries’s drummer?!” I pleaded. Once again, the growling, “No!” Nazis. *sigh* But I know she was only doing her job. At this point, I was carefully choosing two options: Performing an illegal act by passing a school bus while it is showing its bright red “STOP” lights or go back to my seat and wait for a better time. I wisely chose the second.

Step #3: Waiting in the Rain
I said to my friend Chris (who will have his own impressions up here soon), “As soon as her set’s over, we’re running back there!” Begrudgingly, I looked back impatiently while Alanis shrieked on stage. Finally, I looked back and Fergal was gone. So much for that plan.
So her set was over. I walked back stealthfully past the mixing area once again. He was definitely gone. Odds are, he was still in the arena, however. Now another two options: Carpe diem or watch a band I care none about. I knew that there was no re-admission when I walked out the door, but that was fine. Things were getting repetitive.
As I started walking out, Paul and his significant other caught up. I asked them if they wanted to try to catch them, but when they realized they wouldn’t be able to get back in, they hesitated, and so we said what I thought would be our final goodbye.
So Chris and I stood for a half hour in the drizzling rain, among an angry hoarde of Alanis junkies. Poor Chris. Didn’t even have sleeves on his fleece. After a few minutes, Paul and his boyfriend changed their minds and met up with us. And so we waited and waited.

Step #4: Desperate Yelling
Finally, a few figures appeared, walking out of the underground entrance. Paul began yelling, “Cranberries!! Wohoo!! Yeah!!” while my eyes were still focusing on the dark shadows.
“You guys want some autographs?” yelled one of the band’s backups. “YES!! PLEASE!! AUTOGRAPH!! SIGN!! FERGAL!!” I yelled desperately, waving my poor, unfortunate, wrinkled-by-excitement “Uncertain” EP in the air. They gave a hearty laugh. The door to the immense tour bus opened. They stepped on, and the engine started.

Step #5: Final Desperation (Warning: Kids, do not try this at home)
I stood silently, prepared to have my fragile, flabby heart snapped in two. Paul, who met Fergal at the sound mixer with no 2-ton encounters, was already content. “That is coooold!” he told me with emphatic sympathy.
I ran alongside the bus, with another flimsy barrier between me and my goal. At the front, I found the only window not tinted and shut with blinds — the driver’s window. I leaned over the barrier, hoping that he would recognize the band’s first commercial release, or even more so, my frantic pointing and my “air signature”. He looked at me and laughed. Minutes later, a roadie came to the front of the bus, enjoying a “beverage”. He also stared at me, holding his cup with one hand, and a hopeless, sarcastic thumbs-up given with with other.
At this point, I was the personification of desperation. I was down on my knees, holding Uncertain between my begging palms. Finally, Chris got the most stupid yet brilliant idea of a lifetime. “I got an idea!!” he told me, “Give me your Sharpie!”. He pulled a soiled napkin out of his pocket, thanks to the overpriced “Super Dogs” at the concession stand. He unfolded it, and wrote, “ZOMBIE GUIDE.COM” and held it up to the window, joining me on my knees, his knees in a puddle, whilst Alanis junkies began gathering around us for some second-hand excitement.

Success: “Oh Lordie!”
Could they be so heartless? I was bound to find out. I saw some heads inside turn around, and I hoped for the best. A figure approached the front and I recognized him as Fergal! Without thinking I ran to the back of the bus, thinking that he would meet me where I was standing when they boarded. I looked back and saw Fergal standing at the rail.

He held out his hand and I ecstatically shook it. “Hi, I’m Alex,” I said with an insuppressible grin.
“You’re not Alex from Zombieguide, are you?”
“Yeah!”
“Oh Lordie!” he said, “Zombieguide’s awesome!” 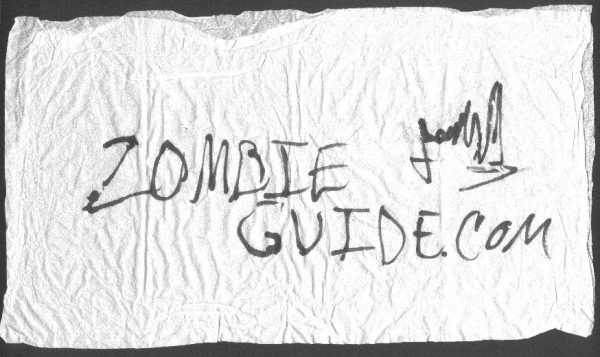 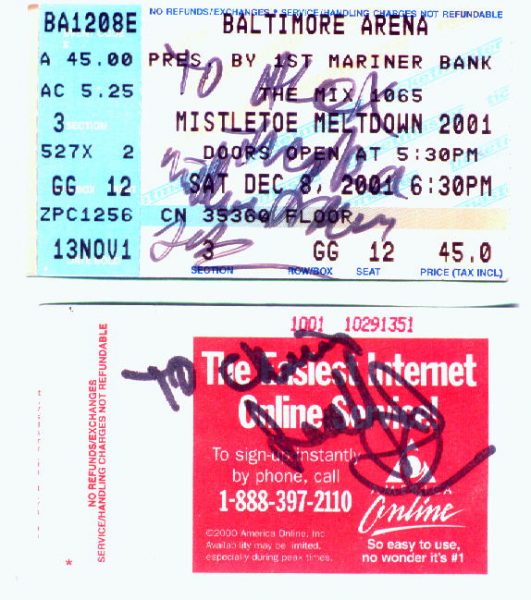 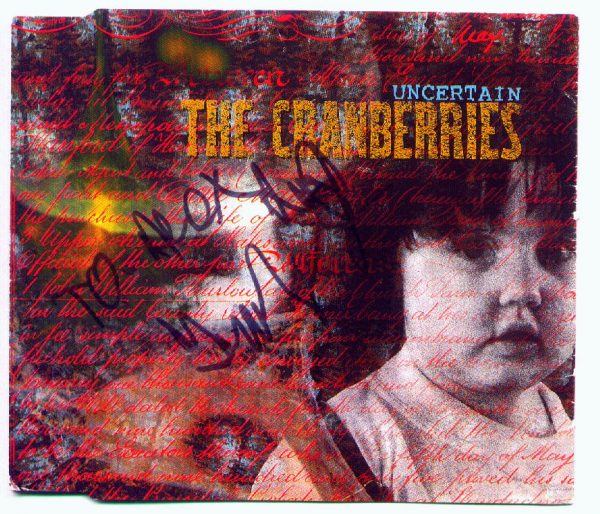