You are here: Cran World » The Cranberries » Dolores presents an NRJ Award

January 19, 2002  |  Comments Off on Dolores presents an NRJ Award  |  by Zombieguide Archives  |  The Cranberries

Earlier tonight, Dolores O’Riordan was on stage at the prestigious NRJ Music Awards 2002 in Cannes, France to present the award for “Best Song of the Year”. Dolores, on stage with French-Canadian singer Garou, presented the award to Geri Halliwell. Dolores demonstrated a bit of her francophone, ending with her oft-used humble phrase, “My French… comme ci comme ça, français de l’école (My French… it’s average, school French).” The Cranberries were nominated for “Best International Group” (along with U2, Daft Punk, and Depeche Mode), but Destiny’s Child took home the award.

The Cranberries were invited to kick off the Midem Music Conference earlier in the day with a private gig at Cannes’ The Palm Beach. Only five pairs of tickets were given away through NRJ radio (with an insultingly easy contest: Find The Cranberries among a mix of Madonna and The Corrs songs), which made it a very private concert indeed.

Thanks to Uriel de Santiago Martinez for the news. 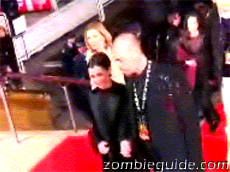