Ali Hewson, wife of Irish mega-group U2’s Bono, was on hand at a launch ceremony earlier today in Dublin to kick off the release of “Time Is Ticking Out”.

Dolores wrote the song well over a year ago, inspired heavily by Ali’s work with Chernobyl victims. Dolores said in an earlier interview, “Chernobyl was a big issue for a long time then it slipped away. Then I picked up a newspaper. I remember my daughter was probably three months old [sic] and there was a picture of Bono’s wife Ali, who raises funds for the Chernobyl project. I looked at pictures of her with the children and it totally broke my heart and that’s where the inspiration came from.” Interestingly enough, the track was actually written before the birth of Dolores’s daughter, as it was first performed at Vicar St. in Dublin in November of 2000.

Both Dolores and Ali were on hand at the ceremony, which was held around noon in the U2-owned Clarence Hotel in the Temple Bar district of Dublin. Also in attendance was Adi Roche, founder of the Chernobyl Children’s Project.

“I had just given birth to my second child, a beautiful healthy little girl,” Dolores said at the event. “It was at this time that I read an article in a paper which featured The Chernobyl Children’s Project. I had spoken briefly with Ali on the subject before this, but I was so moved, almost to tears, that I wrote ‘Time Is Ticking Out’. It was inspired by the children and I hope I can raise awareness on this issue. It shouldn’t be like this — we must do something about it.”

Roche commented that the title of the track was very relevant to the cause, as new health problems are only now coming to the surface from the 1986 nuclear incident. Effects, she said, were crossing generations, as children “are witnessing soaring levels of genetic changes, especially among those who were less than six years of age when the accident happened.”

Roche founded the organization in 1991, which has raised nearly $15 million to date for victims of the catastrophe.

Dolores O’Riordan revealed at the ceremony that all of the proceeds of the single will go to benefit the Chernobyl Children’s Project.

“Time is Ticking Out” will be released in Ireland on February 15th.

Pictured below, from left to right, are Ali Hewson, Adi Roche, and Dolores O’Riordan from the event earlier today. 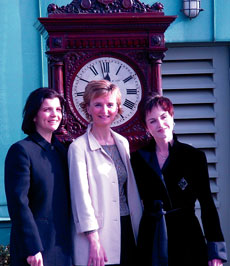