You are here: Cran World » The Cranberries » Zombieguide’s Copenhagen impressions

February 19, 2002  |  Comments Off on Zombieguide’s Copenhagen impressions  |  by Zombieguide Archives  |  The Cranberries

Zombieguide Europe webmaster Norbert Brühn was on hand at Saturday’s Copenhagen Denmark gig — well, half of it anyway. Thinking that he was successfully on the “Photo Call List” for Zombieguide, he was about to have a rude awakening, thanks to some overreactive security — something The Herald’s Alex Kraus knows a little bit about… Here’s what he told the Herald…

First, let me say I had mail contact on Friday to get a photo pass for the concert. He wrote that the tour manager will put me on the “photo call list” and wanted to send me the details later, after I gave him my full name and contact details. But all these were too late…

So we went to Copenhagen on Sunday without these details (I thought it would work so). We started to make photos as the concert began (at 8:00 PM) and all seems to be okay (I had already about 15 photos). After nearly 70 minutes, the concert was over for me (and the two other people with me). After 70 minutes we had a confrontation with the Vega security (they had “Vega” on their t-shirts, the own security of the promoter!). The security got us out of the Vega hall, first me and then my friend (in a not really friendly kind of way). After a long discussions they took the film from my friend (as for himself, he took out the film and put it into his pocket on the way down the floors when we went with the security people). They wanted my film too of course. But I had a high res digital camera with a memory card. After further discussion with me, I gave him my camera (the security’s face already looked very bad so I thought he wanted to/will beat me in the face soon, and so it was better that I gave him my camera I think). He erased the whole memory card. And that was it. No pictures anymore. Then we went out of the Vega and I made the photo you can find below (Cranberries truck one street corner away from the Vega at 9:30 PM while the concert was still running) :- (( .

I should say that my friend (a colleague from my work) has been a journalist for over 30 years, but such a bad thing had never happened to him. None of the “security” gave us his name or any other details of their own. We were without any rights at that moment. We could do absolutely nothing

We were in the concert until the beginning of “How”. The sound in the hall was not so good, not as good as it could be I think. We sat on the balcony, 4th row. It’s difficult to describe the acoustic exactly. For example, it was difficult to hear any details of the keyboards and the second guitar player (Steve). The sound wasn’t clear. The bass sounded really deep (How to describe? Dull/musty sounds, not really clear). But that is only my own opinion (and I know how good it can sound in such a small venue). I think from a music house with great acoustic you can expect a little bit more. The band of course played very well. And a second thing I was a bit disappointed with: smoking was NOT forbidden in this little concert hall. You saw the smoke everywhere. I think it isn’t really good for such a voice as Dolores has and it’s difficult for her to sing under these conditions.

What else can I say from my little disaster? Sorry that I don’t have any other pics for you. It’s sad I know. I hope the next time.

Maybe I’ll go to another concert in Germany. For that I could get a photo pass.

We’ll have more concert reviews an impressions, very soon right here on Zombieguide! And if you’ve got any of your own, be sure to send them! 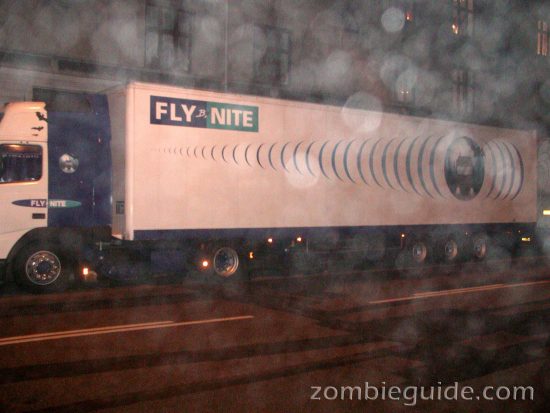