Four months ago, I had the extreme pleasure of meeting The Cranberries drummer Fergal Lawler outside of the Baltimore Arena. After lamenting that he had nothing on the tour bus to give me, he promised to “post something off” to me… something which arrived in my mailbox last week.

In the white envelope arrived two CD-Rs filled with the kind of elusive rarities that would make any dedicated Cranberries fan soil their panties. Along with the CDs came a typed tracklist from Fergal and a handwritten note from one of the band’s representatives. The list has a few errors, but they’re sorted out below…

But of course you didn’t click here to read about all that. Zombieguide is happy to present some exclusive full downloads of some of the rarest Cranberries demo recordings from 1990 to 1991, recorded on their first indie label, Xeric. To read more about Xeric Records, the Watercircle demo, and the Uncertain EP, read up on Zombieguide’s Ultimate Bio.

These tracks are still available for download from Essentially Cranberries (Links no longer available) (They were removed from Zombieguide due to high bandwidth consumption).

Watercircle, released in early 1990, is believed to be the band’s firt demo together with Dolores. The tracks “Chrome Paint” (aka “Crown Paint”) and “A Fast One” were among the band’s earliest tracks and never reappeared on any other recording, but were staples of the band’s early live set.

Of all the tracks on the discs, these must be the rarest. I never even knew of the existence of an “Uncertain” demo — keep in mind all of these tracks are very different from the album versions. An interesting thing to note is that the Uncertain demo, which already has some static in it, ends with a woman’s voice saying, “Uncertain by The Cranberries…” before it cuts out, suggesting it was taken from a radio broadcast. The version of “Reason” found here is identical to that prevously found on the Dave Fanning Sessions, but this version is nearly twice as long, as the Dave Fanning Sessions version seems to have been cut prematurely. It’s possible that the version of “Dreams” here is from one of the band’s early demo tapes, but it sounds nothing like the short clip aired on MTV’s Rockumentary. Nevertheless, the early cut of “Dreams” retains every bit of the subtle etheral beauty that would make anyone fall in love with it all over again.

Despite the notation on Fergal’s paper, these are all the EP versions from “Uncertain,” so nothing too terribly special.

One of The Cranberries’ earliest media spotlights was on 2FM’s Dave Fanning Sessions, where up-and-coming artists record in the 2FM studios for radio broadcast. The version of “Linger” here is the same recording found on “Watercircle” — probably aired on the radio mixed in with the sessions. “Wanted” is the same version that has always been associated with the Dave Fanning Sessions. The most interesting here is “Put Me Down” which is not the same version commonly associated with the session. The version that was prevously available is listed above under the Xeric demos.

The rest of the tracks (seen below) are all described correctly, although the John Peel Session took place in January 1992 (not 1991). The live tracks all seem to be taken from different gigs, all from the 1993-1994 era, all soundboard quality.

Well, so there you have it… some of the most rare Cranberries recordings known to exist, right here for you on Zombieguide.

And Fergal, if you’re reading this, major thanks!!!
And I hope to meet you again on the upcoming US tour.

Webmasters: You may post these files on your site, but you must include a link to Zombieguide.com on the same page. The files must be unmodified and be hosted on your own server. Or, alternately, you may link directly to this page but not to the files themselves. 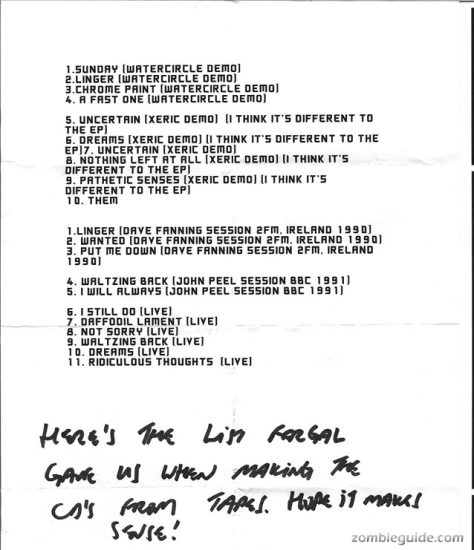 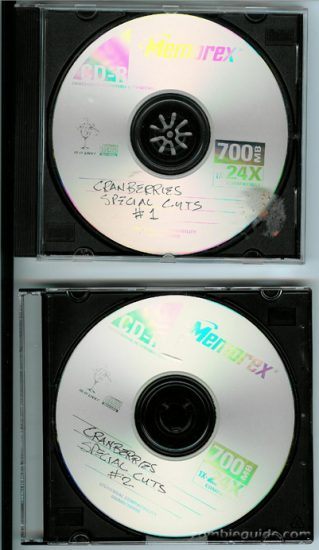