You are here: Cran World » The Cranberries » More “Star” impressions 3

We’ve got yet more impressions of “Star,” performed Wednesday night in Atlanta, GA, these coming courtesy of Gambit455 and (yet more from) Paul Beardsley, who attended Wednesday night’s show:

The concert in Atlanta was great!! I truly enjoyed it …every bit. She talked to the audience a great deal more than she did in 99 in Manassas, VA at the Nissan Pavilion. She apologized for not being there on the 30th. And, said thank you to the audience for coming back. She talked about the weather, mentioned how she had an ex-boyfriend from Atlanta who talked and said ‘ya’ll’. The crowd laughed. She dedicated Zombie to the Americans and said how bad terrorism is. And also mentioned she was taking her children to EuroDisney on their break after Atlanta. She called Taylor her ‘little man’. Also, Dolores’ voice was spectacular. She did wonderful … If there was an exception it had to be Time Is Ticking Out. It seemed the band was a bit off when playing that one.

But the new song was excellent. At the beginning, I tried to figure out if they were improvising on an old song but they weren’t…I turned to my sis and said “Oh my God…It’s a new song”. And it rocked!! It was a really great song. I loved it… Not just because I’m a Cran fan. But I enjoyed it very much. I liked the part which goes “I’ll take you just the way you are”… and the beginning starts “The stars are out tonight…” and it has a real catchy tune, like the official website says. I don’t think it sounds like When You’re Gone at all, as previously stated. At the end, Dolores stated “That’s a brand new one. We’ve never played it before”.

The outfits were cute. The stage was perfect. The audience loved it (especially Linger and DREAMS!! < everyone stood at dreams. It was a fantastic concert – well worth the 5 hour drive both times…hehe 🙂

“About “Star”, with all the action going on at the concert, I really couldn’t give an honest review. I was totally thrilled to be hearing new material, but without hearing the song a couple times, I can’t really say how good it was. It’s kinda like when I bought BTH and thought that I had wasted money. Now it’s one of my favorite Cranberries albums. Same with WUASTC.

The Concert:
“You’ll know IT”
We, my son Patrick and I, arrived at the park about 3:00 PM. The gates were wide open so we walked in and checked out my seat for the concert. I was impressed, row 7 seat 15 in the pit! We left soon after this to avoid being thrown out. After a quick trip to gas the car, I decided to scout for a good parking spot. I noticed a white van in my rear view mirror as I was driving past the rear entrance to the park. I was told later that the band had been in that vehicle. Damn! Missed them! Around 5:00 PM the soundcheck started and I heard Analyze! WOW! This was going to be good!
We met some really nice people before the show that I need to mention. Kenny was a trip in his beanie cap. And the other “10 year” fan whose name I failed to get. We had a great time discussing past and future CB hits. The entire band was AWESOME!!!!!!! Fergal appeared to be putting everything he had into his drums. He really appeared to be getting into it. Noel was on the other side of the stage from me so I didn’t get the whole effect of his performance. Mike, “DO IT MIKE!!”, was right on! He was directly in front of my seat for the entire night. Dolores was a real treat!!!! She really puts on a great show! If you’ve never seen her in person, you’re missing a real GEM! Her vocals were Outstanding! With so much going on, it’s like the whole concert was a dream. I was really rockin… Hearing “Star” was the highpoint because I’d been watching the setlists from all the past shows and had never seen a deviation anything like this! All of the songs were perfect in my opinion. It would have been a perfect night if some of the “non-rockers” hadn’t gone to security to have my son (and all the row in front of them) sit down so they could watch the show. Real Losers! EXCELLENT SHOW!!!!!!!!!!
I was too slow to get a setlist, damn! But, as the crowds were ushered out, I had a stage hand retrieve a small feather that Dolores had pulled out of the green boa she was wearing during “Pretty”. I’ll place it with my ticket stub in my collection of concert memorabilia.
“I’ve been to a hell of a lot of great concerts in my days, including U2 last May, but The Cranberries in Atlanta were 100 times better than either.
“I wonder if I can find a reason to be in San Francisco next month? 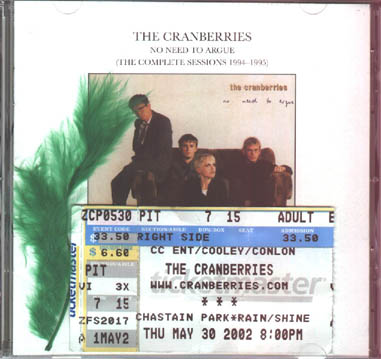