You are here: Cran World » The Cranberries » “Star” performed live in Atlanta!

It looks like the delayed Atlanta gig was definitely worth the wait. For the first time in several years, The Cranberries have played a previously- unreleased song on tour, according to the setlist posted on the band’s official page. The new song “Star” was sandwiched in the middle of last night’s setlist in Atlanta, Georgia between “How” and “Free to Decide.”

The band began to shy away from playing “new” songs on tour beginning with the Loud And Clear World Tour in 1999, warned by their record company (Island at the time) of bootlegging. In fact, this is the first “unreleased” track on record to be played on tour since 1995 — a time when the band would play up to six or seven “future” songs that were taken from the forthcoming “To The Faithful Departed.” Even the current Wake Up And Smell The Coffee World Tour has been fairly devoid of surprises.

It seems likely that the track will remain in the setlist for the next few gigs for all you lucky fans in Mexico and possibly Europe. Could “New York Skyline” be close behind? 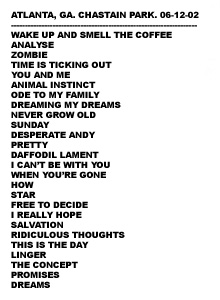