You are here: Cran World » The Cranberries » Mexican newspaper article

June 25, 2002  |  Comments Off on Mexican newspaper article  |  by Zombieguide Archives  |  The Cranberries

Apparently The Cranberries had good reason to deny the newspaper reports that hit the stands this morning — the one below reads, “The Cranberries already see their end” which is most certainly not true. Although the headline is very misleading, it does contain some important quotes, which we’ve translated below:

“That would be very nice, but we signed a contract for six discs, so first we have to release the Greatest Hits and another studio one, so that afterwards we can start our individual projects: I believe that we have many desires to take a break,” Fergal reportedly said.

Some of the other quotes are even more misleading, with the paper reporting that Dolores said, “It’s not like a marriage, and for that reason, I think we’ve spent too much time together. If we want to separate, we’ll do it”.

Although we can’t definitively deny these quotes (as some of the others in the article mirror the ones found in other reports), the band’s denial on Linea Directa earlier today should be enough to quell fans’ fears.

On another topic, the article also reports that Daffodil Lament is the imminent winner to the Official Site’s fan poll-contest, and will probably be included on the band’s “Best Of” disc this fall. Assuming that you haven’t thrown this whole article out the window yet, Dolores said, “We had a poll on the Internet page, where Daffodil Lament, a song which was never a single from the disc No Need To Argue, is winning.”

Thanks to Edgar Torres for the scan. 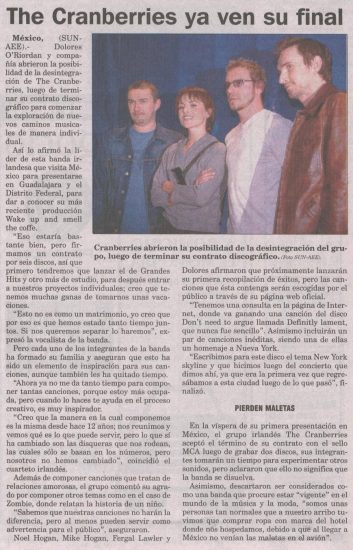 Also below is another press conference pic, sent to us by Uriel. Thanks to both.
But just remember — don’t believe anything you hear and only half of what you read! 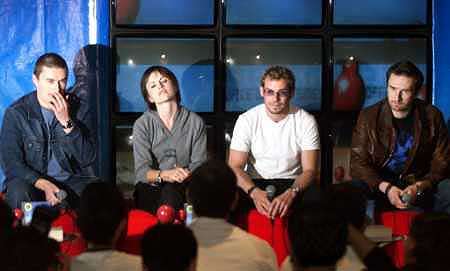