Reforma: The Cranberries desire a world of awareness

The Spanish site Reforma has posted another very similar article about the band’s press conference yesterday which seems to clarify some of the topics the band discussed.
Here’s a rough translation:

The Cranberries desire a world of awareness

Dolores O’Riordan, singer of the group, showed that it is necessary to approach more serious topics to wake up the conscience of people

By IVETT RANGEL/ Reforma
City of Mexico (25 June 2002). – They know that with a song they will not change to the world, but The Cranberries always considered it to be important to approach universal conflicts in his music, since they have done it with “Zombie” and “New York Skyline,” the last dedicated to the victims of the attacks of 11 of September last year.

The Irish group will appear today and tomorrow at the Auditorio Nacional.

Dolores O’Riordan, singer of the group, showed that it is necessary to approach more serious topics to wake up the conscience of people

“It’s lovely to share more things about life, not only songs about love or about conflicts between men and women.

“It is important to compose serious songs, although we know that these will not change anything, but it will help people to find out about things that happen and therefore, we can wake up consciences. That’s something we can do,” also explained the guitarist.

During a press conference, at which they arrived after one hour of delay, the musicians remembered that “New York Skyline” was written after their concerts in the Great Apple.

This one subject will be including in its next album, they say, which will compile their greatest successes, which will be chosen by their fans via Internet.

“It was like a reflection on how people live at the moment in that city,” O’Riordan said.

The band, also formed by the brothers Noel and Mike Hogan, guitarist and bass, respectively, clarified that they will not resort continuously to this type of theme, since they could bore their fans.

“There will always be terrorism and it will always be cowardly because it is, simply, the nature of the human race, but we don’t want people to become bored with us,” expressed Fernal Lawler, drummer of The Cranberries.

Prior to their shows at the Auditorio Nacional (25 and 26 of June) and at the Auditorio Benito Juárez, in Guadalajara (the 28 of June), where they will present their fifth album called Wake Up and Smell the Coffee, the Irishmen assured us that they are concluding their present contract with the MCA label, [and] they will create a new sound with a basis in individual compositions.

Lawler indicated that it is necessary to explore other styles, but that [it] will be after a disc of greatest hits and another yet-unpublished one with the sound that until now has characterized them, as it is stipulated in their contract.

“This does not mean that we are going away to separate, but it will only be to get some freedom,” he indicated.

“We’ve never worried about being a fashionable band, but [only] to remain effective in the eyes of the people,” concluded O’Riordan. 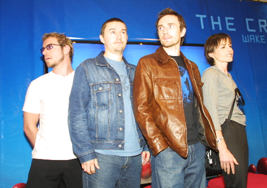 So now we’re not only talking about a sixth album, but a potential seventh one as well, with a foundation on individual compositions from each band member. Interesting…