You are here: Cran World » The Cranberries » Articles in TV Sette & Tutto

The Cranberries are mentioned in two new Italian magazines on newsstands this month, TV Sette and the oft-recurring Tutto. The first article, from Sette, takes a look at the ongoing Sprite promotion in Italy, which it praises as a “good idea.”
Here’s a translation:

Today it’s possible to download legally and practically free on your PC hundreds of songs, chart singles included. A TV spot [commercial] shows a guy in his car who asks another one:
– Have you got the latest Cranberries’ single?
And he, to answer him, points to a fridge full of Sprite, the drink in green bottle produced by Coca-Cola. On its wrapper there’s a special code which, [when] entered on the website www.thespriters.it lets, after listening to 30 second snipped files, anyone download one of the hundred songs of the Universal Catalogue. With some limitations: the file destructs itself at the end of 2002, and it isn’t copyable on a CD or even on another PC. We’re always in doubt when we’re publicizing about an advertisement, but it’s right, in the interest of those who read, publicizing a good idea. In this case also because it shows that not every major [company] has fear of the Internet. It is also a way to tell people how to act in regards to a product of talent which is a song, which can be enjoyed, like the sea, the beach, the sun, never possessed or stolen; after a work like writing, arranging and playing a song, a little expense (in this case the purchase of the drink) is justified. In the list we find Jovanotti, Nannini, Cranberries, Elton John etc. 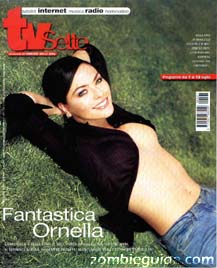 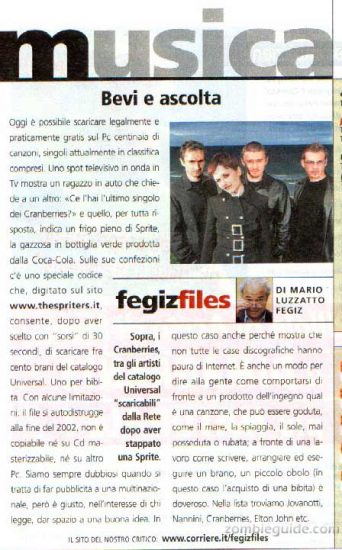 The second article, from Tutto, includes an extensive feature about The Red Hot Chili Peppers. The article includes a listing of bands who, like the Chili Peppers, didn’t find success right away, and The Cranberries are among them.
Here’s what it says:

CRANBERRIES
When the first album EEIDDISWCW? (1993) comes out, grunge and hip-hop is played. Result: in England the album sold only 12,000 copies, a misery. But it will be greatly re-discovered after its American success. 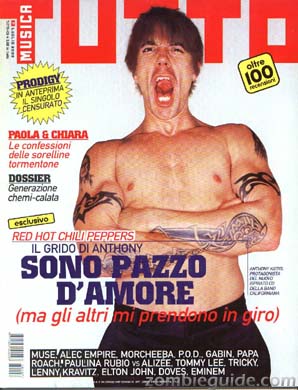 Thanks to Mattia of The Cranberries Videography for the scans and translations.