You are here: Cran World » The Cranberries » Greatest Hits gets a title & teaser

Greatest Hits gets a title & teaser

The Cranberries Official Website has updated today with a brand new look on its opening page: a teaser for the band’s upcoming greatest hits disc, which is now officially titled “Stars: The Best of The Cranberries 1992-2002”. The intro now scrolls amusingly in Star Wars-esque text, well befitting of the song title, and set to the opening of “I Still Do.” As for a date, it reads only: “Coming Soon.” So whether it is September (like the official Italian site reports) or Christmas (as the main official site last reported), we’ll know soon. 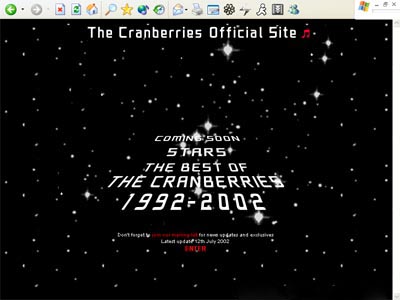