You are here: Cran World » The Cranberries » High-Res “Tutto” Scans and Info

We told you earlier today that Dolores was in the newest issue of Tutto, but we had no idea she was on the cover. But now we know, and we’re happier because of it!

Dolores tells Tutto that during the band’s most distressing times, she was depressed, confused, tired, and she often went overboard on alcohol. She was also trying desperately to get out of a taxing relationship with longtime boyfriend Miko Mahoney, when her husband Don met her and helped her through. And since no Cranberries interview is complete without at least a mention of the band’s recent “arrivals,” Dolores hopes that Molly, now almost two, won’t get into the commercial likes of Britney Spears or Christina Aguilera, but instead finds interest in more heart-felt female singers like Chrissie Hynde of The Pretenders, Sinead O’Connor, or Skin. While on the topic, Dolores elates that it’s even better to be a mum than be a singer! Rounding out the interview, she also reminds us once again that she would like to land a film role sometime in the future.

The live and backstage photos were taken from earlier this year at the jacket-required Monte Carlo venue. Oh, and as if you needed any more reason to buy this issue, it comes with a free 4-track Bjork live and remix CD, in preparation for her Greatest Hits due out in October.

Perhaps if someone could mail us a full translation, we’d be more than happy to post it.

Huge thanks to Lorenzo and Klarebel for the fantastic scans! 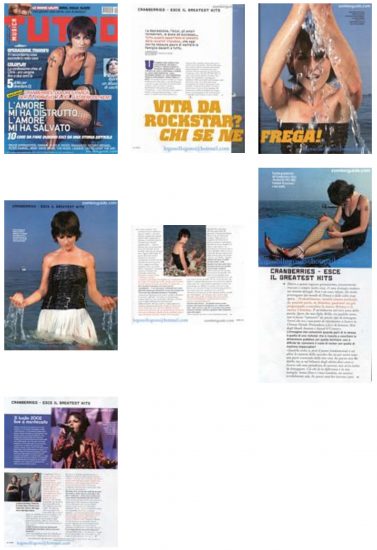