You are here: Cran World » The Cranberries » 2FM Performance Report and Photos

September 6, 2002  |  Comments Off on 2FM Performance Report and Photos  |  by Zombieguide Archives  |  The Cranberries

At 11 o’clock local time this morning, The Cranberries stepped into the studios at 2FM in Ireland to perform an hour-long all-acoustic performance. Luckily, it wasn’t an “all-hits” performance, as the intense numbers “Dying in the Sun” and “Chocolate Brown” were slipped into the mix. As even more of a treat, listeners heard the first-ever acoustic performance of “Stars,” the band’s newest single from the upcoming album of the same name. The full setlist was:

Shortly after performing “Stars,” Dolores talked for the first time about what inspired her to write the song. “I was actually walking in Kilmallock at my home … you know what I’m saying about kids, how they put a challenge back in your life, well then we [myself and Don] have these mindless tiffs about nothing, when you have kids right, because you’re always so busy, like, ‘Hi,’ when you’re passing in the corridor, ‘How are you?’. So it was one of those tiffs, like, and I went out of the house all hot and puffy and mad and stuff. And I took my daughter in the pram to the studio — we have a studio near the house where the band rehearses — so I was walking over to the studio and I was in a temper,” she admitted. “And then I thought, maybe it’s me, and then I was thinking about my book Men Are From Mars, Women Are From Venus or something that I read. I thought, maybe it’s me and maybe I need to chill, right? So I wrote it kinda thinking that maybe I’m not so perfect, maybe … I should give a little bit, maybe it’s not me.”

She continued, “And I was thinking as well, that’s the problem, people are married for years and years and years and you get to know each other on different levels when you become parents and all that stuff, right? But the thing is to remember who you fell in love with and not to try to change the person. That’s what they say in books, right? And that’s one of the most important keys to success in marriage, I think, if you can do it. Anyway, I wrote the song there with those thoughts in mind… and then at the end I say, does anyone love the way they are though? Is anyone perfect? I mean, do you look in the mirror and say, ‘God, I’m so perfect’? You don’t really, you know.”

“Remember who you’re talking about now, he probably does!” Fergal quipped at Don.

We’d end it here, but today was no ordinary day for the band — after all, Dolores turns 31 years old today (and it also commemorates the 10th anniversary of the NNTA song “Twenty One”). Off the air, 2FM presented her with a birthday cake which she dug into (literally!) and show host Gerry Ryan was even lucky enough to win a kiss from the birthday girl. Happy birthday, Dolores!!! 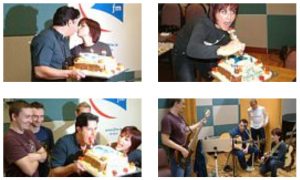