You are here: Cran World » The Cranberries » Hi-Res Scans from “Mix,” “Women Who Rock”

The Cranberries make their appearence in a few American magazines this month (!!) and we’ve got the scans to prove it.

Yesterday, we told you that there was an article in the September issue of “Mix,” and so we dutifully tracked down a copy of the industry-oriented magazine and made some scans of the quarter-page article. The text is the same as the online article, but the print version includes a highly-saturated live photo from the July 2nd show in San Franciso. The inset photo shows Front of House Engineer Joe O’Herlihy leaning over his beloved mixing board.

There’s an even bigger surprise to be had in the upcoming Fall issue of “Women Who Rock”; Dolores will evidently be getting some hefty coverage in the autumn issue! The Summer edition includes a tasty preview picture in their “Coming Attractions” section (seen below) of Dolores holding up some canned cranberries.

No word yet on when exactly the Fall issue of “Women Who Rock” will be released, but we’ll be eagerly awaiting it and we’ll have scans as soon as we get it in our hands.

Of course, this makes us very guilty of Cranberries Sin and Confession #25: “You buy a whole magazine or newspaper for that little review or picture of them.” 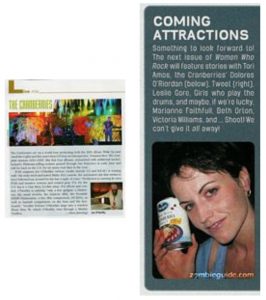