Zombieguide has gotten some scans of the UK version of “Stars,” and although not as extreme as the Taiwanese changes, the UK version also shows some cosmetic differences.

The major difference in the UK version — and the reason that might prompt some collectors to import it — is the inclusion of the “Zombie” CD-ROM video on the bonus disc. The disc is labelled as the “UK Limited Edition CD,” so it is likely that the video enhancement is exclusive to the United Kingdom.

As you can also see, there are new stickers on the front and some minor changes on the back, so take a look below.

We’ll have much more on “Stars” in the coming days as the CD launches all over the world. 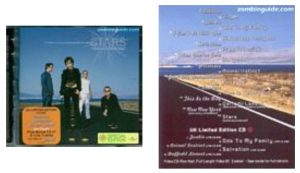