It’s been nearly eight years since the classic video for “Zombie” was filmed, with shots in Los Angeles, Dublin, and Belfest, directed by Samuel Bayer. But with the UK release of “Stars,” which includes the music video for “Zombie” as a bonus, something appears to be immediately amiss from the memoriable clip.

As many fans should know, the basis for the song is on the political strife that has burdened Northern Ireland for much of the 20th century as much of the religious-based conflict waged over rule of the northen counties. A car bomb that killed a child in 1993 was Dolores’ immediate inspiration to write the song “Zombie.”

The UK version of “Stars” includes what appears to be a censored, edited version of the video. Footage from the original video — like that of children pretending to be soldiers with bayonettes and guns — has been removed completely, replaced by alternate black and white footage of the band or the gold crucifix footage. Likewise, footage of the outdoor murals of IRA propaganda and other outdoor scenes filmed in Belfast have all been removed in this new cut of the video.

Scenes removed from the new version of “Zombie”

As a result, all outdoor sequences have been removed from the new cut of the video. Only the black and white footage of the band and the color “gold crucifix” footage remains, all of which has been reworked to span the full length of the video.

Phil C, a fan from Northern Ireland, who sends us this news, theorizes that “they have censored the video in respect of the current political climate in Northern Ireland. People have moved on and don’t want to dwell on images of the past. Northern Ireland is a very different place today compared to when the video was recorded.”

The timing of this seems suspicious, as the “Stars” DVD, which will include all the band’s music videos to date, will be released in November. The question at hand is, will this new cut be put onto the DVD in place of the original video?

Should The Cranberries edit a classic video eight years after it was filmed, just to adapt to current political conditions? This is sure to raise some interesting opinions among fans, so be sure to sound off at the Zombieguide Forums.

In addition, Phil has sent us some screen captures of the enhanced UK “Zombie” video, which includes a very cool (Thorgerson-designed?) backdrop to the interface. Hopefully, we’ll have some captures from the “new edit” of the Zombie video within the coming days. 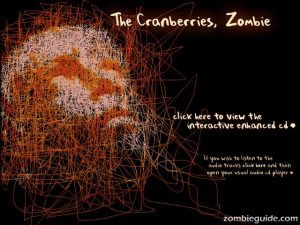 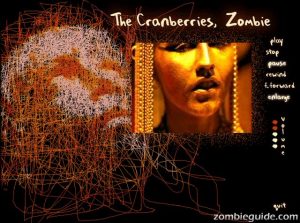