Universal Music Distribution has sent out it’s New Release Books for the first part of November to retails and included in its pages is a one-page sales sheet for the upcoming “Stars: The Best of Videos 1992-2002′′ DVD, which is due out in America on November 12th. Zombieguide has obtained an exclusive scan of the page, which you can see below.

The sheet gives a full list of the DVD’s tracks and bonus features, and there are both surprises and a few slight disappointments to be had. You can read the entire listing on the scan, but here’s just a quick look at some of the bonuses:
»  Full Vicar Street Performance (Nov. 11, 2000)

Among the “alternate videos” is the long-lost and highly elusive original video for “Ridiculous Thoughts,” the second version of “Dreams,” an alternate version of “When You’re Gone,” and the original unedited version of “Analyse”.

On the down side, the band’s two oldest and most elusive videos, “Uncertain” and the first cut of “Dreams,” seem to be missing from the new release. While a full version of the original version of “Dreams” is available thanks to the Internet, only a few seconds of the “Uncertain” video are known to be available to the public (There were three videos recorded for “Dreams”; the second and third are included on the DVD.). A streaming version of the original “Dreams” video can be viewed in the Zombieguide Media Vault. It seems that we won’t be seeing the full version of “Uncertain” anytime soon.

Also, it should be noted that the “cover art” included on the sheet says “Not actual cover,” which means that the art has yet to be finalized (The mock- up art shown is taken from the front of the UK “Stars” promo).

Well, there you have it, exclusively here first!! 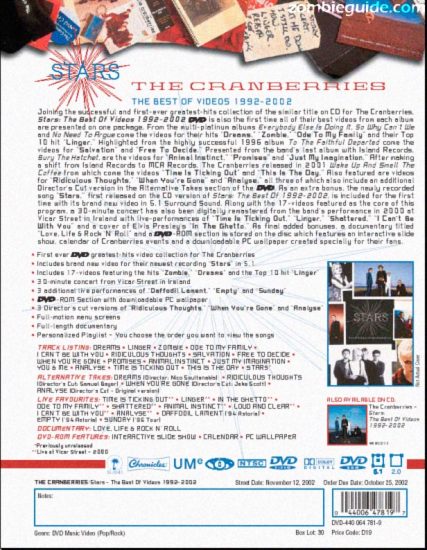