You are here: Cran World » The Cranberries » “Pavarotti and Friends Collection” to release on DVD

“Pavarotti and Friends Collection” to release on DVD

November 8, 2002  |  Comments Off on “Pavarotti and Friends Collection” to release on DVD  |  by Zombieguide Archives  |  The Cranberries

The four DVDs will be housed in a slipcase, with a booklet containing the tracklisting for each DVD, and the menus will also support multiple languages. Dolores’ performance for Pavarotti and Friends for the Children of Bosnia will be contained on Disc 2, which includes her “Linger” duet with Duran Duran’s Simon LeBon and the “Ave Maria” duet with Pavarotti (which was recently included in “To the Faithful Departed: The Complete Sessions 1996-1997”). The list of other artists that appear in the set is huge, including U2, Ricky Martin, Bon Jovie, Stevie Wonder, and Elton John, just to name a few.

The luxorious set will be released on November 12th in the United States with a retail price of US $79.95, no small change for sure. But you may be heartened to know that much of the proceeds from the sale of the set will go to benefit War Child’s Mostar Music Centre. War Child is a charity that Dolores has supported several times in her career, and doing so was no doubt a strong influence in the “To the Faithful Departed” ballad of the same name.

“Pavarotti and Friends for the Children of Bosnia” was released last year separately on DVD in Asia only. However, with limited numbers of NTSC printings and its import status, it was an extremely hard (and expensive) item to locate, with some importers wanting upwards of $60 for the single release. 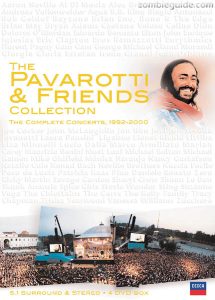