December 27, 2002  |  Comments Off on Vatican Broadcast Screen Captures  |  by Zombieguide Archives  |  The Cranberries

This past Tuesday, Italain channel Canale 5 made their traditional yearly broadcast of the Concerto di Vaticano in Natale (Vatican Christmas Concert). This year, Canale 5 changed the order of things, putting the finale “Happy Xmas (War is Over)” as the first part of the concert, where all the invited artists performed together. Dolores’s “Linger” and “Adeste Fideles” was broadcasted later. Also included as part of the broadcast was December 13th’s private meeting between the Pope and the Vatican concert performers. During that segment, Dolores’s son Taylor could be seen kissing the Pope’s hand, one of only a few rare moments where Taylor has been seen on camera.

Below are some large 800×600 (larger views no longer available!!) screen captures taken from Dolores’s “Adeste Fideles” performance, broadcasted on Canale 5. Thanks once again to Matteo for the screencaps. 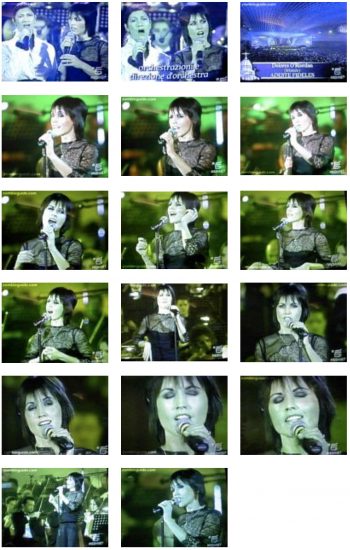