After last June’s somewhat vague press conference in Mexico City, where The Cranberries displayed some implicit displeasure at the state of affairs at MCA/Universal, fans have been waiting for a solid follow-up announcement to come — but no one knew when. That announcement came today.

“The Cranberries today announced that they have terminated the remainder of their recording contract with MCA Records, a division of Vivendi Universal, effective immediately,” reads the first line of a press release posted today on the band’s official website.

The Cranberries originally signed a 10-year six-album contract with Island Records America in the summer of 1991. In 1998, Island was engulfed by the mammoth Vivendi Universal. “Bury the Hatchet” was the first Cranberries album released after the massive shift and its effect was apparent.

A solid example of this was seen in Dolores’s 1999 interview with Craig Kilborn, where she said Bury the Hatchet was, “going pretty good, it’s just that alot of fans are coming up, going, ‘Oh, Dolores, have you guys got a new album coming out?’ And I’m like, ‘It came out six months ago!’, so it’s that kind of thing.”

She further continued with her dissent, “It’s [Bury the Hatchet] doin’ OK, like, but alot of people don’t really know it’s out and stuff, ’cause our record company [Island] got bought out, so at the moment it’s a bit messy over here [in the United States].”

Hoping that MCA Records, another American-based company, would give them more of the personal touch that the post-merger Island Records lacked, The Cranberries silently hopped labels in the fall of 2000, although it was not made known to fans until May of 2001. However, the change was not a dramatic one since MCA too was under Universal’s giant corporate umbrella — the band was simply moving from one part of Universal Records to another. 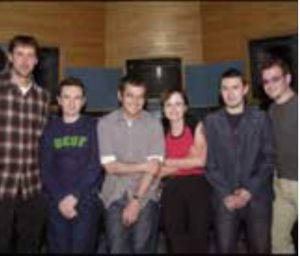 Jay Boberg, President of MCA, with Stephen Street and The Cranberries

Although both the band and MCA’s representatives were optimistic at the new relationship, things began to go sour months after the release of “Wake Up and Smell the Coffee.” Fergal Lawler wrote shortly after embarking on the American tour in spring of last year that, “We weren’t sure what to expect as some (not all), members of our record company informed us that in their eyes, ‘Wake Up And Smell The Coffee’ is ‘over’ in America, and they have moved on to other things. Not exactly the words of encouragement you would like to hear as you are about to embark on a U.S. tour!!! But thanks to you, our incredibly supportive fans we say F*** ’em!!! We are here to play music and enjoy every minute of it, and thankfully that’s the way it’s been working out!”
Last June in a press conference held in Mexico City, The Cranberries made it clear that they were looking forward to ending their contract with MCA, although no specifics were given at the time.

After the release of “Wake Up,” The Cranberries put out their “Treasure Box: The Complete Sessions” boxed set and “Stars: The Best of The Cranberries 1992-2002” later in the year, both on Island Records. However, this may have been more for simplicity’s sake, since the overwhelming majority of the material in both releases was owned by Island.

“Since we were signed in 1991 by Island Records, we have gradually seen our label dissolve from a pioneering independent spirited label into a corporate monolith that completely lost touch with the group’s creative vision” stated singer Dolores O’Riordan in today’s press release. “All of the people we have worked with over the years (in America and England) have been fired or left the company, so the band felt it was time to move on to new opportunities.”

“The Cranberries have released two albums in the past 15 months selling in excess of 3.2 million albums worldwide. Despite the current downturn within the music industry and little support from MCA in North America, the band have also performed 82 concerts to 600,000 people during that time.

The release continues saying, “‘We have had great fan support throughout the world for many years,’ added guitarist Noel Hogan. ‘With little effort from our label, we have been pleased to see top 10 sales in many countries. The band is excited about the prospect of a new beginning, starting fresh, and looking forward to another ten years in the music business. We expect to have a new album released by the end of 2003.’

“The Cranberries are in the midst of celebrating their 10th Anniversary as a professional group. Career sales now exceed 38 million albums. The band are planning a tour later in the year, which they hope to confirm in the coming weeks”

No matter how you look at it, this is big career-changing news on the half of the band. At this point, no indication is known of whether the group will look to another label, or (more likely, it seems) will take their own approach, so to speak, whatever that may be. Zombieguide will have more on this developing news as we know it — watch this space!