You are here: Cran World » The Cranberries » A Walk In Dolores’s Shoes

A Walk In Dolores’s Shoes

Ever wonder what it would be like to take a walk in Dolores’s shoes? Well, now you can…sort of! In an effort to support the Chernobyl Childrens Project and Amnesty International, The Cranberries are putting the shoes that Dolores wore in the infamous “I Can’t Be With You” video up for auction. If you can spare an extra €1,511.50 ($1,640 US) or more, you could be the winner! (That’s the winning bid as of January 25th at 3:30 pm EST.) And as if this pair of Dolores’s shoes aren’t enough to prompt a trail of drool on your chin, the winner of this charity auction also gets the Beneath The Skin – Live In Paris DVD; the Stars – Best Of Videos DVD; the lastest tour poster— signed, nonetheless; both “Wake Up And Smell The Coffee” and “Stars – Best of 1992 – 2002” — on CD and also signed by the band; AND a copy of the “Treasure Box” 4 album set! It’s enough to make a Cran fan cry. Suddenly sixteen hundred bucks doesn’t sound so bad, does it? And after all, it is for charity! To place your bid, or simply find out more on the Cranberries charity auction on Ebid, visit the Official Site. And hurry… these shoes were made for walking so on January 31st, the auction comes to a close! 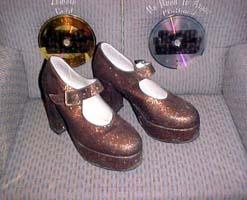