“A new five-track demo of superior quality was cut, a showcase gig was set up at O’Henry’s Club in Cork, and an eager audience of A&R men (music biz speak for talent scouts) assembled to run the rule over the latest hopefuls to emerge from Eire.” –Michael Heatley, The Cranberries: The Unauthorized Edition

But what’s important now is that the entire demo is here for your downloading pleasure exclusively on Zombieguide.

As with nearly all of The Cranberries’ early releases, the demo is a compilation of old and (at that time) new demo tracks. For example, the recording of “Nothing Left at All” that appears on “Uncertain” is the same one used in the earlier “Nothing Left at All” demos; the tracks used in the Dave Fanning Sessions consisted of both new (“False,” “Like You Used To”) and old demo recordings (“Linger,” “Take My Soul Away,” released earlier as “Shine Down”). The same goes for this untitled 5-track demo. As a result, four of the five tracks have all been previously to savvy Cranberries fans via the Internet, especially since many of these recordings appeared first here on Zombieguide, thanks to Fergal Lawler himself.

Speaking of the Xeric demos, it seems that many of the tracks that we had labeled as “Xeric Demos” are actually taken from this 5-track recording. (“Xeric Demos” was not the title of any actual demo release; the tracks were labelled as such when we received them, and we had no knowledge of which actual release they came from.)

As for the second-generation copy of the 5-track demo that we received, its original sat in the hands of Island Records in Australia for several years before it was finally given away.

The tracks below are linked to their respective cross-linked releases:
(LINKS NO LONGER AVAILABLE!!)

These MP3s are now available in the Zombieguide MP3 folder.
But now with all that said, there is a new gem to be unearthered in this find, namlely a demo version of “Them,” the track which concluded the Uncertain EP and was used as a B-side for “Everybody Else Is Doing It, So Why Can’t We?” The most crucial elements of the track are the same: both the vocals and guitars are essentially the same as the “Uncertain” version. But to veteran fans who are familiar with the “Uncertain” EP version of the track (the same version used as a B-side for “EE…”), the differences will stand out immediately. Both the sound effects and percussion are noticeably different. While there are still the defining water-like effects, these effects are different from the ones used on “Uncertain.” In addition, the sound of a howling wind has been added to the introduction of the song and carries through to the end, an element which was cut from the “Uncertain” version of the song. The drums are also different — the demo version heard here includes a rather loud, resonating tom-tom (or possibly bongo). The beat in the later “Uncertain” release, although similar, is much more sedated. All of this would suggest that although the basic elements of the song (vocals, music) were re-used, the song underwent several edits before the song saw a commercial release in 1991.

Below are scans taken from the original demo tape. As can be expected, the cover is hand-written in the same handwriting which appears on most of The Cranberries’ other early releases, probably belonging to Pearse Gilmore himself, or possibly Noel Hogan, who had by that time quit his job reparing cash registers in order to spend time mailing out demo tapes. As plain as the sleeve is, sans a serial number and bearing only the band and producer’s name, the tape itself is even plainer — no writing whatsoever, only a blank label on one side. What more could be expected of one of dozens of tapes which were painstakingly labelled by hand and sent to record companies?

Thanks to Bruce for help with the scans. 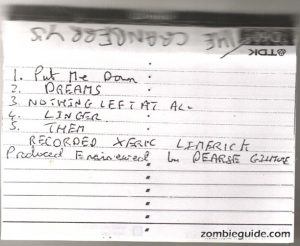 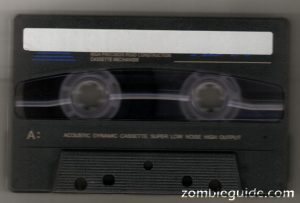