You are here: Cran World » The Cranberries » Autographed Guitar Fetches $3500+ For Belgium Charity

February 3, 2003  |  Comments Off on Autographed Guitar Fetches $3500+ For Belgium Charity  |  by Zombieguide Archives  |  The Cranberries

An autographed Cranberries guitar which was auctioned off in December in Belgium has fetched €3300 (nearly $3560 US) for the Levenslijn Kinderfonds (Lifeline Child Fund). The focus of the recent auction was to promote road safety for children. The guitar was sold in a live 10-hour day-long auction held by the radio station Q-Music.

Other items auctioned off included a signed poster from Joe Cocker, a self- portrait in marker by Moby, autographed vinyl singles from Celine Dion, and a pair of meet-and-greet tickets to meet Tiger Woods. The biggest money- maker was a gold-pated record of David Bowie’s “Scary Monsters” (1980), which brought in €4500. In total, the auctioned items totalled over €25,000 for the charity, matched with another €25,000 donated by the Belgium radio station Q-Music.

“Hi, we’re The Cranberries, and we’d just like to say that we’ve been made aware of the fact that the number 1 cause of death in Belgium is car accidents among young people,” says Dolores in a short promotional clip that can be found on the auction’s website. “And basically it’s really worth slowing down, and you know, if you go out and you party and you want to get out of your head, absolutely fine, just make sure the person who’s driving is not out of their head.”

Rather, Dolores recommends the driver remains “in their head, in their heeeaadd.”

She continues with due seriousness, saying, “And make sure that things are in control because life can be short and nobody wants to end up like that, OK?”

“We’re gonna sign this guitar and hopefully it’ll make some money toward this worthy cause,” Fergal added. 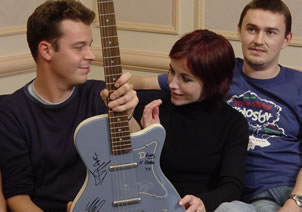 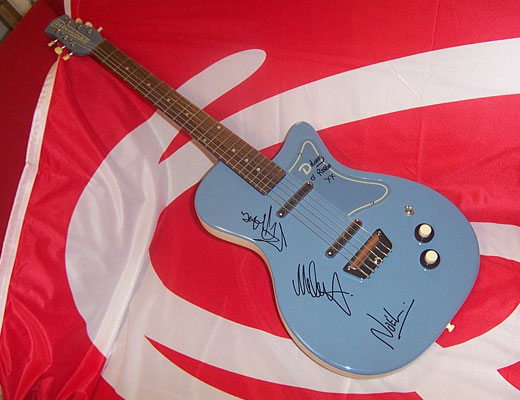