Cranberries Among Most Pirated in Mexico

February 6, 2003  |  Comments Off on Cranberries Among Most Pirated in Mexico  |  by Zombieguide Archives  |  The Cranberries

In a study released by the The International Federation of the Phonographic Industry (IFPI) (the international equivalent of the RIAA), the organization reports that The Cranberries are one of the most bootlegged artists in Mexico. The IFPI estimates that nearly 40% of the music sold in Mexico is pirated, making it a “priority country” for the organization. Unlike the commercially-produced live bootlegs so sought after by collectors (most of which originate from Europe), the overwhelming majority of these sales are copies of normal studio albums, like the recent “Stars.”

“I went to the Zocalo which was the downtown part of the city and they were having a little market and there are booths were you can buy pirate copies of CDs,” reports Mummbz, a Cranberries fan back from a recent trip to Mexico City. “And they had ‘Stars,’ but they were sold out. They were really cheap copies too, $1.50 a copy. Granted it’s illegal but, hey, people bought the CD for its music right?”

Other international artists hit hard by the widespread copies include Santana, the Backstreet Boys, and, unsurprisingly, U2. Local top-selling Mexican artists are also heavily pirated.

“Here in Mexico we do love the Cranberries but, about the pirate copies, that’s something we are not proud of,” says Mau, a resident of Mexico. “I’m sure you realized that you can get almost any CD you like for even less than $1.50 USD each (and if they don’t have it, they can get it), but that’s going against the artists themselves. If people buy original CDs instead of pirate ones, I’m sure The Cranberries would have sold 3 or 4 times more original CDs than they have so far. This is also why some artists don’t come to Mexico or Latin America, they think that they’re not selling well here, but that’s because people prefer the cheaper prices of piracy.” 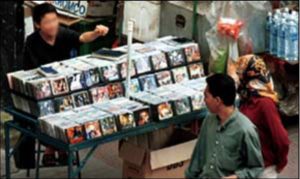 Bootleg markets, like the one seen here, are common in Mexico, parts of Europe, and in Asia (Photo: AP)

The IFPI estimates that legitimate music sales in Mexico comprise about 2% of the total retail sales of music in the world.