The Turkish music magazine Blue Jean has a very special Cranberries bonus packed in with their March issue, which has just hit newsstands. Apart from the magazine itself, the issue carries a 18-page bonus Cranberries mini booklet filled with the usual suspects: biography, lyrics, and a discography. Also included are eight Cranberries stickers that you can pull out and stick onto your favorite stuff. Best of all, the bonus booklet includes previously- unseen photos, claimed to be exclusive to Blue Jean.

The timing may seem strange for such a lavish promotional item, but Blue Jean is no strangers to such unexpected releases. In late 2000, while The Cranberries were in the studio recording “Wake Up and Smell the Coffee,” Blue Jean issued a promotional CD/CD-Rom entitled “Greatest Hits,”seemingly out of nowhere. (The Blue Jean “Greatest Hits” promo is not related to “Stars.”) The magazine has given equally good treatment to the Limerick quartet since then, giving them a cover article with the release of “Wake Up” in 2001, and a 2-page interview this past December.

The booklet does not bear any marks of licensing from Universal Music, which would only make sense after January’s announcement that The Cranberries were terminating their contract effective immediately.

Below is a shot of the cover of the booklet, showing an alternate photo from the “Stars” cover.

Huge thanks to Yagiz for the news. If you live in Turkey (or by some other act of God have managed to obtain a copy of the newest Blue Jean) and can make more scans of the new booklet, please send them to us! In the meantime, Zombieguide will have new scans posted as soon as they are available. 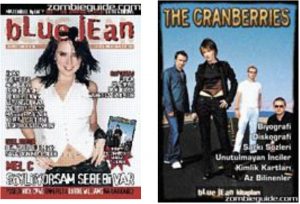