You are here: Cran World » The Cranberries » Details on Secret Hot Press Gig

You’ve no doubt read by now on the Official Cranberries Website that this past Friday, The Cranberries played a secret, unannounced 3-song set for the launch of the “Hot Press 2003 Yearbook” in Dublin. Zombieguide has some of the nitty-gritty details from that event.

The Cranberries played at Dublin’s intimate Sugar Club this past Tuesday, the 25th, performing “Chocolate Brown,” “Dying in the Sun,” and “Linger.” Other entertainers for the night included Jerry Fish and the Mudbug Club, Think, Maria Doyle Kennedy, and the D1 DJs.

Guests included members of Altan, Skindive, Blo.tooth, The Chalets, Blink, Skyjack, The Jimmy Cake, Sack and The Saw Doctors. Woodstar was also there for the party, who opened for The Cranberries at The Point Depot on December 6th in Dublin. Also in the audience were artists Paddy Casey, Mary Stokes, Roesy, Mary Coughlan, Neosupervital, La Rocca and Perry Blake. Plenty of industry heads were also present for the private party.

We only have one shot of the concert, below, courtesy of Hot Press. Dolores can be seen with quite possibly the longest naturally dark hair that we’ve seen her have during her entire career! Will she keep it that way? Only time will tell.

Thanks to Jessica van Kessel for sending the news details.
Seen any other info about The Cranberries’ ultra-intimate gig at The Sugar

Club this week? Send it to Zombieguide! 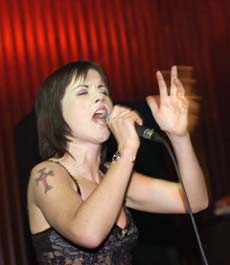