You are here: Cran World » The Cranberries » Planet Rock Profile to Air in the US in May

Planet Rock Profile to Air in the US in May

The Cranberries’ Planet Rock Profile special, originally recorded in 1995, will finally be aired for the first time in the United States next month on “premium” channel Showtime Next.

The interview was conducted by legendary Irish DJ Dave Fanning, whose name should sound familiar to diehard Cranberries fans. In 1992, The Cranberries recorded a set of demo tracks for the Dave Fanning Radio Show, which resulted in the only known studio recordings of “False” and “Like You Used To,” along with demo versions of “Put Me Down” and “The Icicle Melts,” among others. Dave Fanning is often given the extraordinary credit of bringing budding “garage bands” like The Cranberries and U2 to the limelight in their home country of Ireland, long before the groups gained international stardom.

The Cranberries’ episode was recorded in 1995 by EMI Productions for the Euro channel ARC. However, the US-based Showtime network recently picked up the rights on the series and is running a different episode every week. Here are the showtimes for the ‘Berries half-hour episode: 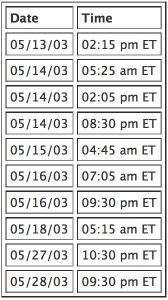 The band discusses topics like their early days with singer Niall Quinn, male chauvinism in the music industry, tacky tabloids, and that horrendous “Zombie” dance remix by A.D.A.M. For those that won’t get to see the interivew, or for those that just want a sneak peek, check out the screen grabs below from the interview.

Showtime Next is part of the Showtime Unlimited extra-cost premium cable package, although “Next” is not available in all areas. Contact your cable or satellite provider to see if the channel is available.