You are here: Cran World » The Cranberries » Fergal Interview in “Eres”

The February 16th issue of the USA edtion of “Eres,” a magazine in Spanish, includes a two-page interview with Fergal Lawler, “direct from Ireland.”

The interview looks to be taken during the “Stars” tour, however since Fergal was in Ireland at the time he gave the interview, it could easily be more recent, although “Stars” and touring take up a good portion of the interview.

Fergal gives some brief commentary on the band’s current and future projects. “We want to work in a way that’s different to what we’ve done before. What normally happens is that we arrive at the studio with the finished songs, record them, and start to add the lyrics. Now what we’re doing in the studio is to compose it there and see how things develop.” More interestingly, when asked about producers, Fergal reveals that the band is very open to working with new producers in the future, despite their penchant for Stephen Street. “I believe that, for everyone, Stephen Street [has influenced us the most]. To work with the others has been an interesting experience, [and] in the future we will continue doing it with different producers.“

Another interesting thing said in the interivew was that “Before we had kids, there was nothing to worry about, while when you have them, they bring responsibility with them, you worry about them.” We only recently learned that Fergal’s youngest son, Nathan has been suffering with glaucoma in both eyes, which is certainly reason enough for him to be worrying. Thankfully, Nathan is reportedly well on the way to a full recovery.

Below is the fully translated interview. High-resolution scans can be found at the bottom of the page and will be added to the Magazines Gallery along with the rest of the recent print articles.

Everyone remembers Salvation, Zombie, Linger, and Dreams, successful songs that have made The Cranberries today considered one of the most important groups from Ireland. Now they close an important chapter in their history with Stars, a compilation disc. Fergal Lawler (drummer) tells us about it.

The past… is past

It’s already been 10 years since your first disc was released. What are the best experiences that you’ve had?
There’s been plenty. We’ve been through good and bad moments in those ten years, but definitely, we have been through a lot more good times than disasters.

Is it difficult to belong to a band with two brothers?
No, it’s been very easy, because they have an uncommon relationship as brothers. Above all they’re friends, they get along well, not like Oasis.

Why do you believe that a lot of groups that have a style similar to yours and started about the same time have separated, and you continue?
When we started, our goal was always not to change into something trendy. It was always “imagine recording five or six discs” or “to be together as a group for more than ten years.” It’s really like a marriage, you’re working with other people and you’re very close to them, and at times it can be very difficult, so for that we give each other a lot of space. Everything seems to have worked out well.

After the success that you’ve had, is it hard to keep your feet on the ground?
Not really, we continue living in Limerick, which is the city where we grew up. Every time we return, we separate ourselves completely and start to be treated like normal people, you don’t have admirerers following us, or anything like that.

I noticed on your official site that you’re the one that gets the most involved with the fans.
It’s something that I just started to do with my free time in 1997. I was surprised with the internet and the official pages of some groups, so we decided to make our own and start to write a diary or something like that, which interested me more than anybody, and its something that I continue doing.

On the compilation you included Daffodil Lament, which was voted by the fans as their favorite non-single. What’s yours?
There’s a song on the second disc called Disappointment, that’s one of my favorites. I don’t know why but it has something that I really like.

Why were the singles Hollywood and You and Me only released in certain countries?
In some places, the discs that included those songs, To the Faithful Departed and Bury the Hatchet, had a longer lifetime, so the record company asked us for more singles and we told them yes, so those were the ones that we chose.

Of the producers that you’ve worked with, which has influenced you the most?
I believe that, for everyone, Stephen Street. To work with the others has been an interesting experience, but in the future we will continue doing it with different producers.

Has there been jealousy that all the attention is given to Dolores?
No, never, and that’s how it’s been since we formed. It doesn’t matter what band you mention, it’s always the singer who receives the biggest amount of attention, and this is fine for us, we still enjoy playing.

All in the Family

How has the relationship among you changed since everyone has started their own family?
It’s a brilliant thing, that we’re already entering another period in our lives. Since we have kids, we relate to each other in a totally distinct form.

How has this situation affected the way you write songs?
When you become a parent, you become more more optimistic in how [you look] at life. Before we had kids, there was nothing to worry about, while when you have them, they bring responsibility with them, you worry about them.

Is it hard to be a parent and spend time on tour?
At first it was very difficult. Now we’re on tour for two to three weeks, and we return home for a week, after which we go back on tour another two or three weeks. We’ve done it that way to be with our family just when you start to feel lonely and tired, so we go home.

When you go home, what’s the most important thing for you: to rest or to spend time with your family?
Both, you just have to separate yourself and not think about the tour [or] the group, and make yourself a parent, a different person. You go out, do your shopping, take a walk, forget about the group.

Why have you decided to work differently on the new material?
We want to work in a way that’s different to what we’ve done before. What normally happens is that we arrive at the studio with the finished songs, record them, and start to add the lyrics. Now what we’re doing in the studio is to compose it there and see how things develop. 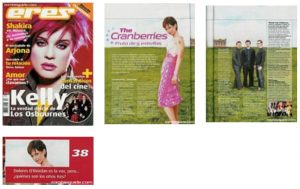