You are here: Cran World » The Cranberries » Cranberries Make Cover Attraction on “Radio Inside” DVD

August 19, 2003  |  Comments Off on Cranberries Make Cover Attraction on “Radio Inside” DVD  |  by Zombieguide Archives  |  The Cranberries

In the mood for a good “coming of age” flick saturated with mid-1990’s flavor? 1994’s “Radio Inside,” newly released on DVD, may not have won any Oscar nominations or make for a prized piece in your DVD collection, but it does have one thing going for it: a soundtrack featuring music by The Cranberries that garnered attention from movie-goers and film critics alike. Even the cover of the new DVD boasts “music by The Cranberries and REM”. The soundtrack includes “Dreams,” among other songs.

The film is now on DVD courtesy of the Australian studio Capitol Films. Although the DVD is region-free, it is likely in PAL video format only, not North American NTSC.

Reciting the story of two brothers in love with the same woman, “Radio Inside” stars Williams McNamara, Elisabeth Shue, and Dylan Walsh. The film marks the directorial debut of Jeffery Bell, who is best known for his behind- the-scenes work on various pop culture television favorites of the 1990’s, like the “X-Files”.

Though the film fared with only mediocre reviews and lackluster attendance at the box office, critics rave about the movie’s soundtrack, with the inclusion of The Cranberries’ music commonly noted as poignant and relevant to the film’s dramatic, romantic tone.

“Radio Inside” on DVD is available for purchase online, priced at about $20 at shops like totaldvd.com and widely available on VHS for as little as $1. So if you’re a completist or just curious, “Radio Inside” may be worth a look. 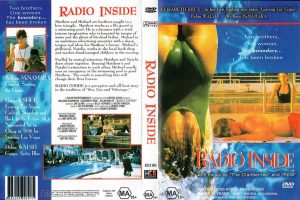