You are here: Cran World » The Cranberries » “Stop The Rumors!” An Artistic Look at the Two-Year Break

“Stop The Rumors!” An Artistic Look at the Two-Year Break

November 3, 2003  |  Comments Off on “Stop The Rumors!” An Artistic Look at the Two-Year Break  |  by Zombieguide Archives  |  The Cranberries

It’s too bad the album title “Rumours” has already been done (snatched up by Fleetwood Mac in 1977), because lately, it seems that this would be the ideal title for the Cranberries’ sixth album. Amidst all of the mayhem of “will they or won’t they” ever return to the studio, fans are left wondering: how are The Cranberries coping with the allegations, insinuations, and the ever popular out-of-context publications?

Well, for a little poetic answer to that question, Zombieguide presents an astonishing creation by mesmerizing cartoonist, Maurizio di Bona aka The Hand. Cranberries fans may remember that it was The Hand who, earlier this year, was asked by The Cranberries to produce artwork for official band merchandise. Created in an attempt to portray The Cranberries’ struggle to balance personal with professional, this one-of-a-kind illustration, entitled “Stop Rumours” was submitted to Zombieguide in an effort to help stifle the whirlwind of conclusions and remind fans that The Cranberries remain individuals with significant responsibilities that lie beyond the group itself.

Special thanks to the astonishing artist, The Hand, for kindly allowing Zombieguide to post this terrific piece of art! 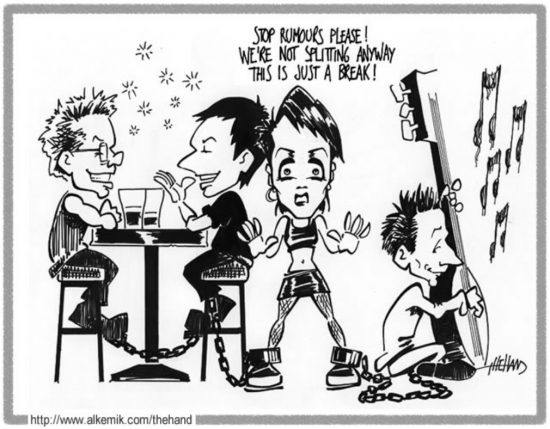