In their January 9th issue, editors of the Australian newspaper “Illawarra Mercury” compiled a list of the best songs of summer from the past 10 years, and The Cranberries’ are at the top of their list for the 1994-1995 season. In order to be considered, all songs on the list had to spend time at #1 on the Australian charts.

According to the paper, “Zombie” is one example of an “upbeat, party song that wedges itself so far into your head nothing short of a lobotomy is going to get it out… That song that is always being played in the car radio; the one that you’re singing in your head and you don’t even know how it got there. In fact, you didn’t even know you knew the words.”

“In the hottest months of the year we were listening to Dolores O’Riordan bang on about ‘their tanks and their bombs and their bombs and their gons’, Okay, the last word was actually ‘guns’, but her accent twisted it into ‘gons’. A serious song about the conflict in their Northern Ireland homeland, it might have skated under our… radar if it weren’t for the really cool grinding guitar that runs through the song. Released during the tail-end of grunge, it was a guitar sound we were used to.”

Here’s the full list of “Best Songs of Summer” that the editors picked for the past 10 years: 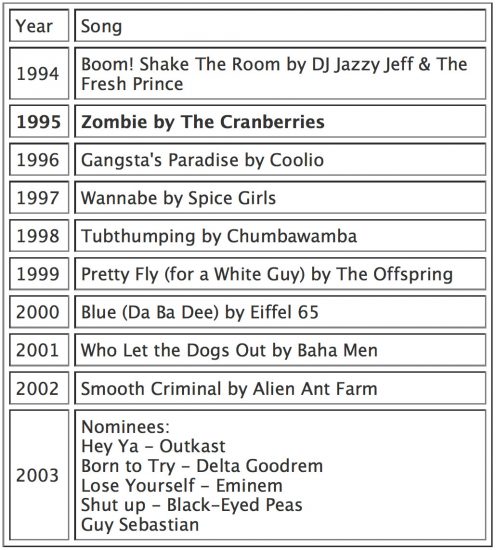 Other notable contenders of the past 10 years mentioned are No Doubt’s “Don’t Speak” and Oasis’s “Wonderwall.”